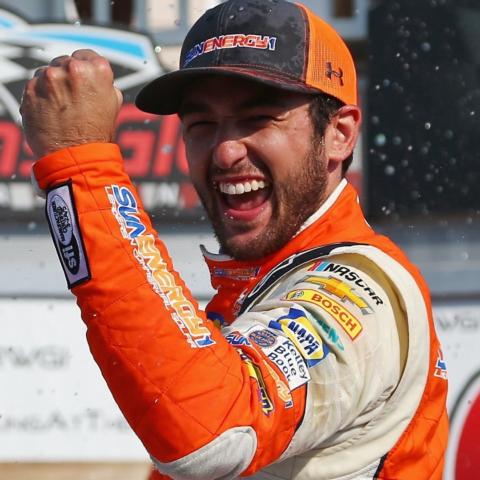 Defending NASCAR Cup Series champion Chase Elliott said recently of all the new additions to the 2021 schedule, he was “most interested” in the Food City Dirt Race at Bristol Motor Speedway.

The highly-anticipated Food City Dirt Race on Sunday, March 28 (3:30 p.m., FOX, PRN), will be the first dirt race for the NASCAR Cup Series in more than 50 years, and will also be the first Cup race to run on a dirt surface at the hallowed high banks of The Last Great Colosseum, which will feature 19-degree banking in the turns and a race surface that’s more than 50-feet wide.

Elliott, who won the prestigious NASCAR All-Star Race at Bristol last July and has contented for victory in several races at Thunder Valley over the years, including the Food City Supermarket Heroes 500 last May, is intrigued with the challenge that awaits the Cup Series stars when the green flag drops for the historic race that is sure to be a signature moment in Bristol’s celebration of its 60th anniversary season.

Here is the full interview (Bristol Dirt Section at roughly 3:20)

“The one that’s most interesting to me is the Bristol dirt race,” Elliott told NBC’s Steve Letarte during a recent interview to preview the 2021 season. “We’ve all seen road courses and that’s a big topic. What I haven’t seen is a Cup race on dirt. Especially a dirt race that’s that long. I felt like Eldora was a shorter event and a little different, so I’m just curious how the logistics are going to work. My biggest takeaway from Eldora is that race cars don’t have to be going super-fast to put on a good race.”

Elliott had a magical season in 2020, earning five victories and posting 22 top-10 finishes en route to his first season championship. He posted three Playoff victories and raced to wins in the final two Playoff races of the season to secure his series crown.

In addition to his All-Star Race victory at Bristol in 2020, he posted a seventh-place finish in the Bass Pro Shops NRA Night Race to advance to the Round of 12 and finished a disappointing 22nd in the Food City Supermarket Heroes 500 after running up front for most of the race. A late-race tangle with Joey Logano as the two battled for the lead in the closing laps ultimately ended his chance for victory in that event.

In preparation for the Food City Dirt Race, Elliott competed in the famed Chili Bowl in Tulsa in January, in an effort to “broaden his horizons.” Elliott finished seventh in the F-Feature in his first ever run in the highly-competitive dirt event that features powerful midget race cars. His Hendrick Motorsports teammate Kyle Larson won the Chili Bowl A-Feature for the second year in a row, and Elliott says he has been picking Larson’s brain at every opportunity to become a quick study about the dirt racing craft.

“I’ve been trying to learn as quick as I can,” Elliott told NASCAR.com. “Kyle (Larson) has been great, he’s been super open and honest talking about midget and dirt racing in general. As much as he’s willing to share, I’m certainly going to lean on him at least to help me get going. I’m excited to talk to him and learn some things that might be second nature to him, but that are completely foreign to me.”

As he delves deeper into dirt racing, Elliott said the biggest thing to adapt to is the insane pace of the races.

“I think that is the biggest difference for me is the intensity level is up from the get-go and not just the last 100 miles of one of our normal events, which is really cool,” continued Elliott, who will continue his dirt learning this weekend at a USAC Midget race in Florida. “You have to get going and if you have an opportunity you have to take it and I think that’s what makes this type of racing entertaining.”

The March race weekend at BMS also will feature The Camping World Truck Series’ Pinty’s Truck Race on Dirt (8 p.m., FS1, MRN), scheduled for Saturday March 27 under the lights. A limited number of grandstand-seats remain for this event, please click here or call the BMS Ticket Sales Center at (866) 415-4158.