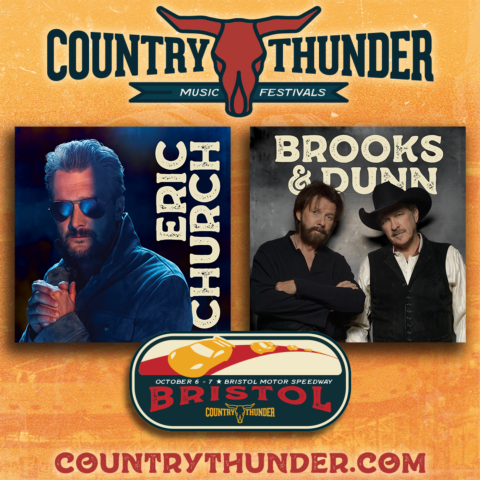 Following last month’s epic two-day throwdown at The Last Great Colosseum, Country Thunder Bristol will return with a vengeance to the iconic Bristol Motor Speedway in 2023. “The Chief” and the biggest-selling duo of all-time will create a one-two punch for Eastern Tennessee’s raucous, rowdy and rabid Country Thunder fan base at The World’s Fastest Half-Mile on October 6 and 7, 2023.

“The fans in Bristol and, indeed, the entire Appalachian Highlands region, have spoken,” says Country Thunder Music Festivals CEO, Troy Vollhoffer. “Eric Church is the artist fans ask for the most in this market, and we are thrilled to make it happen. In addition to Brooks & Dunn, and Eric, we will have a number of major announcements in the weeks and months ahead. After two years of massive crowds and meeting some of the best fans in America, we can’t wait to get back to Bristol and do it all again.”

A seven-time ACM Award winner, four-time CMA Award winner (including the 2020 award for Entertainer of the Year) and 10-time GRAMMY nominee, Church is one of the most electrifying performers in music as made evident by his 2022 Billboard Music Award for Top Country Tour. He is without peer on a concert stage,  while maintaining a reputation of pushing boundaries as a prolific and consistent recording artist. His recent three-part project, Heart & Soul, featuring his latest Gold-certified No. 1 “Hell of a View” and recent Top 5 hit “Heart On Fire” plus current single “Doing Life With Me,” is the latest in a critically acclaimed discography that features the Gold-certified Desperate Man (“Some Of It”), Platinum-certified Sinners Like Me (“How ’Bout You,” “Guys Like Me”), Carolina (“Smoke a Little Smoke,” “Love Your Love the Most”) and Mr. Misunderstood (“Record Year,” “Round Here Buzz”), the Double-Platinum certified The Outsiders (“Like a Wrecking Ball,” “Talladega”) and the 3x Platinum-certified Chief (“Springsteen,” “Drink In My Hand”), as well as 30 Gold, Platinum and multi-Platinum certified singles.

Brooks & Dunn are also no strangers to the highest peaks of the country music industry. Since the early ‘90s, much has changed and Nashville trends have come and gone, but the timeless country creations of Kix Brooks and Ronnie Dunn have endured. With 20 No. 1 hits stretching back to 1991, two GRAMMY awards, dozens of ACM and CMA honors and a discography counting more album sales than any duo in history – regardless of genre – Brooks & Dunn’s influence on today’s country has never been in question. Massive hits such as “Boot Scootin’ Boogie,” “My Maria” and “Believe” have propelled the duo to more than 30 million albums sold, with the New York Times heralding "together they helped drive the power-country era of the early-to-mid 1990s and continued to benefit from the sea change in the genre they helped initiate right through their most recent albums.” Their original “Merle Haggard meets The Rolling Stones” vibe made them progressive stars in their own right. The duo’s recently released collaboration project REBOOT debuted at No. One on Billboard’s Top Country Albums. The impressive feat marks the first time the duo has topped the album charts since 2009 while simultaneously earning the duo their 10th Billboard 200 Top 10 album, the most of any country duo or group in the chart’s history.  In 2019 the duo was inducted into the Country Music Hall of Fame in the “Modern Era Artist” category. In 2021 Brooks & Dunn undertook their first nationwide tour in ten years with their anticipated The REBOOT 2021 TOUR, as well as wrapped their hugely successful and the longest-running country residency in Las Vegas, “REBA, BROOKS & DUNN: Together in Vegas.”

Two-day passes, Platinum Experience, Gold Circle, camping and all the extras are available now at CountryThunder.com or by phone at 1-866-388-0007.