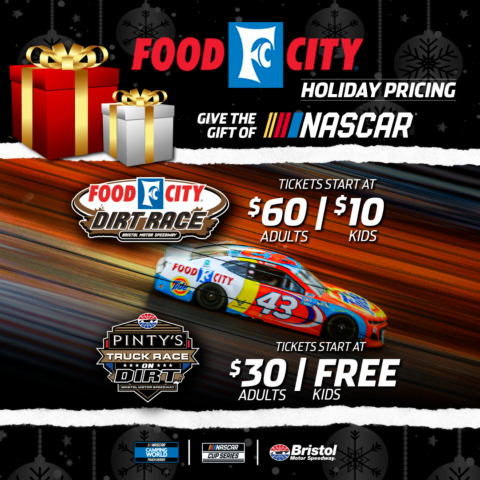 Looking for cool holiday gift ideas for that special race fan in your life? Look no further than your neighborhood Food City store, which will be offering specially-priced grandstand tickets for the Food City Dirt Race and Pinty’s Truck Race on Dirt starting today at all of their locations.

The Food City Dirt Race NASCAR Cup Series event, which will be held under the lights at Bristol Motor Speedway on Easter Sunday, April 17, will once again put the sport’s marquee series on Bristol’s clay-covered high banks in their only dirt race of the season. It will be the first time in history that the Cup Series will race on dirt at night.

All tickets purchased through Food City are blind-reserved seats selected by knowledgeable members of the BMS ticket office. The tickets will be sold at the customer service area of each Food City location. Tickets will be emailed to the customer within seven days of the purchase. The final day to purchase race tickets in-store will be Tuesday, April 12 for the Food City Dirt Race.

“Food City is an amazing community partner and we are so fortunate to have their support not only as the race entitlement partner, but also as one of our key ticket retailers,” said Jerry Caldwell, executive vice president and general manager, Bristol Motor Speedway. “Steve Smith and the entire Food City team have meant so much to us over the years as our longest serving Speedway partner and we are thrilled that our fans have the ability to purchase their Food City Dirt Race tickets in this easy, convenient manner.”

“Food City is proud to be Bristol Motor Speedway’s longest running sponsor.  We’re excited to partner with the speedway to offer our loyal customers great low prices on tickets to one of NASCAR’s premier venues,” says Steven C. Smith, Food City president and chief executive officer.  “We invite you to stop by one of our convenient locations to take advantage of these great savings!”

Fans witnessed history last March as the NASCAR Cup Series returned to its roots by racing on the dirt at the transformed Bristol Motor Speedway. It was the first dirt race for the Cup Series since 1970. The Cup stars will battle on the dirt once again this year and for the first time ever, will compete on dirt under the lights at BMS as the green flag is scheduled to drop at 7 p.m. with live coverage on FOX and PRN Radio.

The NASCAR Camping World Truck Series will also race at night on Saturday, April 16, during the Pinty’s Truck Race on Dirt, which will air on FS1 and MRN Radio.

For more information, please drop by your neighborhood Food City store or visit us online at www.bristolmotorspeedway.com.