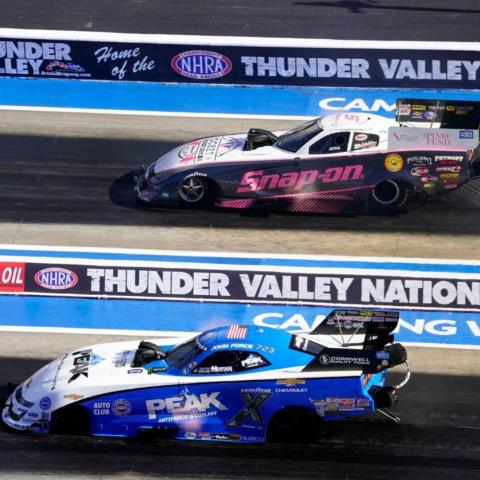 John Force (near lane) and Cruz Pedregon will be two of the Funny Car favorites at the NHRA Thunder Valley Nationals on Father's Day weekend at historic Bristol Dragway. The event will kick-off with nitro qualifying under the lights on Friday, June 17, to set the brackets for Sunday's final eliminations in the NHRA Camping World Drag Racing Series event. 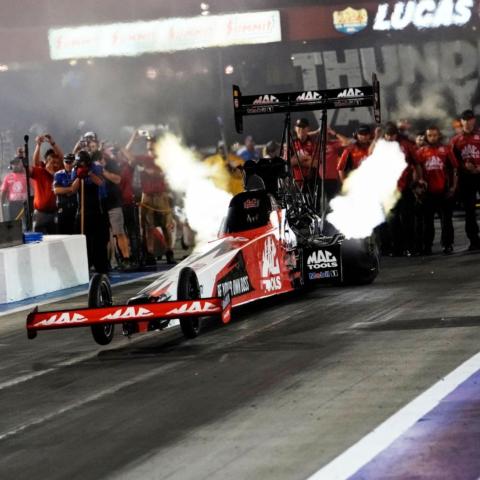 Three-time NHRA Thunder Valley Nationals Top Fuel winner Doug Kalitta blasts off the starting line in his Mac Tools dragster and will be one to watch at Bristol Dragway during the NHRA Camping World Drag Racing Series event on Father's Day weekend. June 17-19. The fan-favorite event will once again showcase qualifying under the lights during Friday's pro session.

For the first time in three years, Friday night qualifying will return to the NHRA Thunder Valley Nationals, where tall header flames shine brightly from sparkling race cars under the glow of stadium lights as countless flashes from fans' cameras flicker throughout the grandstands to create the surreal moment. It literally produces a can’t miss spectacle that you can only witness at an NHRA Camping World Drag Racing Series event.

When the lights come on at revered Bristol Dragway to kick-off the Father’s Day weekend event (June 17-19), the combination of speed, sparks, fire and thunder produced from the biggest, baddest 11,000-horsepower NHRA Top Fuel dragsters and Funny Cars on the planet will surely send fans into a frenzy.

Hot-rodding enthusiasts literally can't wait for the sun to go down and the excitement to rev up when their NHRA heroes race down the legendary track at incredible speeds to kick off the first round of qualifying on Friday night at 8 p.m. ET.

"When we race there at night time it's incredible," said Matco Tools dragster driver and three-time NHRA Top Fuel champ Antron Brown. "When the sun goes down over the outer edge of the mountains and it gets dark we light those candles up on the Top Fuel dragsters and Funny Cars and I tell you what, we come through there hard and fast and send a roar of energy throughout all of Bristol."

For even the most seasoned motorsports fan, the thrill of witnessing a pair of nitro-fueled machines powering to the finish line under the cover of darkness can be life-changing.

NHRA Funny Car icon John Force, a 16-time world champion who has claimed four of his NHRA-record 155 victories at Bristol, says qualifying under the lights is a throwback to the sport’s early days and energizes the fans like nothing else.

"The nighttime there is beautiful, the way Bruton (Smith, SMI chairman) built that track with mountains and trees on both sides," the 73-year-old Force said. "For the fans, it's the best."

To purchase your reserved seats, call the Bristol Dragway ticket sales center at 866-415-4158. Tickets also are available for purchase online at www.bristoldragway.com.