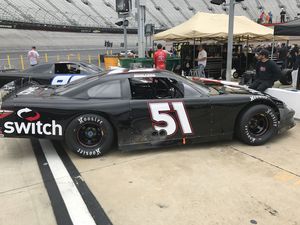 Excitement was high when Bristol Motor Speedway announced the Short Track U.S. Nationals and now that the weekend is here, competitors are ready to race around the high banks of The Last Great Colosseum.

Two open test days were held for racers to get a feel for the iconic half-mile oval. Drivers from six different classes tested everything, from qualifying and race trim to tire combinations. With nearly 500 race cars on-site, there will be plenty of action throughout this weekend, May 19-21.

A few names will stand out to NASCAR fans including Bubba Wallace and Noah Gragson.

Wallace currently drives the No. 6 machine in the NASCAR XFINITY Series for Roush Fenway Racing. The half-mile high banks have become a home track for the driver whose mom was a competitive athlete at the University of Tennessee.

While he has experienced BMS in quite a few different race cars, Wallace is experiencing something new this weekend: a Super Late Model. Wallace had chatted with his friend Jamie Yelton about running a Late Model Stock in this event. But to his surprise, he found out he would be racing a Super Late Model instead. To Wallace, Bristol was the perfect place for that first race.

"I definitely couldn't pass up this opportunity," said Wallace, who will pilot the No. 6 SLM for FatHead Racing. “Bristol has always been good to us. I get to have a little redemption for the XFINITY race (from April), so it’s good to relive what it’s like in late model.”

Wallace posted a 14.818 second lap at 121.474 mph and made the top 10 during each session of practice. The third-year NXS regular was most impressed at the speed of the Super Late Model around The World’s Fastest Half-Mile. His fastest lap beat out the XFINITY Series record of 15.093 seconds, which was set in 2004.

“The speeds are outrageous,” said Wallace. “The grip level is insane. You are driving them in three or four car-lengths deeper and then getting back on the gas five or six car lengths earlier. I’ve just got to man up and lay it all out there.”

Another NASCAR national series driver who will be competing in the Short Track U.S. Nationals is Gragson. A member of the 2016-17 NASCAR Next class, Gragson currently pilots the No. 18 truck for Kyle Busch Motorsports in the NASCAR Camping World Truck Series. He’s confident that his No. 51 KBM SLM will be primed to take home the checkered flag.

“Everybody with Kyle Busch Motorsports has worked really hard,” said Gragson, who will make his NCWTS Bristol debut at the UNOH 200 on August 16. “We came here a few weeks ago and tested. I thought it went pretty well. It’s definitely a lot of fun to go around Bristol, this place is really fast.”

Gragson noted that team owner and 2015 Monster Energy NASCAR Cup Series champion Kyle Busch has given him many pieces of advice about racing, both in the truck and specifically at Bristol. But he laughed when he mentioned the speeds of these cars compared to what his mentor was running at the Food City 500.

“I was looking at the times from practice at the Food City 500 here last month and Kyle had the fastest time with a 14.985,” said Gragson. “Right now they (SLMs) are turning 14.65 second lap times. They are three or four tenths faster than the last practice of the Cup race.”

With the high speeds, Gragson knows he will have to be focused. He mentioned that there is no racetrack like Bristol and that adds to the challenge of the weekend.

“It feels like you are in a flying saucer around this place,” said the NCWTS rookie. “You are going so fast. Your eyes can barely keep up with how fast you are going and looking at the track. This place is so cool and fast. It’s such a blast to drive here.”

The 2017-18 NASCAR Next class was announced earlier this week and one name from the list will be racing at the Short Track U.S. Nationals. Chase Purdy, a native of Meridian, Miss., will pilot the No. 97 SLM during the inaugural event. The 17-year-old competed earlier this year at Bristol during the Zombie Auto 125 NASCAR K&N Series-East and recorded a top-12 finish.

“It's definitely the fastest place I've ever been to in a Super Late Model,” said Purdy, who finished second and 11th at his last race, the NASCAR K&N Series twins at South Boston Speedway in Virginia. “When you go off into the corner, the forces put on your body feel like they are pushing you through the seat. That is something very new for me in a super and something I've never really felt. I feel like you can move around a little bit more with these cars, despite the speed, so when you slide into the corner with all those forces on you, it gets a little bit sketchy. It's cool though and I love it.”

Abingdon, Va. resident Danny O’Quinn has experience racing at BMS, but hasn’t been on-track at the Northeast Tennessee facility since 2010. The driver of the No. 96 machine will be piloting a Late Model Stock during the Short Track U.S. Nationals and he’s hoping to etch his name in the record books.

“It’s always fun to be a part of something for the first time,” said O’Quinn, whose last Bristol start came in the XFINITY (then Nationwide) Series. “Certainly it would be nice to put our name on that first trophy. That would be really special. But there’s a whole field here trying to do the same thing. Everybody’s going to have to work hard and give it our all.”

Tickets and pit passes for the Short Track U.S. Nationals start at $85 for a weekend grandstand seat/pit pass combo and $45 for a Saturday/Sunday grandstand GA combo. Kids 12-and-under are just $10 for a Saturday/Sunday grandstand GA combo. Individual pit passes also are available for ages 14-and-up. Visit http://www.bristolmotorspeedway.com/tickets/us-short-track-nationals/ for more information on ticketing for the race. For a VIP race experience, check out The Ole Smoky Roof, Bristol Club and the APEX Infield Lounge presented by Mahle Motorsports. For more information on these VIP experiences, call the Bristol ticket office at 423-BRISTOL.

For those who can’t attend, Bristol Motor Speedway and Speed51.com are partnering to offer customers a webcast pay-per-view experience of the Short Track U.S. Nationals. The early bird weekend combo price of $44.99 is available until Friday, May 19. The PPV also will be available for $24.99 on Saturday and $29.99 on Sunday of race weekend. To purchase the PPV package, please visit: http://speed51.com/bristol.