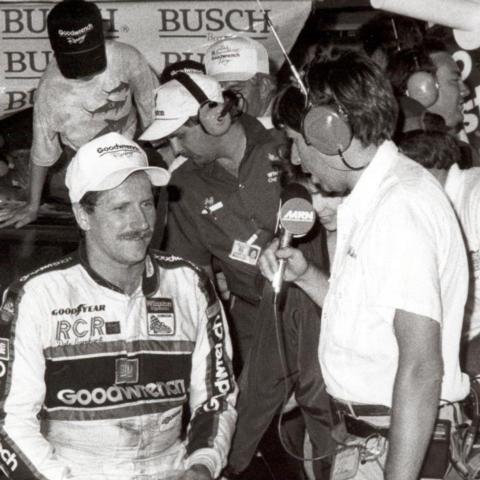 The very first time Dale Earnhardt rolled into Bristol Motor Speedway as a NASCAR Cup Series driver, it’s like there was an instant connection and he firmly planted his flag.

And for his legion of fans who flocked to support him at Thunder Valley during the 22 seasons he raced there, through all the wins, all the laps led, all the thrilling finishes he produced and controversial bump-and-run moments at The World’s Fastest Half-Mile, there was quite simply only one way to describe the iconic high-banked short track nestled in the hills of Northeast Tennessee: This is Earnhardt Country.

Even today, his legacy shines brightly as fans remember some of his highlight reel moments and amazing victories at Bristol Motor Speedway. Fans continue to wear his signature No. 3 gear from the ’80s – both the sizzling blue and yellow of Wrangler Jeans and the daunting silver and black of GM Goodwrench – with pride around the racetrack paying tribute to the greatness Earnhardt always seemed to summon when racing at Bristol.

“Bristol was the Dale Earnhardt track,” said noted motorsports author and historian David McGee. “Dale had success at other tracks, like Daytona, Talladega and Charlotte, but I think Bristol fit Dale Earnhardt about as well as anybody ever could because of his aggressive driving style and his take no prisoners attitude. The fans loved him; If you looked out across the grandstands you saw his colors. Because that was the official color of the Dale Earnhardt fan. They had on a t-shirt, a hat or a jacket with a big number 3 on it.”

In 43 career starts at BMS, Earnhardt collected nine victories, 20 top-fives and 30 top-10s. He led 3,751 laps of the 20,038 laps he completed there. Simply put, if there was a Cup race going on at Bristol, one way or the other, Earnhardt was always in the conversation.

Earnhardt’s two biggest Bristol moments happened 20 years apart, his ’79 win as a Cup Rookie and his ’99 bump-and-run thriller. But it was really during the middle of those two iconic victories – the 1980s – when Earnhardt established himself as a force to be reckoned with on the NASCAR scene with his prowess at Bristol Motor Speedway.

During that decade Earnhardt won six races at The Last Great Colosseum, including two-race sweeps in 1985 and 1987 and wins in 1980 and 1988. It was during the 1980s that ‘The Intimidator’ was born and much of that legacy comes from him utilizing his front bumper as his greatest weapon to navigate short tracks, especially at Bristol.

“As a driver, the last thing you wanted to see was that 3 car in your rearview mirror coming up from behind,” McGee said. “You knew if he was charging to the front and you were in his way, that no matter what you did you weren’t going to stop him. Earnhardt moved a lot of cars out of his way at Bristol over the years and the fans here loved every minute of it.”

His Bristol victories in the back half of the ’80s were thrilling. Each one of them featured an all-star driver playing the role of runner-up. In 1985 he held off Ricky Rudd and Tim Richmond, two of his biggest rivals at the time, for Bristol checkered flags. In his 1987 sweep, Earnhardt’s Bristol wins came against his longtime rivals Richard Petty and Rusty Wallace. In 1988, Earnhardt beat eventual season champ Bill Elliott at Bristol in the Busch 500, the ancestor of today’s Bass Pro Shops NRA Night Race.

“When you came to Bristol you knew you had to beat the 3 car,” McGee said. “In the 1980s there was no question about it.  If you were going to win you had to have the 3 car behind you. He was so resilient; if he had a bad day he would still come back and beat you. Had it not been for some mechanical issues he’d probably have more wins here at Bristol than he does.”

Some of his driving feats at Bristol were legendary, like his admission following the 1985 win over Rudd that his car’s power steering failed after about 100 laps into the race. Despite the ill-handling car, he managed to finish a car length in front of Rudd to take the win that day.

“I've never driven a car that had lost the power steering and I hope I never have to again," Earnhardt told reporters after the race. "I had to pull on the steering wheel so much my right arm felt like it went to sleep for the last 100 laps… It was the longest 400 laps I’ve ever run."

And Earnhardt’s success at Bristol during the 1980s helped pave the way to grow NASCAR Nation, as more fans were tuned into the sport via ESPN’s coverage on cable television. They couldn’t wait to see what the Intimidator was going to do next. And they loved watching the action at Bristol so much on TV, that they just had to go there and see the place in person.

In his ’85 clash with Richmond, Earnhardt used the bump-and-run to get past the flamboyant driver of the No. 27 car with 18 laps to go in the race. Earnhardt, who was blocked by the talented Richmond during several of his passing attempts, called his move on lap 482 to take the lead, “good, close hard racing.” Richmond wasn’t amused and called Earnhardt’s effort his “typical tactics.” That Night Race just happened to be the first prime-time telecast of a NASCAR race in history, a landmark moment for the sport which was magnified further by the epic Earnhardt-Richmond battle on track.

“There are some who would say that in the late '80s, Bristol’s success and the rise of Bristol is parallel to the rise of NASCAR,” McGee explained. “I would argue that Bristol in the 1980s actually lit the fire that started NASCAR’s rise and led to NASCAR’s major success in the 1990s and 2000s.”

And in the 1990s, two of the most talked about Earnhardt moments in the history of NASCAR happened at Bristol during America’s Night Race, and both involved Terry Labonte. In 1995, Earnhardt was trailing Labonte on the final lap and bumped his No. 5 Chevy as the two came out of turn four. Labonte managed to control his car’s slide and crossed the finish line sideways to take the dramatic victory. In 1999, Labonte wasn’t as fortunate. Earnhardt bumped Labonte in turn two on the final lap this time around, and quickly moved past the Texas native’s spinning machine to take the checkered flag for his final win at Bristol.

In Victory Lane after the race, many fans let Earnhardt know they weren’t pleased with the outcome of the race after his controversial move. Earnhardt famously said in victory lane, “I didn’t mean to wreck him, I just meant to rattle his cage.”

Those very words to this day accurately define Earnhardt’s amazing legacy at Bristol.

Just like Dale Earnhardt did over many seasons, today’s crop of NASCAR Cup Series stars will be looking to create some wow moments of their own at Bristol Motor Speedway during round number three of the NASCAR Cup Playoffs on Saturday night, Sept. 19 during the 60th running of the Bass Pro Shops NRA Night Race.