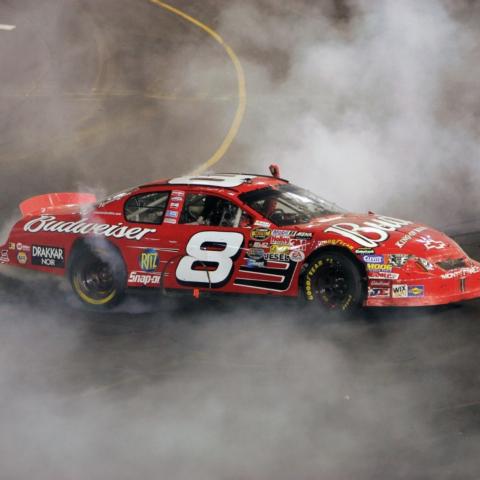 With apologies to Kurt Busch, who made Bristol Motor Speedway his personal playground in the 2000s with five wins from 2002 to 2006, the two biggest headlines to emerge from The World’s Fastest Half-Mile during that time period took place in 2001 and 2004, when two of the sport’s titans grabbed their only Bristol wins in dramatic fashion.

A pair of NASCAR Hall of Famers – Tony Stewart and Dale Earnhardt Jr. – both checked the iconic Northeast Tennessee short track off of their racing bucket lists during that decade and the wins were compelling and memorable. Both of those victories took place during the Sharpie 500, the ancestor to today’s Bass Pro Shops NRA Night Race.

The enormity of those two victories is why the Bass Pro Shops NRA Night Race became one of the hottest tickets in the Cup Series and it remains one of NASCAR’s majors, a race that every fan wants to experience at least once in their lifetime.

In 2001, Stewart was finally able to add the iconic Bristol trophy to his diverse personal collection. He passed rival Jeff Gordon with 69 laps to go and led the rest of the way in his orange No. 20 Joe Gibbs Racing machine. In the late stages of the race, Kevin Harvick was closing in fast on Stewart, but eventually he ran out of laps and the Indiana Hoosier took home a victory that he had long coveted.

“I've wanted to win a race here all my life, this is my favorite race track,” Stewart told reporters after the race. “It's just awesome to win at Bristol. It's so hard to win here. So many things happen and there are so many things that can go wrong.”

Stewart says part of the puzzle to win a race at Bristol is constantly being on high-alert and strategically navigating the track’s high-banked corners which allow the Cup Series cars to top 130 mph on a .533-mile oval. It truly is a short track that thinks it’s a superspeedway, and unlike any other test of racing on the schedule.

“Everything happens so fast,” Stewart says. “At the end of the day when the race is done and your adrenaline wears off, you're worn out. But when you're in the car and the adrenaline's pumping, you don't get in that smooth, calm rhythm that you do at a place like Michigan or California where you've got big, sweeping corners and long straightaways. There's just no time to relax. You don't get that luxury at Bristol.”

“Bristol is a track that's feast or famine,” Stewart says. “If you have a really good day, it's a lot of fun. But if you have one little problem, it normally makes for a very long day. We've had more long days than good days.”

Stewart, along with Earnhardt Jr., are two of the 21 Cup drivers in BMS history who own only one trophy from the challenging track. Winning at Bristol can be a very difficult task, as Earnhardt Jr. found out during his career.

His famous father, Dale Earnhardt Sr., won Bristol nine times overall and dominated at the track during the 1980s, winning six times. Much like Stewart, Earnhardt Jr. had a love affair with Bristol from a young age, but found success there much more difficult to come by than his father did. Other than his triumph in 2004, Earnhardt Jr. posted eight top-fives and 16 top-10s in 35 career starts at Bristol.

After winning the Night Race in August 2004, and becoming the first driver in Bristol history to sweep a weekend by winning the Xfinity and Cup races in consecutive nights, Earnhardt Jr. reflected on what it means to win a race at the track that he most recently called “The Dale Earnhardt of Race Tracks.”

“I came to a lot of races here when my dad drove them,” Earnhardt Jr. told reporters after his 2004 victory. “He made this place magical if you're an Earnhardt fan, and me being one of 'em. I might not have done it like he did it just now, but that was pretty damn close. He had some great races here. That's why this place is so magical to me. I've wanted to win here so bad. I never thought I'd win a Busch race and a Cup race the same weekend at Bristol. Good Lord. What a great day.”

Of course, following the win in Victory Lane, Earnhardt Jr. made more history during his interview with television reporter Bill Weber. After leading 295 laps of the race, including the final 85 laps, and climbing out of his No. 8 Chevy, Earnhardt Jr. let out a magical roar that lives on to this day. When Weber asked him why the win was so special, Earnhardt yelled, “It’s Bristol, baby!”

Earnhardt Jr. finished four seconds in front of second place Ryan Newman, who was followed across the finish line by Jimmie Johnson, Jeff Burton and Elliott Sadler in the top five. Kurt Busch finished 8th, Jeff Gordon was 14th and Stewart was 19th. The night before, Earnhardt Jr. led the final 71 laps of the Xfinity Series race to finish in front of an all-star lineup that included Matt Kenseth, Kyle Busch and Kevin Harvick.

“To win at Bristol, let alone sweep races at Bristol, it's awesome,” said Earnhardt Jr., who will be officially inducted into the NASCAR Hall of Fame early next year as part of the 2021 class. “With about 100 laps to go I was thinking about how bad I hated this track, but now that we've won, I love it. It's a love-hate relationship, because it just wears you out. That was probably the most physically draining experience I've had in a race car. That long green-flag run, man, it was something else.”

His emotion-filled phrase, “It’s Bristol, baby!” continues to live on among fans as a mantra for the track and although he doesn’t have as many wins as his father at Bristol, the one night he shined was special indeed.

“Five years to the day after his father scored his final Bristol Motor Speedway victory, Dale Earnhardt Jr. took a wildly popular win in the Sharpie 500,” said noted motorsports historian and author David McGee. “Despite starting 30th, Earnhardt roared through the field to take the lead on lap 64. He led six times for 295 laps. He won by almost five seconds over second-place Ryan Newman. With that win, Dale Jr. became the first driver to ever sweep both a Busch and Cup Series race at Bristol on the same weekend. A feat even his famous father never accomplished.”

Just like Stewart and Dale Jr.’s incredible victories at Bristol, today’s crop of NASCAR Cup Series stars will be looking to create some wow moments of their own at Bristol Motor Speedway during round number three of the NASCAR Cup Playoffs on Saturday night, Sept. 19 during the 60th running of the Bass Pro Shops NRA Night Race.