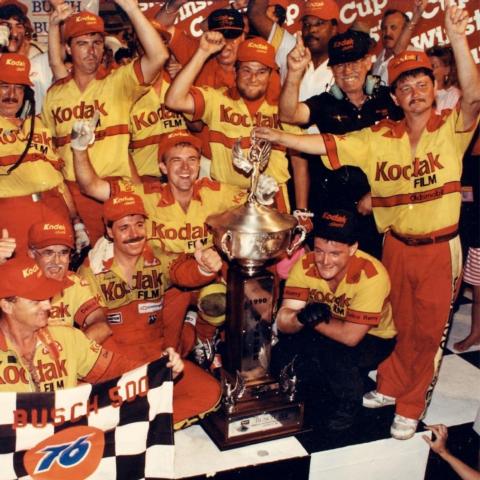 In life, there are times when all of the stars get into perfect alignment, allowing for a magical moment to develop that transcends space and time.

Such a moment happened at Bristol Motor Speedway on August 25, 1990.

Just when it appeared that Dale Earnhardt was running away with another Bristol Motor Speedway victory under the lights on a warm late summer night in Northeast Tennessee, the earth seemed to shift and for a brief moment a parallel universe opened slightly.

After dominating the race by leading 350 laps of the Busch 500, the ancestor to today’s Bass Pro Shops NRA Night Race, Earnhardt made contact with old rival Ricky Rudd on lap 415, which led to a cut tire on the black and silver No. 3 car. With 83 laps to go in the race, Earnhardt had to pit and an emerging California driver at the controls of the local team’s yellow No. 4 car took advantage of the situation.

Ernie Irvan, from Salinas, Calif., mashed the gas on his Abingdon, Virginia-based Morgan-McClure Chevy and pulled into the lead. He managed to hold off a determined Rusty Wallace over the final 90 laps and take his very first NASCAR Cup Series checkered flag. The popular result sent chills throughout the garage area, 20 miles up the road to the nearby town of Abingdon, and all the way back into the massive BMS grandstands.

The hometown team had finally won its first race, at its home track, and the West Coast rookie driver with so much potential showed he had what it takes during crunch time by holding off a legend like Wallace, a multi-time Bristol winner.

“I knew we would get that first win, but I never dreamed that it would happen here,” Irvan told reporters after the race. “This is really special for the team.”

Team owner Larry McClure had to pinch himself, to make sure he wasn’t dreaming.

“I’ll never forget that race,” McClure told the Bristol Herald-Courier in 2016. “I don’t think we got to bed until around 4 that morning. We actually signed our first multi-year contract with Kodak the night before that race.”

Irvan held off the hard-charging Wallace by .21 of a second at the finish line to get the win. Mark Martin and Terry Labonte finished third and fourth, respectively, while Earnhardt, who seemingly had the race under control in the early goings, ultimately finished eighth.

“I hate something happened to Dale,” Irvan said. “I wish he could have been there at the end. But I’m glad we got there first.”

Irvan said the final 90 laps were a blur. He was just in full race car driver mode, making sure he kept his car out of trouble and out in front.

“Ernie had to hold off Rusty Wallace over the final 40 or so laps, which is nearly impossible at Bristol,” said noted motorsports historian and author David McGee. “Rusty made several runs at him, but raced him really clean and never touched him.”

Wallace was determined, but Irvan wasn’t going to give up easily.

“To tell you the truth, I didn’t see the checkered flag,” Irvan told reporters. “I was so busy trying to stay ahead of Rusty I didn’t even have time to look up.”

With the victory, Irvan joined an impressive list of Cup drivers who earned their first Series win at Bristol, including Earnhardt, Wallace, Kurt Busch and Elliott Sadler.

“That was a very emotional night,” McGee said. “Ernie and Morgan-McClure were a win looking for a place to happen. They'd run really well that whole season and a lot of fans in this area were pulling for them. Ernie was really good at Bristol. He surprised a lot of people leading laps here in 1989 in D.K. UIrich's car and again in the spring of 1990 after winning the pole in only his third start in the 4 car.”

McClure said the addition of Irvan just completed their race team puzzle. It was a perfect fit. The team went on to win the Daytona 500 in dramatic fashion the following February.

“We were a one-car team and part of the time we were under-budget, but we had good people,” McClure told the Herald-Courier. “At that time in the sport, you didn’t have to have all the money. If you had good people, you could be more innovative, work hard and have success.

“In his time, Tony Glover was as good of a crew chief as there was in the sport. We had basic setups and good race cars. When you add in a good driver, that makes for success.”

Just like Irvan’s magical first career victory at Bristol, today’s crop of NASCAR Cup Series stars will be looking to create some wow moments of their own at Bristol Motor Speedway during round number three of the NASCAR Cup Playoffs on Saturday night, Sept. 19 during the 60th running of the Bass Pro Shops NRA Night Race.

On Thursday night, Sept. 17, the NASCAR Gander RV & Outdoors Truck Series will open its eight-race Playoff series during the UNOH 200 presented by Ohio Logistics at 7:30 p.m. The 10 driver Playoff field – which will likely include top series drivers such as Matt Crafton, Ben Rhodes, Grant Enfinger, Brett Moffit and Austin Hill.