History of the Bass Pro Shops NRA Night Race: The King Richard Petty was model of consistency at Bristol Motor Speedway in the 1970s 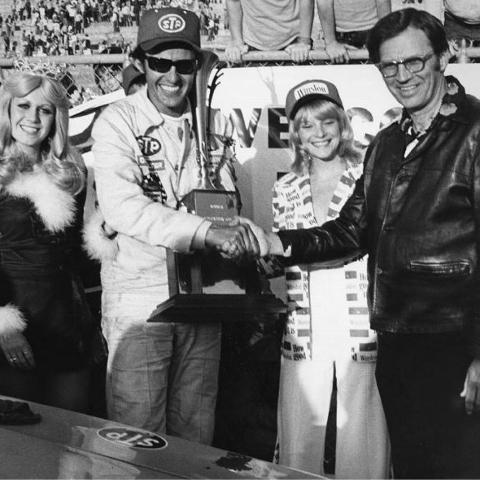 There’s a reason why they call him The King.

When fans see the tall feather-wrapped cowboy hat, dark shades, huge shiny belt buckle, straight-legged blue jeans and snakeskin durango boots approaching with that signature stride, they immediately realize they are in the presence of the most esteemed NASCAR Royalty. Richard Petty has always had that swagger, but it wasn’t so big that he failed to make a connection with NASCAR Nation. He signed every autograph. Every. Single. One.

Much like the late Arnold Palmer in the world of professional golf, Petty has earned his perch upon NASCAR’s highest throne by always going the extra mile to elevate his sport and by putting the fans first. At 83 and still getting things done, he continues to keep the fans first and be a bigger than life presence in the Cup garage as a team owner for his iconic No. 43 team.

He has seven championship rings, a collection of flashy studded jewels that would make even Avengers super villain Thanos envious.

His records amassed during his long run as a top driver in the NASCAR Cup Series that spanned parts of four decades are plentiful. Most notably, his 200 career Cup victories, will likely never be touched. By the way, that’s a lot of trophies.

In the NASCAR archives book you will see his name attached to many other records.  Some of them, like the two important marks that he holds at Bristol Motor Speedway, reveal a driver who was dedicated to his craft with precision and consistency.

If one were to ask the King what his relationship was like with Bristol Motor Speedway during his swashbuckling driving days, he or she would likely get a roll of the eyes, followed by a quick snarl. But at the end of the day, he would flash his patented grin.

Yes, it was complicated.

However, for those stat geeks who dive into the layers of relevance beyond just the number of victories – Petty only earned three of his 200 wins at BMS – there is plenty of substance to be discovered with the King and the World’s Fastest Half-Mile.

“Of all the short tracks Richard Petty conquered during his Hall of Fame career, none provoked the love-hate relationship of Bristol,” said noted racing historian and author David McGee. “He typically ran really well here but victories were elusive. In the 1960s, he had two wins within his grasp but wound up losing the lead in the final laps – once with a blown engine with three laps to go and a two-lap lead over second place.

“Richard nearly got another victory here in the 1979 Night Race during his final championship season. He won the pole and was running in the top five when leader Benny Parsons spun to bring out a late caution. Darrell Waltrip got the lead then held off Petty for the victory.”

Petty had his best year at Bristol in 1975, where he swept both of the track’s two Cup races. His record-setting win at the Volunteer 500, the early ancestor to today’s Bass Pro Shops NRA Night Race, was a race that had enough pop and significance to land the sport a nice 20-inch story in the following day’s sports section of the New York Times.

Petty’s win on that late November day not only was a sweep of races at Bristol that year, a feat in itself that is incredibly tough to do, but it was a record 13th win of the season and an effort that locked up his sixth NASCAR season championship title, also a record at the time. The win also vaulted his season winnings to more than $300,000, a milestone earnings figure that was literally unheard of in stock car racing during that time period.

Petty won the race with a quick pit crew and some good fortune. Two of his main challengers, Cale Yarborough and Darrell Waltrip, had issues that took them out of the conversation. Petty took the lead for good when his pit crew got his car out in front of eventual second-place finisher Lennie Pond in the closing laps.

“My car really wasn’t handling that great,” Petty told the media after the race.  “When Cale had trouble and Darrell had trouble that made it easy. But my pit crew beat Lennie’s and that’s what counted.”

Petty’s stellar 1975 season at Bristol – he also won the spring race that season with a six-lap lead over second place Benny Parsons – will always headline his list of major accomplishments at the high-banked half-mile oval, but his team’s effort at the track during that decade despite a lack of victory lane visits to show for it could arguably be called one of the most consistent and efficient for any driver during any 10-year stretch at Bristol.

In the 1970s, Petty posted an incredible 14 top-five finishes in 20 starts at BMS, and most of those were second and third place efforts. One thing Thunder Valley fans could count on during that decade when they attended a race at Bristol was seeing Petty’s familiar baby blue No. 43 running up front.

At the end of his career, Petty’s longevity in the sport and his tenacity and determination at Bristol, put him atop several track records that stand to this day. His 60 starts at BMS, which produced a remarkable 23,815 laps completed, also is a record that looms large.

In those 60 starts, he finished in the top-10 an incredible 37 times and in the top-five 26 times, both longstanding BMS records.

While he may not have grabbed a bunch of trophies at Bristol during his driving days, he did show everyone that he had the talent, skill and prowess to conquer Bristol’s unique layout by constantly being in contention to win, having minimal mechanical issues, staying out of trouble and finishing the races he started.

He says all the records he earned during his driving days, especially the ones that have stood the test of time and continue to be relevant nearly 20 years after he hung up his helmet, are special to him, but that trying to compare each generation of drivers in different eras is a fruitless endeavor.

"You set a record and stuff and can say, 'You hope nobody ever gets to it,'" Petty has said. "You did it under your circumstances. When somebody else does it, they do it under different circumstances. There's no way to compare what I've done or what Dale Earnhardt did or what Jimmie Johnson has done against each other."

As a team owner, Petty continues to be a major presence in the pits at Bristol Motor Speedway and across the NASCAR landscape, cheering on and mentoring his current driver, Bubba Wallace.

Wallace and many more of today’s NASCAR Cup Series stars will be looking to create some wow moments of their own at BMS during round number three of the NASCAR Cup Playoffs on Saturday night, Sept. 19 during the 60th running of the Bass Pro Shops NRA Night Race.

NASCAR’s best drivers will beat and bang on each other – NASCAR Playoff style – and only the strongest will survive 500 laps of mayhem and chaos inside the high-banked, all concrete bullring. In the Cup race, you’ll get to see all of your favorite drivers doing what they do best, including reigning Cup Series champ Kyle Busch, defending event winner Denny Hamlin, Food City Supermarket Heroes 500 winner Brad Keselowski, All-Star Race winner Chase Elliott, two-time BMS winner Kevin Harvick, Ryan Blaney, Martin Truex Jr., Austin Dillon and Bristol fan-favorite Matt DiBenedetto, among others.

Many of short track racing’s rising stars, like Hailie Deegan, Ty Gibbs, Michael Self, Bret Holmes and Drew Dollar, will hit the track on Thursday night after the Truck Series race for the Bush’s Beans 200 in the ARCA Menards Series. Race officials announced recently that this race, which is scheduled as the 9:30 p.m. nightcap on Thursday, will be increased by 50 laps to a 107-mile distance.