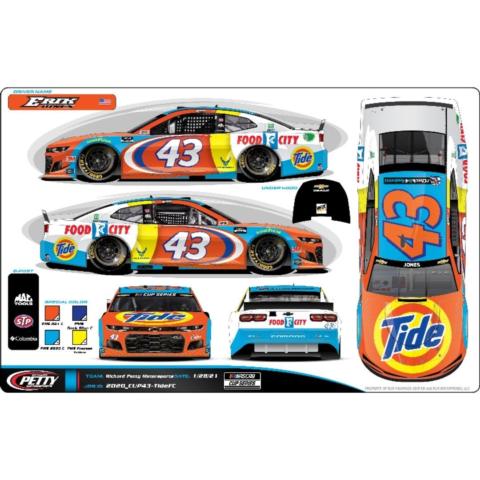 In anticipation of the first time in more than 50 years the NASCAR Cup Series (NCS) schedule will include a dirt race, Richard Petty Motorsports (RPM) announced today a partnership with Food City and Tide at a press conference at the Bristol (Tenn.) Motor Speedway. As part of the agreement, the No. 43 Chevrolet Camaro ZL1 will carry the Tide brand as the primary partner in the NASCAR Cup Series Food City Dirt Race at the Bristol Motor Speedway on Sunday, March 28 with driver Erik Jones.

As part of Bristol Motor Speedway’s 60th anniversary celebration in 2021, the half-mile, high-banked concrete oval will be transformed into a state-of-the-art dirt racing facility for the Food City Dirt Race. The event will mark the first time the NASCAR Cup Series will compete on dirt in the sport’s modern era.

“The Food City Dirt Race marks the first time that the NASCAR Cup Series has competed on dirt since 1970 at the State Fairgrounds in Raleigh, N.C., when Richard Petty took home the checkered flag,” Steven C. Smith, Food City president and chief executive officer, said. “How awesome is it that we have the opportunity to serve as the primary partner of the iconic Richard Petty Motorsports No. 43 Chevrolet Camaro for the running of this historic event at the Bristol Motor Speedway.”

This is the first time a dirt track has been put down for any race at The Last Great Colosseum in over 20 years, and it will likely be the most anticipated.

“We are so proud to have Food City and Tide to partner with Richard Petty Motorsports for the Food City Dirt Race,” Jones said. “Tide has such a rich history in this sport, and I am honored to continue the legacy as a driver behind-the-wheel of the No. 43 Tide Chevrolet Camaro ZL1.”

Tide’s unmistakable logo, the distinctive orange-and-yellow bulls-eye, is on the hood and will adorn Jones No. 43 Chevrolet Camaro ZL1 for the circuit’s return of dirt track racing. The paint scheme was inspired by Tide’s rich history in NASCAR, with its classic bright paint scheme. The addition of Petty Blue, one of the most iconic colors in NASCAR, is a fresh addition to the classic design that has adorned the hoods in the past with Darrell Waltrip, Ricky Rudd and Ricky Craven.

The 24-year-old Byron, Michigan, native has eight starts in the NASCAR Cup Series at the .533-mile track. Jones collected the pole award at the Bristol Motor Speedway in August 2017, and has posted four top-five finishes and four top-10 finishes, recording 293 laps led. In addition, Jones has notched two wins (2016, 2017), three top-five finishes, and four top-10 finishes in six career starts at Northeast Tennessee’s “The World’s Fastest Half-Mile” in the NASCAR Xfinity Series (NXS). He has one start (2015) in the NASCAR Camping World Truck Series (NCWTS) at Bristol Motor Speedway.

The Food City Dirt Race at the Bristol Motor Speedway will be broadcast live on FOX on Sunday, March 28 at 3:30 p.m. (ET). It will also broadcast live on the Performance Racing Network (PRN) and SiriusXM NASCAR Radio.

About Richard Petty Motorsports
A performance and marketing driven company, Richard Petty Motorsports (RPM), co-owned by NASCAR Hall of Famer Richard Petty and successful business entrepreneur Andrew Murstein, is one of the most recognized brands in all of motorsports. RPM is the winningest team in NASCAR Cup Series history with 273 wins and has business partnerships with national and global leaders. Today the race operation fields the famed No. 43 in the NASCAR Cup Series with driver Erik Jones. The team is headquartered in Welcome, N.C.