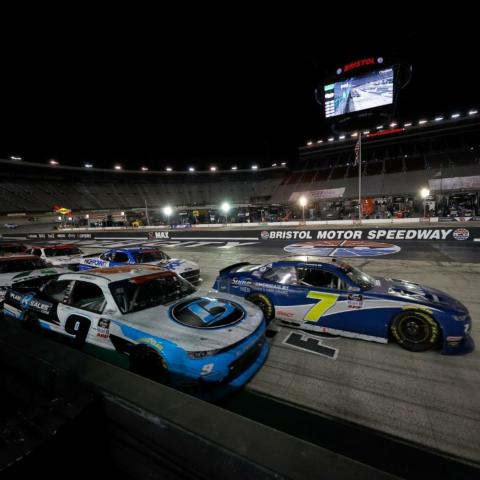 Baseball had Mr. October and now Justin Allgaier is giving everyone in the NASCAR Xfinity Series garage a good reason to start calling him Mr. September.

While New York Yankee Reggie Jackson earned his famed nickname with a powerful World Series performance against the LA Dodgers in 1977, Allgaier is getting hot at the right time at the wheel of his No. 7 Chevy for JR Motorsports as he pursues the 2020 NASCAR Xfinity Series championship crown.

The veteran driver scored impressive victories during the last two Xfinity Series races on consecutive nights at the tough Richmond Raceway in Virginia, giving his team a major boost after having a streak of terrible luck during much of the early season.

He says that winning races in back-to-back days is an incredible feat. Especially since his team had to stay up late to repair the nose of his car following Friday night’s Richmond victory.

“I don’t know that it isn’t the biggest accomplishment of my career,” Allgaier told reporters after Saturday afternoon’s win. “I think a lot of times in this sport you’re only as good as your last race. And it’s really, really easy to have success and have a good race and not following it up with another good race.”

Allgaier, who also won one of two Dover races held back-to-back in August, will need the same type of determination and luck on his side Friday night at Bristol if he’s to increase his regular season-ending winning streak to three. Allgaier has claimed one Bristol win and has eight top-fives and 11 top-10s in his career in 19 starts at The World’s Fastest Half-Mile.

“We’re executing well,” the Riverton, Ill.-native said. “Things have been going the way that we need them to go.”

It’s a far cry from the beginning of the season when it seemed like nothing could go right for Allgaier and his team. The last two races before Richmond were a huge reflection of his season. At the Daytona Road course he got clipped by A.J. Almendinger late in the race and finished 29th. At Darlington he finished 31st after right front tire issues plagued the team throughout the race.

One of his first run-ins with bad luck in 2020 took place at the Cheddar’s 300 at Bristol in June when he was involved in a late race crash with eventual winner Noah Gragson on lap 297. Allgiaer was seemingly on his way to victory after leading 156 laps of the race, but ultimately finished 18th. He was fuming mad after making contact with teammate Gragson coming out of turn one and ended up hitting the outside wall in turn two and then the inside wall down the backstretch.

“The team did a great job getting us track position we needed,” Allgaier said after the incident. “I’m more mad at myself for making a mistake and getting off the bottom, but yeah, we got wrecked.”

Gragson, who has won two races this season in his No. 9 Bass Pro Chevy for JR Motorsports, apologized to Allgaier after the race, but wasn’t apologetic for his aggressive driving style.

“I have a lot of respect for Justin and the No. 7 team,” Gragson said at the time. “All of us drivers are on the limits and I don’t know if it’s a mistake or whatnot, but it ended bad for him unfortunately, but still a tremendous amount of respect for him.

During the two races in Virginia, all of the stars finally aligned for Allgaier. It comes at the perfect time as the team prepares for its seven-race Playoff Series. Allgaier is already locked into the Playoff field so at Bristol he’s just looking to keep the positive mojo going. He enjoys having some things go right for a change.

“Being on the right end of the stick,” Allgaier said. “I have to thank the Man upstairs. (The second Richmond victory) was definitely a push to the end, but we just had the luck we needed. I say luck, but luck is opportunities and preparation. We were prepared and the opportunities came tonight and we did a good job. I’m really proud of these guys.”

Meanwhile, another driver who is locked into the Playoffs is Austin Cindric, who claimed the Xfinity Series regular season title at Richmond.

After posting five victories this season in his No. 22 Team Penske machine, he was disappointed in his effort at the Richmond doubleheader with a fourth and 10th place showing. He hopes to turn around his last Bristol effort, which was a 36th place finish in June under the lights, and end the regular season with a victory. Still, he’s proud of his title of regular season champ.

“We sat down as a team at the beginning of the year and we all wrote down our top-three goals," Cindric said. "I am not a big proponent of setting goals but we put something on paper and my number one was the regular-season championship. From the outside looking in that was maybe a lofty goal but we have a lot of speed and a lot of fight and I am really proud of that effort. We can’t have days like (Richmond), especially if we get to make it to the Championship Four. A lot of emotions right now but at the end of the day it is mission accomplished for sure.”

Other drivers to watch in the Food City 300 include six-time season winner Chase Briscoe, who has run well at Bristol in the past. Several other multi-time winners will be looking to improve their Playoff seed positions with a victory, including three-time season winner Brandon Jones and two-time season winners Harrison Burton and Justin Haley.

At the bottom of the Xfinity Series 12-driver Playoff field only one spot remains unclaimed, and it is currently being held by Brandon Brown, who is 49 points up on the 13th place driver, Jeremy Clements. A few weeks ago that margin was around 12 points but Brown has increased it in recent races and bumped it up even more with an 11th place finish at Richmond in Saturday afternoon’s race, while Clements finished 17th.

Basically to get in on points, Clements needs to win stage points and finish very high in the race, while having Brown finish near the bottom. Of course a win would do it for Clements as well. That remains the best-case-scenario for any of the drivers who are below the 13th spot looking to break into the Playoffs with a dramatic Bristol victory, including Myatt Snider, Alex Labbe, Josh Williams, Jesse Little and Knoxville-based driver Chad Finchum, to name a few.

The race weekend also will feature Playoff action in the NASCAR Cup Series and NASCAR Gander RV & Outdoors Truck Series while the ARCA Menards Series will feature the Bush’s Beans 200.

On Saturday night, the NASCAR Cup Series stars will be battling for Playoff survival during round number three of the NASCAR Cup Playoffs in the 60th running of the Bass Pro Shops NRA Night Race (7:30 p.m., NBCSN, PRN Radio, Sirius XM NASCAR Radio).

The race will begin with 16 of the best Cup Series drivers racing for championship glory and will finish with only 12 drivers remaining in pursuit of the 2020 season crown. As the first cut-off race in the NASCAR Cup Playoffs, four drivers will see their championship dreams end under the lights at The Last Great Colosseum.

Many of short track racing’s rising stars, like Hailie Deegan, Ty Gibbs, Bret Holmes, Sam Mayer and Drew Dollar, will hit the track on Thursday night after the Truck Series race for the Bush’s Beans 200 in the ARCA Menards Series. Race officials announced recently that this race, which is scheduled as the 9:30 p.m. (FS1) nightcap on Thursday, will be increased by 50 laps to a 107-mile distance.