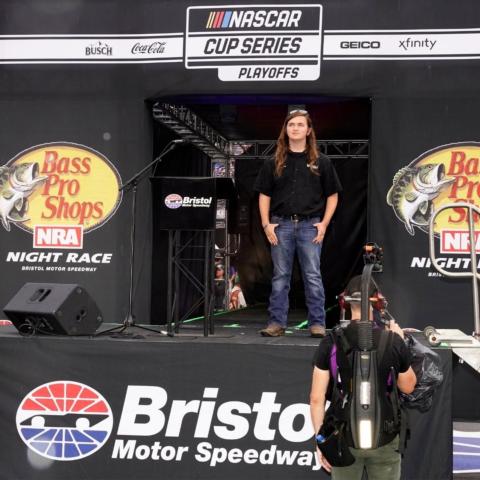 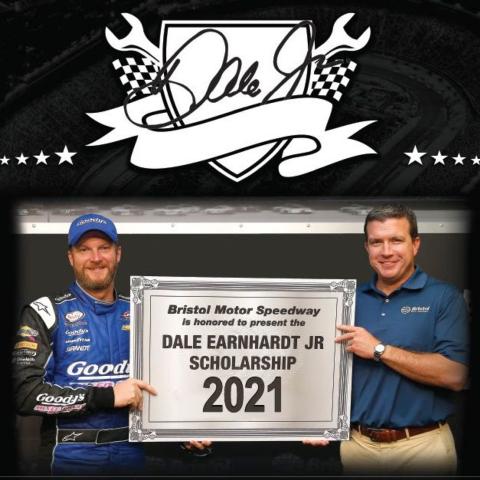 It seems only fitting that the family of the winner of the 2021 Dale Earnhardt Jr. Scholarship has a long and colorful history in motorsports.

Caleb James Cate, a freshman at the University of Northwestern Ohio (UNOH) is the winner of the $2,088 Dale Earnhardt Jr. scholarship, established by Bristol Motor Speedway in 2017 to honor the retired NASCAR Cup star. Cate was selected from more than 75 students from 11 different colleges and universities who applied for the scholarship this year.

Cate’s grandmother was a drag racer. So was his father. He, too is a drag racer, competing right up until the week before he left for school earlier this month.

“This is really a surprise. I’m definitely surprised I was able to get this,” the Knoxville native said when he was told of the scholarship. “It’s going to help me a lot. I’m trying to get all the scholarships I can get to help with school.

For the first time, Bristol Motor Speedway awarded two runner-up scholarships, each in the amount of $500. These were awarded to Benjamin Anton of Jefferson Hills, Pa. and Misgana Taye of Lima, Ohio. Both are also students at UNOH.

“We opened the Dale Jr. Scholarship up to college students this year and we had a great response with a record number of applicants,” said Jerry Caldwell, executive vice president and general manager, Bristol Motor Speedway. “In fact, we had three great final candidates, so for the first time we awarded two runner-up awards. Our winner, Caleb James Cate from Knoxville, is a freshman at UNOH and certainly has a genuine interest in the automotive field and racing and his application stood out from all the rest. We are happy that this money will be able to benefit him as he pursues a future in the industry. We wish him the best of luck.”

Like Earnhardt Jr., Cate was born into a racing family, albeit a family that raced in straight lines instead of circles.

Cate’s grandmother, Cathey Cate was the first in the family to drive a race car, winning races in her 1966 Chevelle over a couple of decades in the Knoxville area. His great uncle turned wrenches on Top Fuel Dragsters that competed against legends like Don Garlits and Tommy Ivo. His dad began drag racing when he was 16.

And when Cates turned eight in the summer of 2011, his racing career began in a Junior Dragster, and he’s been racing ever since. Along the way he inherited his grandmother’s ’66 Chevelle and raced that and in recent years has been running a 1985 Oldsmobile Cutlass in the Sportsman Division at Knoxville Dragway. He’s been competitive throughout his career, winning races in every division he’s run.

Cate is a student in UNOH’s High Performance Automotive Program and hopes to become a member of the school’s drag racing team.

Runner-up award winner Anton is also a racer, competing at a track near his home in Jefferson Hills, Pa. He is a member of UNOH’s dirt racing team and drove their Thunder Stock car this past summer. He also is enrolled in a High Performance Automotive Program and hopes to be a fabricator when he graduates.

Ironically, Anton originally signed up to attend UNOH during a race at Bristol Motor Speedway when the college was recruiting during a race weekend.

Taye is originally from Southwest Virginia and graduated from Mountain Mission School in Grundy, where he took automotive classes. He is pursuing an associate degree in Diesel Technology at UNOH and a bachelor’s degree in business.