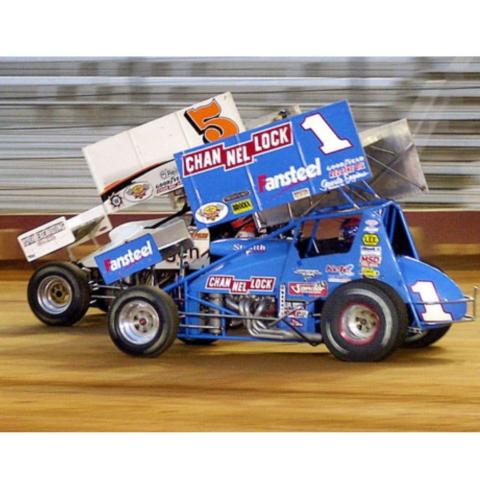 Sammy Swindell (1) took the checkered flag in World of Outlaws victories at BMS in 2000 and 2001.

Nearly two decades ago several Bristol Motor Speedway executives had a vision after a trip to visit their newest Speedway Motorsports sister track in Las Vegas. The group had just watched a World of Outlaws event at the LVMS Dirt Track and began pondering dirt racing possibilities at Thunder Valley. After discussing their concept with then BMS President Jeff Byrd, the idea quickly took flight.

It wasn’t long before major races with the World of Outlaws and Dirt Super Late Models were scheduled to take place at BMS during the 2000 season. It was official: the legendary all-concrete high banks at BMS would be covered in dirt for some special racing weekends.

Despite the naysayers, the project was a huge hit. After hauling in more than 14,000 truckloads of dirt, BMS hosted its first World of Outlaws event in 2000, and also brought in the dirt Super Late Models during another weekend. The fans ate it up and packed the stands. The events were such a success, BMS put the dirt down once more in 2001 for additional World of Outlaws and Super Late Model weekends. The fans flocked in once again.

As BMS celebrates its 60th anniversary in 2021, as a tip of the cap to those early dirt races, the iconic track will once again transform the all-concrete half-mile into a dirt racing facility and this time the track will make even more history as for the first time since 1970 the NASCAR Cup Series will return to its roots to compete on dirt during the Food City Dirt Race, March 28. The Camping World Truck Series also will be part of that race weekend with the Pinty’s Truck Race on Dirt on Saturday night, March 27.

While the dirt is down, BMS has scheduled several additional events. To kick off the run of dirt events, BMS will host the Bristol Dirt Nationals, March 15-20, which will feature eight classes of racing, more than 1,200 competitors and be headlined by the powerful dirt Super Late Models. On April 8-10, BMS will welcome the return of the World of Outlaws Series with their touring Super Late Models for the Bristol Bash. Finally, the thrilling World of Outlaws sprint cars will make their triumphant return to BMS on April 22-24 for the Bristol Throwdown.

To get in gear for all of the exciting Bristol dirt racing coming up, here’s a quick look back at the pioneering dirt racing that took place at The World’s Fastest Half-Mile in 2000 and 2001.

Sammy Swindell loves to go fast. That was never more evident than when the World of Outlaws sprint cars made their debut at Bristol Motor Speedway in 2000.

He started off with a new track qualifying record at 138.492 mph.

After heat races, he started fourth in the A-Main, but didn’t stay there long. The West Tennessee hotshoe made a spectacular pass in the middle of two other drivers on his way to the front. He passed perennial World of Outlaws champion Steve Kinser for the lead on lap 13 of the 30-lap feature and led the rest of the way.

Stevie Smith finished second in the race with Kinser third. Mark Kinser, who had beaten Swindell in a preliminary feature the night before, finished fourth. Dale Blaney, the uncle of current NASCAR Cup Series star Ryan Blaney, rounded out the top five.

Asked why he was able to beat all of the other top stars of the time, Swindell pointed to his heavy right foot.

“This place is awful fast,” Swindell said. “A lot of guys probably aren’t used to going this fast. If they built all tracks this fast, I’d probably win them all.”

Swindell repeated as the big Bristol winner in 2001 after a tremendous duel with pole-sitter Jeff Shepard.

Shepard stayed out front until a caution on lap 22. Swindell darted back ahead on a lap-23 restart and led the final seven laps with Shepard challenging to the end.

Swindell reflected on his Bristol wins during a 2020 interview.

“I’ve always enjoyed the faster places,” he said. “It’s just a whole different deal to do it on a track that size and that fast and run through the corners. The whole facility, it was just larger than life from what we normally do. For me, it was fun.”

The Super Late Models also made quite an impression the last time they were at Bristol. Dale McDowell of Rossville, Ga., won the 2000 race and Mooresburg driver Scott Bloomquist kept the winner’s trophy in East Tennessee in 2001.

“Oh man, it’s awesome,” McDowell said after winning. “There’s definitely prestige to win in front of this many people. I’m just proud to be a part of it.”

Still, the fast speeds around Bristol presented their challenges. Only half of the 30 cars which started the race were running at the finish.

Even McDowell had his worries. During a caution at the halfway point of the race for crews to re-fuel the cars and check the condition of tires, a cracked wheel was discovered on McDowell’s car.

“This place is awfully demanding. It’s fast and at lap 50, I thought it was 100,” McDowell said. “Just you enter (the turns) at such a great speed here. That last 10 laps, I felt all kinds of vibrations.”

Knoxville driver Freddy Smith started the race on the pole, but West Virginia racer Mike Balzano made a pass for the lead on the second lap. Balzano stayed out front until he blew a tire on lap 33.

It was McDowell’s race from that point on as he won by five car lengths over Wendell Wallace. Steve Shaver was third, while Bloomquist put on a show coming through the pack after starting at the back of the 24-car field.

He had been penalized for not taking enough practice laps prior to qualifying and heat races. The Hawkins County legend stormed up to 10th before the halfway point and was sixth when he cut a tire on his No. 18 machine.

He made another charge through the pack to finish seventh.

Bloomquist, now the winner of over 600 races, got his Bristol glory the next year when it became a three-day show with a pair of 30-lap features and a 60-lap feature as the main event.

Smith started on the pole for the first night of racing and led the first 29 laps of the race. Bloomquist went to the outside on the final lap and beat Smith by less than two feet at the finish line. McDowell finished third.

Bloomquist originally planned to pass Smith on the inside, but had to adjust his strategy when Smith tried to block him.

“When he took that low line, I just left it on the floor,” Bloomquist explained. “I went to the top with it and I got the run off the top. You could get a pretty good run off the top off the corners.”

The next night, Smith again took off early and led the first 15 laps of the race. Wisconsin driver Jimmy Mars overtook him for the top spot on lap 16 and led the rest of the way. Smith posted his second runner-up finish with another Wisconsin driver, Dan Schlieper, finishing third.

Bloomquist wasn’t a factor that night with a 21st-place finish.

But, he bounced the following night in a big way. Bloomquist started on the pole, but Billy Moyer darted out front at the start. Moyer stayed out front the first 32 laps, but Bloomquist made the pass by going low in traffic and never looked back.

Steve Francis got by Moyer for the second spot, but Bloomquist had enough to win by four car lengths and take the week’s big prize.

“The longer we ran, the better we got,” Bloomquist recalled. “Once we got rolling, the car was really good. The engine ran extremely good on the top end.”

This is the second of six feature stories in the “Dirt Racing Heroes” content series leading up to the historic running of the Food City Dirt Race at Bristol Motor Speedway on Sunday, March 28, 2021. The legendary BMS half-mile oval has been transformed into a dirt track with 19-degree banking in the turns and will present a challenge to the modern-day Cup Series stars as they race for victory on a clay surface for the first time since Richard Petty won on dirt at the North Carolina Fairgrounds in September 1970.

Jeff Birchfield is a veteran sports reporter for the Johnson City Press who covers motorsports as well as many other sports for the newspaper.