How Did Bristol Victory Lane Get on the Roof?

TitleHow Did Bristol Victory Lane Get on the Roof?
DescriptionIn this video, we discuss how Bristol Victory Lane came to be over the years. Thanks to David McGee for the knowledge and historical perspective. Get David’s Books Here - https://amzn.to/2z6qnzL Enjoy! For more Bristol news, please subscribe to all of our Social Media accounts and turn the notifications on!: Facebook: https://www.facebook.com/bristolmotorspeedway/ Twitter: https://twitter.com/bmsupdates Instagram: https://www.instagram.com/bmsupdates/ YouTube: https://www.youtube.com/user/ThunderValley Twitch: https://www.twitch.tv/bristolmotorspeedway/videos 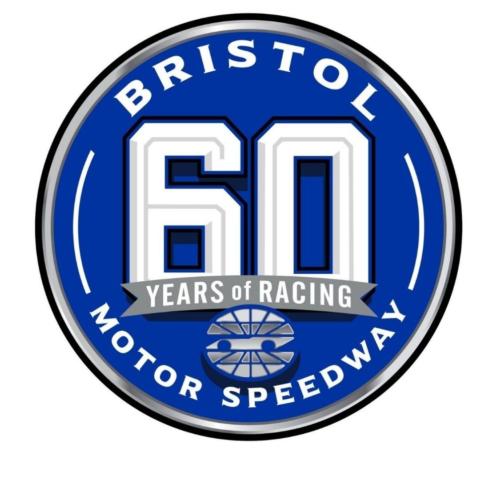 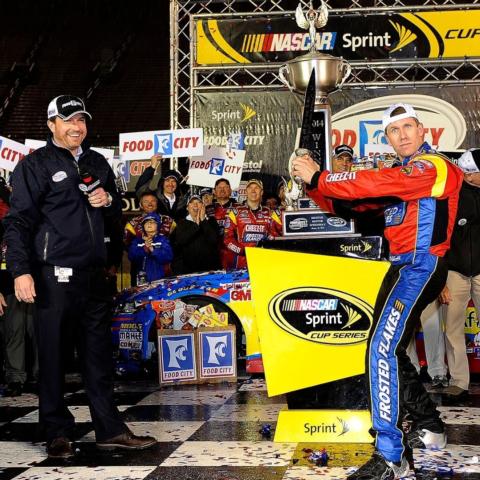 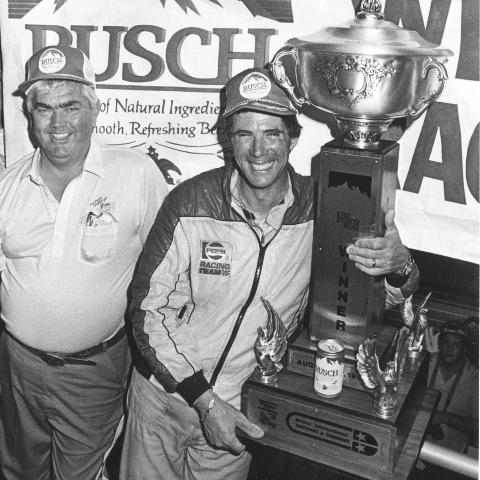 Darrell Waltrip was the first Cup driver to receive the massive BMS Cup Series trophy in 1983. 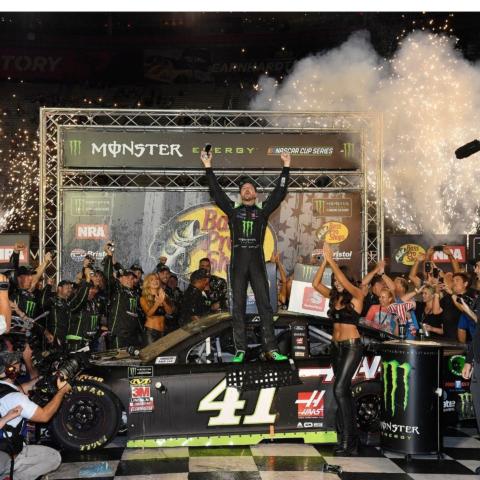 The unique BMS Victory Lane sits high up on the rooftop of one of the infield buildings. Here, Kurt Busch celebrates after winning the 2018 Night Race. 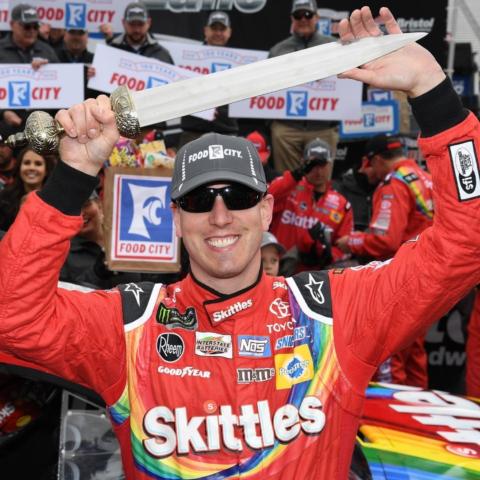 The BMS Gladiator Sword is 30 inches long with an imposing 19-inch hand-forged stainless-steel blade. It has a black leather scabbard and brass-plated sheath and handle. The official race name and date are engraved on the blade to connect each sword to its specific Bristol event. Here, Kyle Busch raises his sword in the air after winning the 2018 Food City 500.

Among the most coveted hardware on the NASCAR circuit, the iconic BMS Cup Series Trophy and Gladiator Sword combine to make drivers dreams come true if they are lucky enough to survive 500 laps of mayhem on the all-concrete high-banks and finish first at The Last Great Colosseum.

When those items are presented to the winner in one of the most unique Victory Lane settings at any of the sport’s venues – on the rooftop of one of the infield buildings – the scene can get downright crazy at times. It’s a ritual that continues to make revered Bristol Motor Speedway one of the most magical places in the world of auto racing.

As BMS celebrates its 60th Anniversary this year, the gigantic four-foot tall Cup Series winner’s Trophy and razor-sharp Gladiator Sword have become an integral part of BMS’ identity and a pair of highly-sought-after awards that every Cup Series driver wants desperately to add to his or her trophy case.

“In my opinion the combination of the classic trophy with the gladius is hard to beat,” said noted journalist and BMS historian David McGee. “Race fans everywhere recognize the massive Bristol trophy – it was in the movie Talladega Nights for goodness sake – and the gladiator sword is unmistakable because there is only one Colosseum.”

The elusive items will be up for grabs once again under the lights on Saturday, Sept. 18 when the NASCAR Cup Series Playoffs come to Bristol Motor Speedway during the running of the Bass Pro Shops NRA Night Race (7:30 p.m. ET, NBCSN and PRN Radio). The event is a high-stakes cut-off race in the Round of 16 in the NASCAR Playoffs, where four drivers will be eliminated from championship contention.

In the early days, BMS officials gave out a variety of different styles of trophies to its winning drivers. It wasn’t until 1983 that then owner Warner Hodgdon, a California native, decided to establish a signature trophy for the Cup Series races at BMS that would be large, memorable and permanent.

He had his GM at the time work with the local Bristol trophy shop, Eddie’s Trophies, to come up with the perfect prize that checked all of the necessary boxes.

“Hodgdon did things with a certain style and Bristol was his baby,” McGee said. “He wanted the winner to take home a memorable trophy – something that would dominate a trophy case and be something they would keep forever to remind them of the accomplishment of winning Bristol. The track GM contacted Eddie Allison at Eddie's Trophies with Hodgdon's directive. Allison had seen the massive four-foot-tall wood and brass trophy and knew it was a perfect fit.”

The new BMS Cup trophy made its debut at the Night Race in August 1983 and fittingly the first winner was Darrell Waltrip. Of Waltrip’s track record 12 Cup Series victories – five came with the behemoth bronze trophy.

“If you look at victory lane celebrations down through the years, many times you will see a trophy that’s a custom one-off to meet the needs of a specific sponsor,” McGee said. “Some trophies are unmistakable in their style and design - the Harley J. Earl trophy at Daytona and the Bristol trophy come immediately to mind. The BMS Cup trophy is just a classic design that represents a huge accomplishment at the sport's most popular track. Then you think about who all has won one or more of those trophies and that list represents a who's who of the modern era in NASCAR history.”

The BMS Cup Trophy is constructed with a solid wooden base with a stylish bronze cup at the top and four bronze eagles mounted around the bottom base of the trophy. A beautiful angel holding a flame high above her head sits at the very top of the trophy. There are several plates attached to the wooden base that have the event name, year and other race information included. Down the middle of the trophy is a plate that says W-I-N-N-E-R. At just over four-foot tall the trophy weighs more than 50 pounds.

“Besides being large, the Bristol Cup trophy is heavy,” McGee says. “I can think of several drivers who, in a moment of jubilation, grabbed the trophy and began lifting it over their heads only to realize it weighs 50 pounds and at four-feet-tall is rather unwieldy – not an easy feat after wheeling a stock car around Bristol for three hours. That's why in most of the trophy presentation photos, the trophy is sitting safely on the ground because nobody wants to drop it.”

Meanwhile, the BMS Gladiator Sword made its debut in The Colosseum in 2014 and Carl Edwards was the first driver to be presented with one in Victory Lane. The Sword was an integral part of the innovative marketing campaign establishing Bristol as “The Last Great Colosseum,” and using the spelling that pays homage to the historic Roman Colosseum in the center of Rome, Italy. The Sword is commonly known as a “gladius” and is something that would certainly be carried by gladiators who were frequently in battle inside the Roman Colosseum. It has proved to be the perfect fit as a symbol of earning a victory at Bristol’s Colosseum.

“Carl Edwards, being the first to receive and let alone see the sword, was very careful removing it from the scabbard,” McGee recalls. “It has some heft too, and I think he quickly realized it was very sharp. Once he got comfortable, he hammed it up quite a bit for the photographers.”

The BMS Gladiator Sword is 30 inches long with an imposing 19-inch hand-forged stainless-steel blade. It has a black leather scabbard and brass-plated sheath and handle. The official race name and date are engraved on the blade to connect each sword to its specific Bristol event.

In addition to race winners, the BMS Gladiator Sword has also been given on very special occasions to honored dignitaries, distinguished celebrities and many of the legends of the sport.

“We had launched the Last Great Colosseum marketing campaign and the Sword came out of a team brainstorm session about how could we expand on the Roman Colosseum theme and take it a little deeper,” said Drew Bedard, BMS vice president of marketing. “We had received some inspiration from different tracks and some of the things they were doing in their winner’s circles and we knew we wanted something in Victory Lane that the winning driver could raise in the air. Our traditional trophy has quite a bit of heft to it so the Gladiator Sword was the perfect item that fit our mission and objectives and it has taken off remarkably well, even more so than we could have ever imagined.”

Bedard says the BMS Gladiator Sword was an instant hit, given the immediate stamp of approval from a worldwide social media audience.

“When Carl Edwards won the first race where we presented the Sword and made such a big deal about it, Twitter just went crazy with that photo,” Bedard said. “That photo was everywhere. When we saw that, we immediately knew we were onto something. It’s really cool now to hear drivers and team members talk about it and how much they all want one. You always hope that your ideas can take off like that and we have been fortunate that this one did. It’s been a lot of fun.”

Since 2002, BMS winners have been celebrating in one of the sport’s most unique Victory Lanes. Set high atop the infield on the roof of the building that houses the Ballad Health Infield Care Center and The Apex, an exclusive luxury trackside sports bar, the BMS Victory Lane provides fans in the grandstands with an amazing view of the post-race celebrations.

McGee says the new concept for BMS Victory Lane came about due to a reconfiguration of the infield to accommodate additional NASCAR haulers and its relocation position was all about the fans.

“The old victory lane was virtually invisible from the grandstands – a bit further inside the track and facing toward turns one and two,” McGee says. “So, the only time fans at the track got to really see the celebration was after the center jumbotron was added in the infield. The old victory lane was sufficient in the early days but as media coverage, TV coverage and sponsor demands grew, it quickly became outdated. It was also in the path of where NASCAR haulers were to park. Credit longtime track president Jeff Byrd with putting it on the rooftop so the fans in turns 3 and 4 could see more of the celebrations.”

Kurt Busch was the first NASCAR Cup Series driver to wheel his winning ride up the ramp onto the BMS Victory Lane after winning the 2002 Food City 500. Today there are plenty of black tire marks up the ramp that lead to the checkerboard floor where a huge metal backdrop with sponsor and track logos frames the winning car and driver for each winner’s ceremony.

“The emotion you see from the drivers and family members when they visit BMS Victory Lane is truly special,” Bedard said. “When you win a race at Bristol you know that you are going to this elevated area and it just has this larger than life feeling about it. It’s become a very special place, a true destination for all race car drivers. The one’s who haven’t been there dream about getting there one day. You always hear young drivers talk about ‘getting to the roof at Bristol one day’ and that just puts the whole special experience into perspective.”

As the air fills with anticipation for the green flag to drop for the 2021 Bass Pro Shops NRA Night Race, Sept. 18 at 7:30 p.m. (NBCSN and PRN Radio), with so much at stake in the Cup Series Playoffs, fans can expect more magical moments to unfold in BMS Victory Lane as NASCAR’s best drivers compete in close quarters in pursuit of a coveted victory on the storied short track. You’ll get to see all of your favorite drivers racing hard to advance in the Playoffs, including Bristol dominator Kyle Busch, Food City Dirt Race winner Joey Logano, three-time Bristol winner Brad Keselowski, defending Night Race winner Kevin Harvick, Bristol All-Star Race winner and defending series champ Chase Elliott, and five-time season winner Kyle Larson, who is still looking for his first BMS Cup victory.