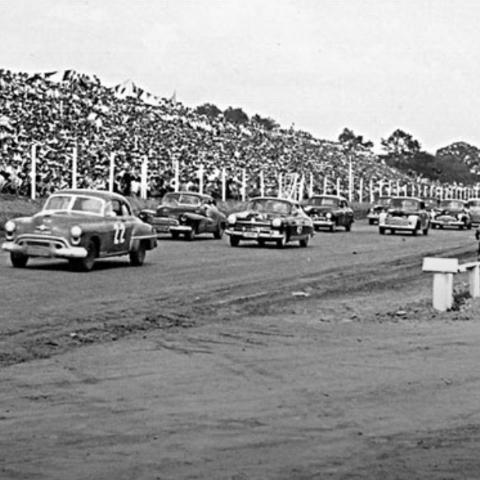 NASCAR held its first official race in June 1949 at the now-defunct Charlotte Speedway, a 3/8-mile dirt track near the Charlotte airport. Photo from NASCAR archives. 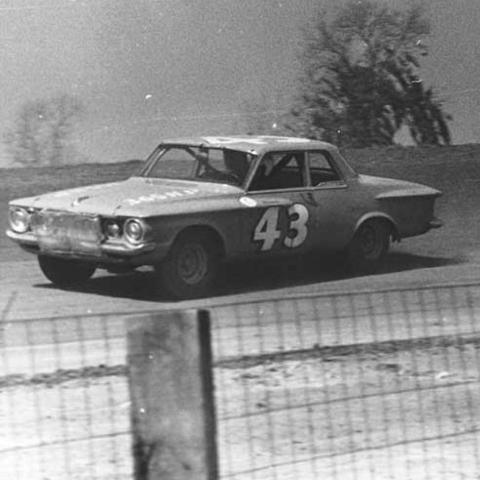 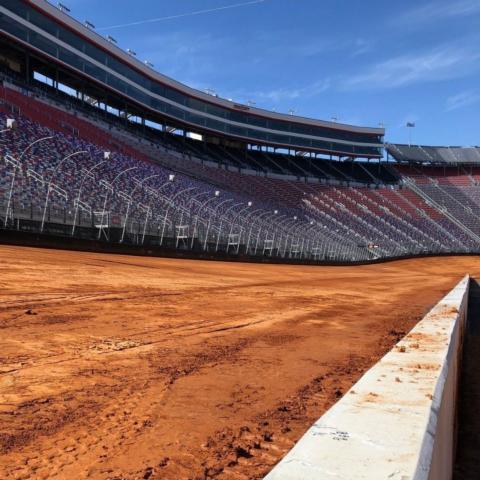 Bristol Motor Speedway will host the first dirt race for the NASCAR Cup Series in the modern era on March 28, 2021 with the Food City Dirt Race.

NASCAR Cup Series racing began in the dirt, and to the dirt it returns.

Bristol Motor Speedway’s historic Food City Dirt Race brings to mind the sport’s long and colorful history in the dust of dozens of short tracks (and a few longer ones). The foundation of America’s favorite motorsport was built in the clay of a hundred hills, scattered across the country from the shadows of big-city buildings to remote bullrings off the beaten path.

Virtually all of NASCAR’s early champions and superstars wrote their resumes on dirt, learning the art of racing by sliding through turns at ridiculous speeds, taking the next corner a little faster than the previous one and banging fenders with anyone who decided to get in the way. When races were over, they were spectacularly dirty, as were most of the grandstand residents. Dirty, but happy.

Dirt was the surface of choice for much of the Cup Series’ first decade. The series’ first race – at Charlotte, N.C., in 1949, was held on dirt. In fact, seven of the eight Cup races run that first season were on clay tracks. The series had expanded dramatically by 1951, running 41 events – 36 on dirt.

Building of giant superspeedways and the paving of such memorable dirt tracks as Martinsville and North Wilkesboro would come later. The superspeedway boom dominated the 1960s and, in 1970, the last Cup dirt race was held at the North Carolina State Fairgrounds track in Raleigh. The winner was a guy you might have heard of – Richard Petty.

Petty’s father, Lee, tops the list of Cup dirt-track winners with 42. Herb Thomas, who wandered into racing from farm fields and became an absolute master on dirt, won 41, and fearless Buck Baker was next with 40. Richard Petty made his own mark on the dirt, winning five straight dirt races – a record -- in 1967.

Some of the sport’s greatest drivers, including Junior Johnson, David Pearson and Cale Yarborough, cut their racing teeth on dirt. Johnson was hell on wheels on dirt, typically winning the race – he won 24 times on clay – or crashing his car into a fence or another car or both.

“I raced hard against Junior on the dirt at Hickory (N.C.),” Pearson remembered in an interview. “He led a lot of the race. I finally passed him. He followed me right on my bumper. I just kept cutting across coming off the second turn and slinging mud in his radiator. Got the car to running hot. He finally had to quit.”

So there was strategy in dirt racing, too.

Johnson and Pearson would follow the pioneers who slid through the early years of NASCAR’s dirt era. Several drivers – Curtis Turner, Lee Petty, Buck Baker, Herb Thomas -- who would be among the sport’s first stars were in the field June 19, 1949 at the now-defunct Charlotte Speedway, a three-quarter-mile dirt track near the Charlotte airport. It was the first race of what would become the Cup Series, and it was a wild affair.

No one, not even promoter and NASCAR founder Bill France Sr., knew what to expect. But, by early morning, fans had endorsed France’s idea of a race for “showroom stock” cars nearly identical to those driven on highways. “Cars were parked as far as four miles away,” said David Allison, whose father, Carl, owned the track. “We had people climbing trees to see. Daddy would crank up a chainsaw and go over there. He wouldn’t actually cut the trees down, but they would come out of them anyway.”

A crowd of more than 10,000 watched Glenn Dunnaway of Gastonia, N.C., take the win. But he lost the victory when officials ruled that his 1947 Ford (formerly a moonshine hauler with tricked-up back springs) was illegal, handing the win to second-place Jim Roper, who had driven his 1949 Lincoln from Kansas to participate in the race. He drove the car home after the race and never won again.

That race – on a very bumpy, lumpy track – and many other dirt affairs over the years tested drivers to the extreme, particularly as race lengths were extended from the 25-lap weekly-track events many had experienced to 200-lap marathons.

“Drivers today don’t know how tough it was to get out of a car and blood be running out of your hands,” remembered short-track ace Jack Smith. “You didn’t want to do it, but if you wanted to make a living you had to keep going.”

Turner, 13 times a winner on dirt, was one of NASCAR’s first dirt stars. His powerslide through the turns is remembered as a thing of beauty, and he rarely backed down from a challenge.

“Turner was hard-headed,” understated driver Buck Clardy. “I went up to Charlotte to run on the old three-quarter-mile dirt track up there, and, of all the people to pick on, I picked on Curtis Turner. He and I hooked up, and I spun him out. It was the first time I’d ever seen him. He was mad, and I was, too. He pushed me, and I pushed him. We got over it, years later.”

Buddy Baker, who would later shine on NASCAR’s superspeedways, remembered asking Turner for advice before his first race at the super-fast .9-mile Occoneechee dirt track at Hillsborough, N.C. Turner told him where to back off entering the first turn. “At that point, I might as well have kept it wide open because I wasn’t going to make it through the corner anyway,” Baker said. “I went backward through the gate and into the parking lot. I came back in and said, ‘Hey, are you sure you drive it in that deep?’ He said, ‘Yeah, but I’ve got 20 years’ experience.’ ”

Cup Series dirt racing ended – that is, until its revival this year at Bristol – in the Home State 200 Sept. 30, 1970 at the half-mile N.C. fairgrounds track. Richard Petty led the final 112 laps of the race, outrunning second-place Neil “Soapy” Castles by two laps. Only 12 drivers finished the race, and NASCAR left the dirt trail behind, continuing its march into a changing future that was paved totally with hard surfaces. Until now.

This is the first of six feature stories in the “Dirt Racing Heroes” content series leading up to the historic running of the Food City Dirt Race at Bristol Motor Speedway on Sunday, March 28, 2021. The legendary BMS half-mile oval has been transformed into a dirt track with 19-degree banking in the turns and will present a challenge to the modern day Cup Series stars as they race for victory on a clay surface for the first time since Richard Petty won on dirt at the North Carolina Fairgrounds in September 1970.

Mike Hembree is a veteran auto racing reporter based in South Carolina who has covered NASCAR racing since 1975. You have read his work in USA Today, AutoWeek, the Arizona Republic, Indianapolis Star, Detroit Free Press and many other newspapers and magazines.