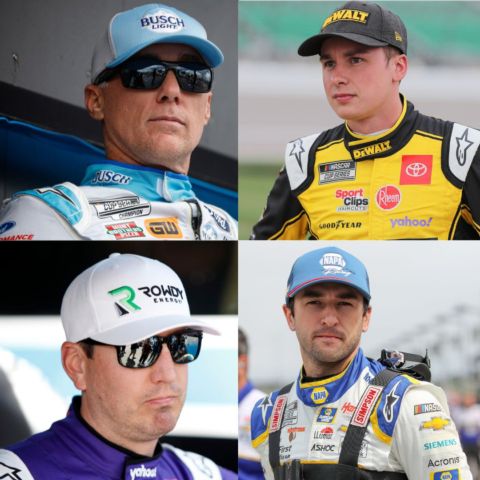 FOUR BRISTOL STORYLINES: (from top left, clockwise) Kevin Harvick enters the Bass Pro Shops Night Race needing a victory to advance in the NASCAR Cup Series Playoffs; Christopher Bell is the only driver on Saturday racing worry-free as he has secured his spot in the Round of 12 Playoffs; Chase Elliott is a fan-favorite at Bristol and won the 2020 All-Star race at Thunder Valley; and Kyle Busch, the winningest active Cup Series driver with 9 Bristol wins, is also below the cutline entering the race and needs a good finish. It will be his last race at Bristol with Joe Gibbs Racing as he has signed a contract with Richard Childress Racing for 2023. 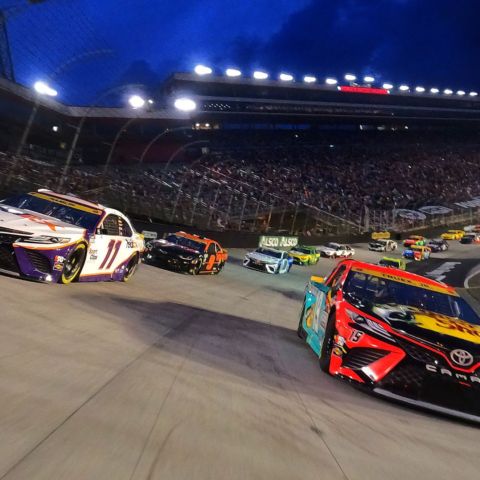 The Bass Pro Shops Night Race is an elimination race for the Round of 16 NASCAR Cup Series Playoffs.

If you are into numerology, then picking the winner of this weekend’s Bass Pro Shops Night Race should be pretty simple. The mathematical pattern of the last two weeks points to the No. 47 Chevy driven by Ricky Stenhouse Jr. as the sport’s next winner.

The veteran Mississippi driver also fits the current trends: not a Round of 16 Playoff driver and also hasn’t won a race this season.

The NASCAR Cup Series Playoffs has opened with a lot of unpredictability, as two non-Playoff drivers have claimed trophies the past two Sundays. Erik Jones stunned everyone by powering to a true “Throwback” victory in the iconic No. 43 Chevy at Darlington’s Playoff opener. Bubba Wallace kept the storyline alive Sunday in Kansas when he became the season’s 18th different winner in the second Playoff race, piloting the No. 45 for 23XI Racing to Winner’s Circle.

While that 43-45-47 scenario is fun one to dream about, this is The Last Great Colosseum, and with so may drivers’ Playoff fates up in the air this weekend, it truly promises to be like an intense Gladiator battle once the green flag drops on Saturday at 7:30 p.m. (USA Network, PRN Radio, Sirius XM NASCAR Radio).

Stenhouse is a self-confessed Bristol lover, having posted a bunch of second place finishes in his career at The World’s Fastest Half-Mile. So if we see him standing in Bristol’s famed rooftop Victory Lane late Saturday night posing for photos, it wouldn’t be that much of a surprise to anyone.

However, sometimes mathematical patterns just don’t apply when it comes to the chaos, mayhem and drama that Bristol seems to consistently deliver.

While Stenhouse would be an excellent pick, the truth is there are other numbers at work. There are so many drivers who run great at Bristol that the cast of potential winners could be covered by a very wide net. As most drivers will tell you, Bristol victories most often come to those who were best at staying out of trouble and surviving 490 laps just to be there at the end.

After two races in the Round of 16 only Christopher Bell is safely in the Round of 12 and enters Bristol worry-free. The other 15 Playoff drivers who have championship dreams will have to put it all on the line on the iconic high-banked all-concrete bullring where so much NASCAR history has unfolded. That .533-mile oval of steeply graded concrete is so highly revered, some have called the venue “The Holy Grail of Short Tracks.”

Certainly, at the top of the Bristol favorites has to be Kyle Busch, who has won nine Cup Series trophies at Thunder Valley including the Food City Dirt Race in April. As an added plotline, he will be making his final Bristol start for Joe Gibbs Motorsports in the famed No. 18 machine on Saturday night. Earlier this week Busch announced he will drive the No. 8 car for Richard Childress Racing starting in 2023.

Others to watch include the defending Night Race winner Kyle Larson, who runs the high side at Bristol as well as anyone. Then there’s Chase Elliott, Tyler Reddick, Denny Hamlin, Kevin Harvick, Ryan Blaney, Austin Dillon and Joey Logano, to name a few, who could easily take home the massive BMS Trophy and Gladiator Sword on Saturday night.

And when you factor in the Next Gen car’s first visit to Bristol’s concrete surface, past results and expectations can definitely be tossed out the window.

As Dale Earnhardt Jr. said on Sunday’s NBC broadcast as he looked ahead to the Bass Pro Shops Night Race, “We’ve got an incredible battle around the bubble for the Playoffs going into Bristol, which is a very unpredictable race track. We expect it to be physical. Every race has been more physical than we could imagine all year long. We expect Bristol to be a new high in terms of physicality.”

While the scenarios are plenty for the 15 drivers, and if you want an in-depth look at all of the possibilities you should check out reporting ace Bob Pockrass’ Twitter feed, but to break it down in the most simple of explanations, the large majority of the drivers, barring a complete catastrophe, have a chance of advancing just by finishing above a certain spot in the order.

The only driver who enters the race in a must-win situation is three-time Night Race winner Harvick. His scary fire at Darlington combined with his last place finish at Kansas puts him in that unenviable position.

“Yeah, it is what it is,” Harvick said late Sunday. “We were racing to win anyway (at Kansas), so that’s what we will do again (at Bristol).”

Harvick’s teammate, Chase Briscoe, who is 15th in the Playoff order, nine points below the cutline, summed up what’s going to happen at Bristol, quite succinctly.

“It’s going to be chaos this time around,” Briscoe said. “Not even just for the win, but literally all throughout the field. Every point is going to matter. It’s just how these Playoffs are right now, the end of the race is going to be insane. All 500 laps will be wild because this Next Gen car hasn’t seen anything like Bristol. My guys have been double and triple checking everything to make sure we don’t miss anything. Bristol will quickly expose any kind of weakness you have in the car. I definitely think it’s going to be intense from start to finish. As a fan, I’m looking forward to it and I’m excited to see how it turns out, but as I driver I’m really excited too.”