Chris Buescher is the defending winner of the Bass Pro Shops Night Race at Bristol Motor Speedway, which will air on USA Network on Sept. 16, 2023. 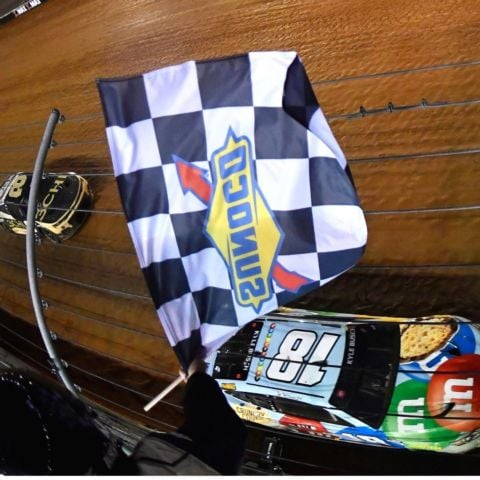 Kyle Busch is the defending winner of the Food City Dirt Race, which will air on FOX at 7 p.m. on April 9, 2023 at Bristol Motor Speedway. 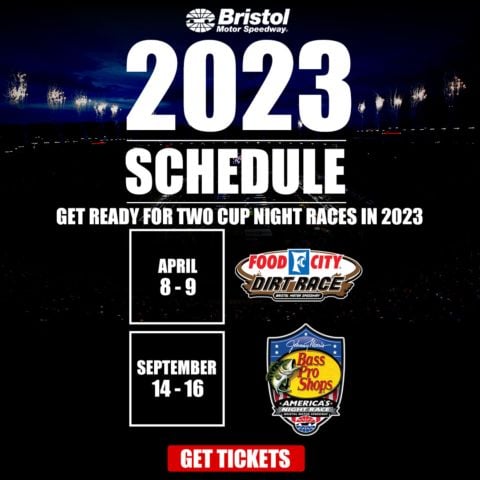 Iconic Bristol Motor Speedway will host both of its 2023 NASCAR Cup Series races in primetime it was announced today by NASCAR and track officials. The historic Food City Dirt Race will be contested under the lights on the second weekend in April and the Bass Pro Shops Night Race playoff thriller also will take the green flag after dark in mid-September.

The Food City Dirt Race, which once again will bring the NASCAR Cup Series back to its dirt racing roots, is scheduled for a 7 p.m. ET start on Sunday, April 9, and will be televised live on FOX with live radio coverage on PRN Radio and Sirius XM NASCAR Radio. In addition, the weekend will feature Bush’s Beans Qualifying to set the fields for the Food City Dirt Race.

The Bass Pro Shops Night Race, the first cut-off race in the Round of 16 in the NASCAR Cup Series Playoffs, will get underway at 7:30 p.m. on Saturday, Sept. 16. The 500-lap race that will trim the Playoff field from 16 to 12 drivers will air on NBC Universal-owned USA Network, PRN Radio and Sirius XM NASCAR Radio.

“NASCAR Cup Series racing just feels right under the lights at Bristol Motor Speedway and we are thrilled to be able to showcase both of our NASCAR Cup Series races in primetime in 2023,” said Jerry Caldwell, president and general manager, Bristol Motor Speedway. “We look forward to another wild finish in the Food City Dirt Race on Easter Sunday night. Then for the first time in history at Bristol, we will host Playoff races in all three of NASCAR’s major series on the same weekend, concluding with the Bass Pro Shops Night Race playoff elimination race on USA Network on Saturday, September 16.”

Start times and television networks for the three Bristol support races in 2023 also were announced today. The Truck Race on Dirt featuring the NASCAR Craftsman Truck Series will be held under the lights with an 8 p.m. ET start on Saturday night April 8, and will be broadcast live on FS1, MRN Radio and Sirius XM Radio.

The NASCAR Xfinity Series’ only visit to BMS in 2023 will be the Food City 300, held on Friday night, Sept. 15 with a 7:30 p.m. ET green flag. The race will be the Playoff opener for the Xfinity Series and will be broadcast live on USA Network, PRN Radio and Sirius XM NASCAR Radio.

The Craftsman Truck Series will make a second appearance at BMS in the fall and will once again open the second round of their Playoffs during the UNOH 200 presented by Ohio Logistics on Thursday night, Sept. 14 at 9 p.m. ET with television coverage provided by FS1 and radio coverage by MRN Radio and Sirius XM NASCAR Radio. The ARCA Menards Series will once again join the Craftsman Trucks at Bristol for a Thursday double-header, with the green flag for the Bush’s Beans 200 set for 6:30 p.m. (FS1/MRN Radio).