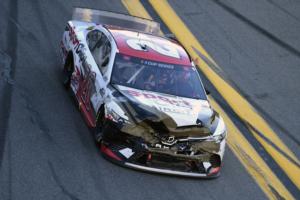 DAYTONA BEACH, Fla. - Denny Hamlin couldn't win the Busch Clash at Daytona for himself, but he made sure his Joe Gibbs Racing teammate did.

For nearly the entire final lap in the third attempt at overtime, Hamlin pushed the mangled Toyota of Erik Jones all the way to finish line in a race that saw only six of 18 cars running at the finish.

With the nose of his car caved in and held together with tape, Jones led only the final lap—the 88th of the race and the 13th of overtime—in collecting his first victory in the season-opening NASCAR Cup Series exhibition race.

Jones' No. 20 Toyota Camry sustained heavy damage during a spate of wrecks that started on Lap 66 of a scheduled 75 and continued into the extra circuits. Hamlin, whose No. 11 Toyota was damaged in the Lap 66 and spun with a flat tire in the first overtime attempt, lost two laps on pit road after the incident.

But Hamlin's car was still running at the finish, and he was there to push Jones past the lead-lap cars of Austin Dillon, Ryan Newman and Clint Bowyer on the last circuit.

That's exactly what Jones did, even though his battered machine looked more like a refugee from a salvage yard than the sleek race car that started the race.

"It was an awesome race," Jones said. "I've got to give a huge thanks to Denny. He gave us a huge push that last run. It wasn't the fastest car in the race, but we brought it home.

"I think, honestly, it was so draggy it wasn't too much for him to lock on and push us to the win. Hopefully, next Sunday (in the Daytona 500) we can cap off another one."

Five drivers have completed a Clash/Daytona 500 double. Hamlin accomplished the feat most recently, in 2016.

By the time Dillon led the field to green to start the third overtime on Lap 87, 11 cars already had gone to the garage in various stages of disrepair. The mayhem began on Lap 66 when Joey Logano tried to block Kyle Busch in Turn 4 and contact between their two cars triggered a six-car crash that eliminated Busch and Brad Keselowski, Logano's Team Penske teammate.

Six laps later, the majority of the field wrecked on a restart, when the "accordion effect" produced a chain-reaction incident near the start/finish line.

The first two overtime attempts pared the field to six cars on the track, with Dillon coming home second, .697 seconds behind Jones. Bowyer was third, followed by Kyle Larson, who held the lead briefly in the final overtime but lost ground on the final lap.

Newman came home fifth, followed by Hamlin, who finished one lap down.