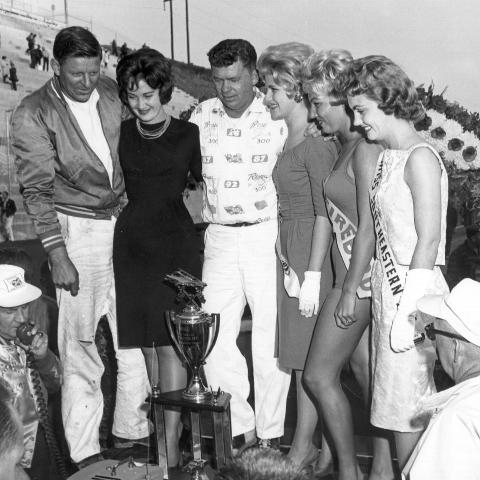 For all of you serious stat geeks and track history buffs, your mind is about to be blown.

Technically, in 1961 and 1962, NASCAR's second stop in East Tennessee during each of those seasons was actually to conduct the race that we now refer to as the Spring Race - the Southeastern 500 -- or better known today as the Food City 500.

The 1961 Southeastern 500 was actually held in late October that year. The race was won by popular Virginia driver Joe Weatherly and it was surrounded by championship implications. The championship points structure was somewhat complicated back in those days as a few races paid quite a bit more points than others.

You can put your calculator away. The main thing you need to know is that to successfully defend his title from the year before, Rex White needed a victory that afternoon and also needed rival Ned Jarrett to have a bad race. Well, White did all he could do by finishing second to the super-fast Weatherly, but Jarrett managed a sixth place finish and in doing so locked away the season long championship crown.

As the NASCAR Cup Series prepares for its return to Bristol Motor Speedway on May 31st for the milestone 60th running of the Food City 500, the modern day relative of the Southeastern 500, race teams will be working hard to earn victories and gain valuable regular season points in the new era of NASCAR, which includes three stages during the event, with stage breaks at 125 laps, 250 laps and then onto 500 in the winner-take-all 250-lap final stage.

"Being the fastest was very important to Larry," said Speedway ownership partner Carl Moore, as told by noted racing historian David McGee in his popular book, Tales of Bristol Motor Speedway. "He made getting that title a priority."

In a press conference in 1969, Carrier announced his plan to totally reconfigure the track and give the banking a lift to the 30-degree range. In the next race, Cale Yarborough powered to a pole-winning speed of 103.432 mph, which was 13 mph faster than Asheville-Weaverville and 15 mph faster than any other half-mile track. In fact, seven cars topped 100 mph in that weekend's qualifying, solidifying the claim even more.

Asheville-Weaverville hosted only one more NASCAR Cup Series race after that and didn't threaten the new BMS mark. The N.C.-track became a victim of urban sprawl as the site where the racetrack once stood is now the location of the North Buncombe High School.

"It's the perfect designation for a short track that races like a superspeedway," McGee said. "It remains an integral part of the track's identity, marketing, and fan appeal."

NASCAR and Bristol Motor Speedway have developed a comprehensive plan reviewed by state and local health agencies to protect the health and safety of the competitors, crew members, employees and broadcast crews that will produce the race. The plan includes limiting overall personnel, pre-event screening, social distancing on site, using personal protection equipment and sanitizing areas of the facility both before and during the event.

"As America fights its way back from the pandemic and the economic shutdown, we're proud to be one of the first major sports back on television," said Jerry Caldwell, BMS executive vice president and general manager. "The 60th running of the Food City 500 will be history making as NASCAR is uniquely positioned to return to competition for its dedicated fan base and we're proud to do our part at Bristol Motor Speedway. We ask every race fan to please tune in to FS1 and PRN for Saturday's Cheddar's 300 presented by Alsco and the milestone 60th running of the Food City 500 Sunday from the comfort of their homes."

*Shipping, handling and services fees not included in event credits or refunds. Ticketholders have 30 days to request a refund; those who do not request a refund will automatically receive the 120-percent credit