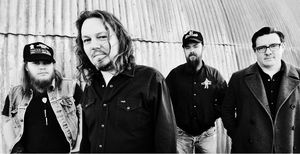 There's nothing like the mix of racing and music and Bristol Motor Speedway will have plenty of both during the upcoming Bass Pro Shops NRA Night Race week.

The Steel Woods will perform the post-race concert on Friday night, following completion of the Food City 300 NASCAR XFINITY Series race. They will perform at the NASCAR Trackside Live Stage, located in the Fan Zone near the iconic Bristol tower outside Turn 2. The Steel Woods, whose debut album Straw in the Wind was released in May, are working their way towards the top of the charts. The group's album sits at No. 29 on the Americana Radio Chart. They recently made their Grand Ole Opry debut in July and were so well received that they were asked to return August 8 for a second show.

Stinson, who is no stranger to Bristol having played at numerous races and the Pilot Flying J Battle at Bristol, will perform on Thursday at 5:30 p.m., prior to the Fitzgerald Peterbilt Transporter Parade. Stinson, a native of Lumber City, Ga., has toured with some of country music's biggest names and will bring a kick-in-the-teeth country sound to his concert, which will take place at the North Entrance marquee.

Announced last month, Jinks will bring his unique outlaw country and classic Southern rock sound to the Bass Pro Shops NRA Night Race pre-race concert on Saturday, Aug. 19. He features an authentic blend of country and rock styles that have built a popular fan base among different sectors of music fans. His covers of Pink Floyd's "Wish You Were Here" and Soundgarden's "Black Hole Sun," which was dedicated to the late Chris Cornell, have earned universal praise from critics and fans alike.

Other entertainers to perform throughout the weekend include Andy Ross, Arista Manning, Shake it Like a Caveman, Wyldeheart, Bill Crawford Band, Rossdafareye and Moose Roberts.