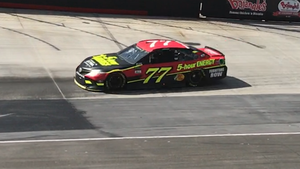 As the Monster Energy NASCAR Cup Series continues its march toward the end of the 2017 season, two competitors made the trek to Bristol Motor Speedway Tuesday for an official Goodyear Tire Test.

Jones, who is moving next season to Joe Gibbs Racing from Furniture Row Racing represented Toyota, while Dillon, who drives for Richard Childress Racing's satellite operation Germain Racing, got behind the wheel of an RCR Chevy SS.

Jones was pleased with what was accomplished on track today.

"It was good," Jones said. "We really just ran through some different tire constructions they were looking at on the right side and a couple different compounds for the left side. Nothing is decided from this one test, but it helps them make a decision in the next couple of months. They are just looking for a little bit more durability in the right side tire; we had a few failures here in the spring and fall race. they can get that figured out. All of them really felt pretty good. We'll see where they go with it. It was a productive day I thought."

Bristol has been a good track for both drivers in the past. Dillon has run well at The World's Fastest Half-Mile, finishing in the top 10 eight times in nine attempts in NXS and claiming a top-15 finish in last April's Food City 500. Jones has won the previous two Fitzgerald Glider Kits 300 NASCAR XFINITY Series April races and had a banner weekend during August's Bass Pro Shops NRA Night Race, sitting on the pole and finishing a career-best second.

"It was a good weekend for us," Jones said of his recent stellar run at America's Night Race. "It was kinda hard not to say it was the highlight of the year; it was definitely one of our best races, one where we ran up front all night and just didn't quite have enough at the end. We've been close in a few other races, but that's definitely one that stands out. It felt like one that slipped away from us. It was a great weekend for us overall and a huge confidence boost and shows us we can contend for these race wins and we just have to figure out that last little step to get through to Victory Lane."

Jones has been on somewhat of a hot streak recently, posting seven top-10 finishes in the last eight races, including his effort at BMS. He says getting the opportunity to come out and assist Goodyear and grab some more seat time at Bristol is a win-win.

"Anytime you can make laps at a place you are a little more confident and comfortable in knowing what you need," Jones said. "I was glad they put down the traction compound (today). I was hoping they would. It really made it pretty realistic to the race weekend, so I think I learned some things in long run speed that will help us out in driving style and hopefully will apply when we get back."