TitleBristol Dirt Track Time Lapse - Progress from January and February!
DescriptionEnjoy this video from our friends at EarthCam of the amazing progress (and weather) in making the Dirt Track at Bristol Motor Speedway. For tickets - http://www.ItsBristolBaby.com 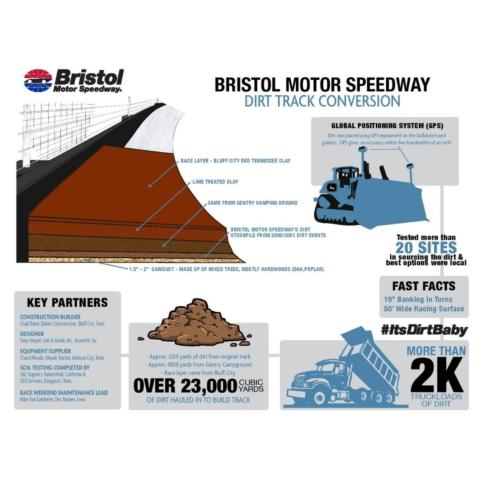 So just how does one go about building a dirt track?

It’s truly a scientific process, but according to Steve Swift it’s not actually rocket science. The biggest difference, he says, is the majority of dirt tracks are built on a dirt foundation. With this conversion, the dirt track is being constructed on top of what many have called the ‘Holy Grail’ of short tracks.

Swift, senior vice president of operations and development for Speedway Motorsports, who has spearheaded the effort to transform iconic Bristol Motor Speedway’s hallowed all-concrete half-mile racetrack into a temporary dirt racing facility over the past three months, says getting the facility into working order has taken time, research, planning, consultations with dirt track experts, and plenty of patience.

Swift has been involved in a lot of complex engineering projects during his years at Speedway Motorsports, like building the mega screen Colossus TV at BMS, constructing a four-lane dragstrip at zMAX Dragway, and developing the ROVAL at Charlotte Motor Speedway, but he says he’s having a ton of fun with this project at Thunder Valley.

“As an engineer, anytime you get to play in the mud while you are on the job, it’s a good day in my book,” says Bristol native Swift with a smile. “I’ve been fortunate to work on some great projects during my time with Speedway Motorsports. When you work for visionaries like Bruton and Marcus Smith you know you are going to be engaged in some intriguing projects. Converting Bristol Motor Speedway to dirt is one of those challenging, but fun projects.”

And despite the challenges of completing such a project in the middle of winter, Swift says he and his team, which is comprised of Baker’s Construction Company and plenty of John Deere equipment from BMS partner Meade Tractor, is on schedule to have the dirt track ready for the Bristol Dirt Nationals, March 15-20, the Food City Dirt Race weekend March 26-28 and two World of Outlaws weekends in April (8-10 and 22-24).

As the calendar turns to early March, the crew is putting in the finishing touches to the project, which includes installing timing loops, tilling the surface, hanging a new temporary pit entry gate and running plenty of packer cars to groove and prime the racing surface.

To get to this point, Swift says it all started with spreading a mountain of sawdust around the track back in January.

“We started out placing sawdust on the track,” Swift said. “The reason we do that is to make sure that we when we clean the track up we have a way to get it off without staining the concrete and get the track ready for the Night Race in September. It also helps with the cleanup.”

Once the sawdust layer was down the team then added the fill dirt. The fill dirt was actually the same dirt that was placed on the track in 2000 and 2001 when BMS first held dirt races. The fill dirt was being stored at a BMS facility a few miles from the track and was hauled over in about 1,500 truckloads.

The next layer came from Gentry Campground, a facility located close to Bristol Motor Speedway. Then the racing surface dirt was added, which was found at a local source that Swift refers to as “Bluff City Clay.” Swift says he consulted with a variety of dirt experts and local dirt tracks to determine the actual type of Tennessee dirt that would create the best surface for the racing layer.

“There is a lot of science to dirt racing and the type of dirt that you race on,” Swift said. “We had to look for different types of dirt, there’s a lot of red clay in the area, but there’s good red clay and bad red clay. We’ve talked with a lot of experts, to people who know a lot more about dirt than anyone would ever want to know about dirt. We took samples and sent them off to have them tested and found the right mixture. Once we found the right dirt it was a matter of how to get it to the site in a timely manner. We found enough to cover the track and to have a great racing surface.”

Overall, Swift says there was 23,000 cubic yards of dirt hauled in to build the track and that translates to roughly 2,300 truckloads of compacted dirt. The dirt was placed in the proper locations using Global Satellite Positioning (GPS) equipment on the bulldozers and graders working the job. In the turns there was 9-10 feet of dirt placed to bring the banking to 19 degrees. Along the front and backstretch there will be 1-2 feet of dirt and about a foot of dirt in some of the smallest fills around the track. The total racing surface on the track will be about 50 feet wide.

Swift says there’s better technology around today to help his team get the dirt where it is supposed to go versus how they built it in 2000 and 2001. For instance, he says, the GPS system has been huge.

“There is a GPS system on our dirt moving equipment that is talking to roughly 26 to 30 satellites at a time that are relaying positioning information in correlation to where on the track the blade needs to be,” Swift says. “With the GPS system it gives us an accuracy within five-hundredths of an inch. You are talking about the fineness of a hair. It’s quite amazing technology actually.”

During the two weeks ahead, Swift says his team will be in a constant grooming process, working the dirt daily to keep it where it needs to be for racing. He says adding the correct moisture content to the dirt is key, to keep dust to a minimum.

“To be a great entertaining event for the fans and the competitors we need to make sure the dust levels are staying down,” Swift says. “We’ve got dirt tracks in Charlotte, Texas and Las Vegas and we’ve had dirt events where the dust became an issue, so one of the biggest obstacles for us is the fact of putting new dirt on that’s never been raced on, we need to learn what the dirt does in different conditions. That means we will have a lot of tiller work coming up with water trucks and packer cars to get the race surface to where we want it.”

Swift says with so many different series of racing coming to BMS over the next two months to compete on the dirt track, he says the track will need to be flexible in setup for the variety of different race circuits.

“In the dirt world, each series likes a little different dirt prep,” Swift says. “Some like it slicker, some like a little more cushion, so it’s more of a track prep situation for each of the different races. But the way it looks overall will be similar.”

Swift says he is thankful to the vast input he has received from various dirt tracks and dirt gurus across the country for this project. He says their help was a huge benefit.

“We have been fortunate,” Swift says. “There have been a lot of people who have been more than willing to help, especially a lot of the local tracks around here like Bulls Gap, Maryville, Seymour and Wytheville. They have all have been more than helpful to give wisdom and tell us what type of dirt we are dealing with and what they deal with when they run their events. We’ve done a lot of research. We’ve reached out to tracks in California, Iowa, Missouri and so many others, the list is really long. They are all happy to help us and see this as a big win for the dirt world. To see the big series racing on dirt is exciting for the dirt world as well.”

For ticket information to any of the upcoming dirt events, please visit www.bristolmotorspeedway.com or call the BMS Ticket Sales Center at (866) 415-4158.

To make the events as safe as possible for all attendees, BMS is instituting procedures to reduce contact and crowd density as guests and competitors purchase tickets, enter the grounds, enjoy the event and depart the facility. Face coverings will be a required accessory in high-traffic areas inside and outside the stadium for all guests who attend. The “Mask Up” campaign is part of an important initiative by Bristol Motor Speedway that strongly encourages the public to wear face coverings, not only when they are visiting the Speedway, but also when they are out in the surrounding communities as well, and to follow all of the necessary protocols and guidelines to do their part to help reduce the spread of COVID-19.