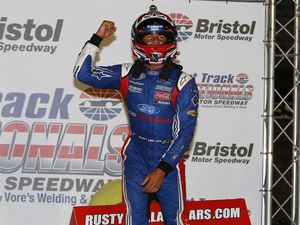 The legendary No. 43 machine of Richard Petty Motorsports will continue on in 2018 with the addition of Darrell "Bubba" Wallace Jr. Wallace, who was formerly a member of NASCAR's Drive for Diversity and NASCAR Next programs, will take over the iconic ride that has won seven championships.

In honor of this exciting news, here are some of Bubba's highlights involving The Last Great Colosseum:

Wallace tasted his biggest success at the Speedway this past May when he competed in the Short Track U.S. Nationals. Racing in a Super Late Model for the first time in his career, Bubba became a true gladiator, piloting his SLM at ludicrous speed. Wallace moved his way to the front and ran away in dominating fashion to pick up the win, his first at The World's Fastest Half-Mile.

.@BubbaWallace takes home the victory in Super Late Models at the #ShortTrackNationals. This is Bubba's first career #ItsBristolBaby win! pic.twitter.com/8dSuGAZT4w

While hyping the upcoming Bristol races in April 2016 in Nashville, Bubba took on one of his biggest challenges yet: an ice tricycle race during intermission at a Nashville Predators game. (SPOILER ALERT: He won….but barely).

Bubba Knows Rocky Top: As the son of a former All-American track star at the University of Tennessee, Bubba's blood runs orange. Along with BMS, he was able to test out his own capabilities of being a UT sports star when he participated in spring drills with Team 120 last year. While it became clear that he should stick to racing for a living, he was able to experience everything that goes into making a successful football team.

During the 2016 Food City 300 NASCAR XFINITY Series race, Wallace cemented his status as a fan favorite at the Colosseum when he unveiled his race helmet, a replica of the smoky gray alternate helmets used by the Tennessee football team. The Vols hit the field just a few weeks later at the Pilot Flying J Battle at Bristol, the largest college football game in history. (His buddy Ryan Blaney repped a Virginia Tech helmet that weekend too…talk about a #rivalry)

Bubba Wallace is wearing this during today's race at #Bristol #GBO pic.twitter.com/VZwdtreJ7b