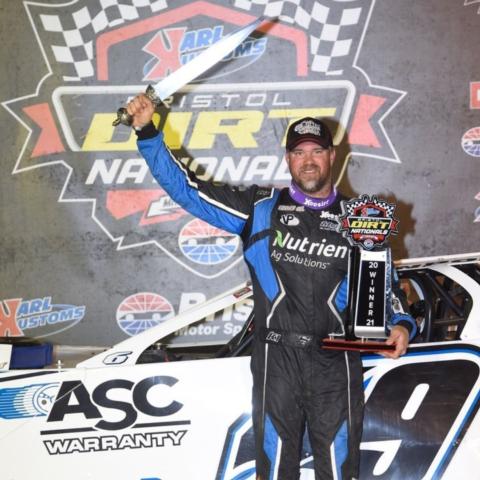 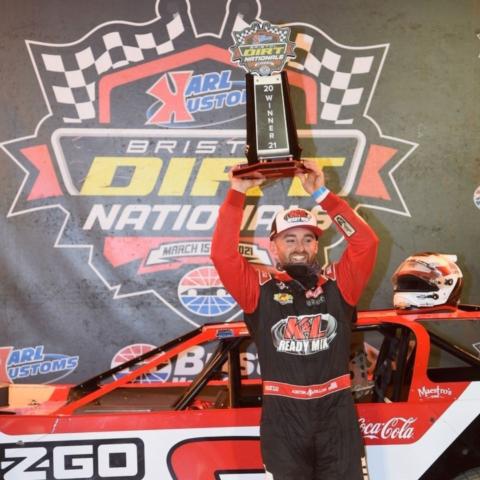 Davenport showed exactly why he’s nicknamed “Superman,” blowing by NASCAR Cup Series star Kyle Larson with 15 laps to go and racing away for a 3.5-second win, pocketing $50,000 in the process.

“This ranks right up there with anything I’ve done… it’s the second or third biggest. I put so much emphasis on this race,” said Davenport, who is from Blairsville, Ga. “I just love this place in general. I think it means a lot for us to be here. We’ve had this circled on the calendar for a long time. It means a lot to me.”

Chris Ferguson, who started on the pole and had won a $10,000-to-win Super Late Model race in Friday’s Karl Kustoms Bristol Dirt Nationals, fell out of the lead early and wound up seventh.

Larson dominated a 10-lap heat race early in the evening, racing to a comfortable win. But he said he was no match for Davenport in the feature.

“It was a fun race, even finishing second. The track was really good, we were able to move around,” said Larson, who will be back on track here next weekend for the Food City Dirt Race NASCAR Cup Series race.

“Davenport was just a lot better than me. He blew my doors off and put a straightaway on me and maintained it.”

Despite starting deep in the field, Davenport was able to quickly work his way toward the front and by the half-way point he had wrestled the lead from Larson.

“You just never know how things are going to play out. I think it took me maybe 10 laps to get going good. We fired back off on a restart and I could just go by them. I knew then we had a good car,” said the 38-year-old Davenport. “Then we started along Scott (Bloomquist) on a restart, and we fired off so good. I could run wide open through the center. At that point I knew I was going to be really good on the long runs.”

He started 19th in the feature and wound up 11th, one lap down.

“This was a lot of fun, a blast all weekend long,” said Dillon, who won three events during the week, including a heat race and feature on Tuesday. “It was a good tune up for next weekend.”

The 20-lap Stock Car race was a family affair with 16-year-old Dallon Murtry beating his father Damon Murty for the win. Derrick Agee wound up third.

In the 18-lap Hornet feature, Jake Benishek was the winner with Jason Ketron second and Kyle Stark third.

The Food City Dirt Race at the dirt-transformed Bristol Motor Speedway is the first race on a dirt surface for the NASCAR Cup Series in more than 50 years. Richard Petty won the last Cup race on dirt in 1970 at the North Carolina State Fairgrounds in Raleigh.

The Food City Dirt Race will air on FOX and PRN Radio at 3:30 p.m. on Sunday, March 28. The weekend also will feature Bush’s Beans Practice Day on Friday, March 26 and the Pinty’s Truck Race on Dirt for the Camping World Truck Series on Saturday, March 27, with the green flag dropping under the lights at 8 p.m. and race coverage by FS1 and MRN Radio.