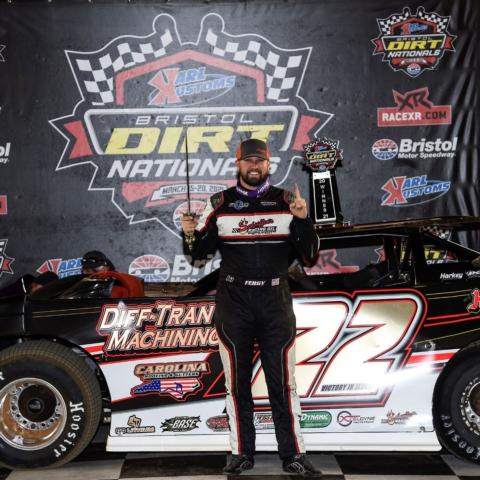 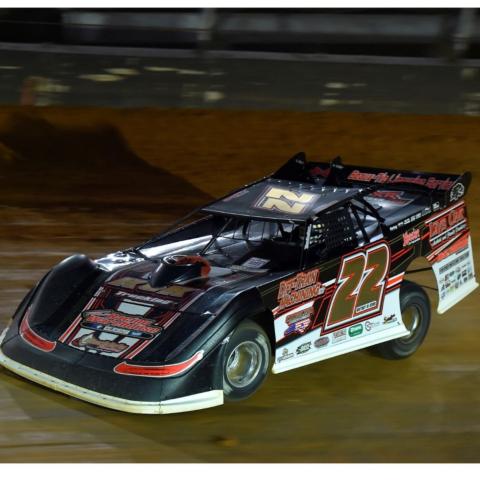 Chris Ferguson has won some big races in his career, but Friday night at Bristol Motor Speedway he said he won the biggest one yet.

Ferguson held off a star-studded field of racers to win the 25-lap Super Late Model feature at the Karl Kustoms Bristol Dirt Nationals and pocket the $10,000-to-win payday. The North Carolina native will be the favorite to win Saturday night’s big 40-lap, $50,000-to-win Super Late Model A main feature.

“This one is at the top of the list for sure,” Ferguson said. “Winning at Lucas Oil Raceway (Indianapolis) was really cool, but when we came to Bristol, it was like wow, this is a whole another animal. The guys that ran second and third are the best in the world, and we were able to beat them tonight.”

Ferguson posted the quickest lap of the race, on lap six, when he clocked in at 15.52 seconds. He clearly had found the quickest way around the temporary dirt-filled iconic .533-mile oval that’s produced so many memorable racing moments over the years.

“The half-miles are always fun for me, I truly enjoy the speed,” Ferguson said. “It really brings out the skills of the driver because you can’t make mistakes, because one little slip and you will lose quite a bit of time and track position.”

In addition to second place finisher Larson, the race featured two other Cup Series regulars in Chase Elliott and Kyle Busch. Defending Cup Series champ Elliott, who finished third in his heat race behind Davenport and Bloomquist, got tangled up with Dakotah Knuckles and hit the outside wall on the frontstretch with 11 laps to go, ending his night at 17th. Busch, an eight-time BMS winner in the Cup Series, drove his No. 51 machine to a win in his last-chance qualifying race, but trailed the lead pack in the feature, ultimately finishing 13th. The trio of drivers will compete in the historic Food City Dirt Race next Sunday, the first time the NASCAR Cup Series has raced on a dirt surface in more than 50 years.

While Elliott and Busch had their issues in the feature race, Larson started the race on the front row in his black and blue No. 6 machine, dropped to third for a bit and then was able to find his groove to pass Davenport late in the race and post the second-place finish.

“My car was tight early and the track was so fast early I was just trying to get in line and figure out where my car would turn,” Larson said. “I finally found a good line that worked for me and if we stayed green I think I could’ve made a move. After the cautions dropped we just never found it again.”

Larson, who won 46 dirt races across the country last season and finished second 20 more times, says he loves the variety of dirt racing and enjoys the Super Late Models.

“I feel like I have a lot to learn in these things, it’s so tight and there’s so much mechanical grip, I get myself in bad spots sometimes, so I have to get better at that,” Larson said. “Being with a great team, they have a great package, so to know I’m going to have a good car every time I’m at the track is awesome. I’ve had a chance to race a lot of different types of cars and I feel like I can adapt quickly.”

The win was Ferguson’s 75th career dirt Late Model victory. Tomorrow night he will go for No. 76 with a big payday on the line.

“Every year we get a little closer to being at the top of the sport,” Ferguson said. “The last couple of years we’ve got a little closer. Hopefully this kind of launches us into a spot where we are considered one of the best. If we show up we want to be one of the guys to beat.

He held off Brady Bjella, Jared Boumeester, Zack Take and Josh Most, who completed the top five.

Dejong was part of the Montezuma High School team that won the Iowa class 1A championship in a 44-41 thriller over North Linn High last Friday at Wells Fargo Arena in Des Moines. And on this Friday he kept that winning spirit going at The Last Great Colosseum.

“I don’t know many 16-year-olds that get this kind of opportunity,” Dejong said. “We went to the state basketball championship last week and got right in the car and drove here last Saturday for practice. I’ve got to thank my family, all the guys in the pits working on the car and getting it ready for every run out here. It’s Bristol, baby.”

“Oh man, I couldn’t look there at the end,” Heckman said. “We were on the gas, I couldn’t see those last eight laps. It’s absolutely overwhelming and amazing to win here. A lot of hard work went into winning this one for sure. I’ve got to thank so many people, my family, just a lot of help and support from sponsors. The big dog was eating, with 750-horsepower. I haven’t driven anything like that in a long time. It was a lot of fun out there.”

There was a question about the MSD chip in Heckman’s engine during post-race inspection, but his car eventually passed and he was officially declared the winner.

Only eight cars were able to finish a caution-filled 602 Late Model feature that included a massive 11-car pileup in turn three with eight laps to go that took out a large chunk of the field. Cass Fowler led most of the race and in the final laps pulled away to take the easy victory in the 20-lap race, holding off Dustin Diem, Kevin Powell, Hayden Swaney and Jamie Maurice as the checkered flag waved.