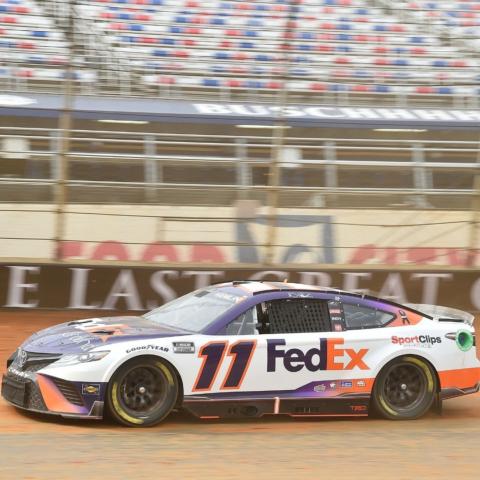 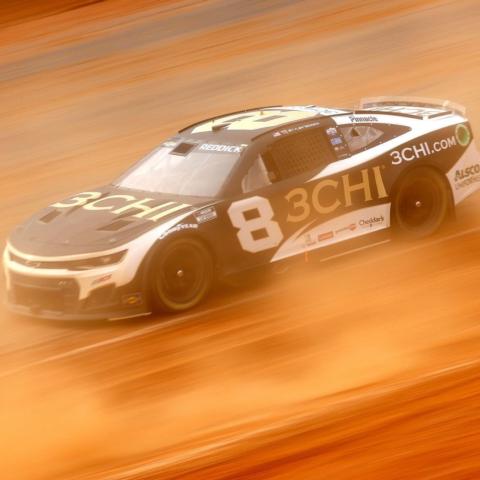 Tyler Reddick was one of the fastest drivers in both Cup practice sessions Friday at Bristol Motor Speedway during Bush's Beans Practice Day. 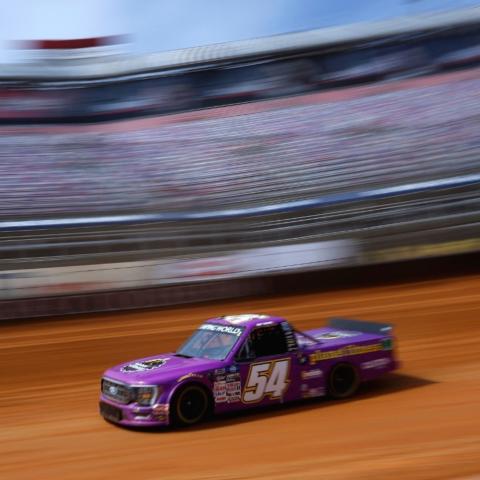 Joey Logano (54) was quickest in one of the two sessions for the Camping World Truck Series during Bush's Beans Practice Day Friday at Bristol Motor Speedway. 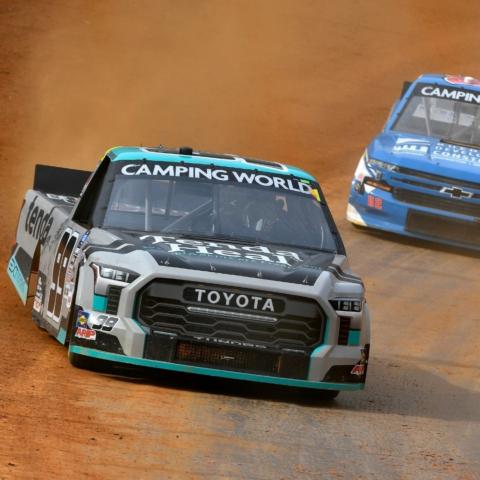 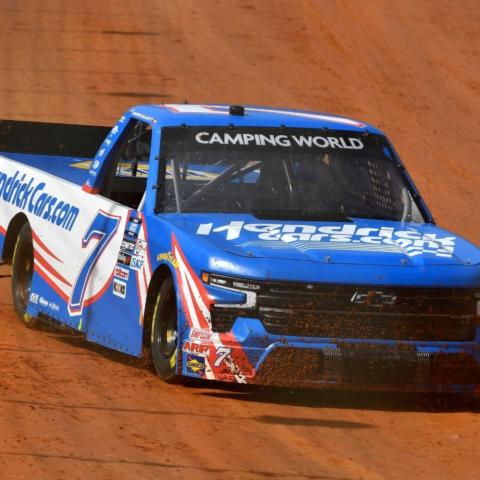 Chase Elliott drove the No. 7 Spire Motorsports Chevy to a top-five performance in the second session for the Camping World Truck Series on Friday during Bush's Beans Practice Day at Bristol Motor Speedway.

Hamlin made contact with the wall early in the opening 50-minute practice sessions, scraping a right-rear fender on his No. 11 Joe Gibbs Racing machine and putting an abrupt end to his first run on the dirt surface. But the team returned in impressive fashion and posted a top speed of 87.218 mph during the second session, leaving Hamlin all smiles after the early struggles.

“This team did a good job between practices,” Hamlin said. “The car has been pretty good all day and I haven’t had a whole lot of issues. I’m trying to figure out where to run, and I feel pretty good about how the car is running.”

Tyler Reddick made the strongest first impression to open up another spectacular weekend on dirt, topping the field during the first practice session on Friday with a lap of 89.924 mph in his No. 8 Richard Childress Racing Chevrolet.

Kyle Busch, who was third-fastest to open the day, was second later on Friday with a best lap of 87.091, and Todd Gilliland was third after going 87.028. Reddick and Christopher Bell rounded out the top five, with Bell’s finish giving JGR three of the top five spots in the second practice.

Busch was consistent throughout both practice sessions, putting him on track to possibly grab another memorable Bristol moment. He was impressed with how the new car handled the dirt, giving him confidence the weekend can be another successful one in a place that has treated him well over the years.

“I’m surprised about the amount of grip this car has,” Busch said. “More drive off of the corners. I think most of that has to do with the tire. The tires are really wide. It has really good footprint on it based on looking at its tread pattern versus an open wheel tread pattern. It matches pretty well versus the truck tire, which is very rounded and crowned. I would say the tires a benefit, but the car everywhere we have been with this thing so far has had added grip. Plus, we are at 100 less horsepower than we were last year, so that’s going to help with the throttle on time as well.”

Like the first session, there were plenty of wild moments to close out the day. Several drivers, including Larson, William Byron, Bell, Austin Cindric, Stenhouse and Aric Almirola, made contact with the outside walls as drivers alternated between running high and low.

Ty Dillon spun out early in the session, while Chase Elliott capped off a day of struggles by getting turned around for a fourth time on Friday. He spun around three times during the first session, but did manage to avoid any damage to his car.

Reddick paced the field during a wild opening practice session. Chase Briscoe was second-fastest to open the day, going 89.753 mph, with Kyle Busch, who has dominated at Bristol over the years, taking third after a best lap of 89.625. Justin Haley and Kurt Busch took fourth and fifth, respectively, while Stenhouse, Ross Chastain, Gilliland, Ty Dillon and Bell rounded out the top 10.

It was a solid starting point for Reddick, who expects track conditions to continue to change throughout the must-see weekend.

“Well, with this car, from what I saw as it transitioned and as it changed – in dirt racing, the line is going to be different just about every single lap as the track changes,” Reddick said. “I think there is going to be a point in time, in the beginning of the race certainly, where one lane is going to be more dominant than the other.

“I think there is going to be a lot of lane choices, based off of just where this tires’ grip is and where the power in this car is, horsepower-wise. But a lot of these things just depend on what the weather does Saturday and how much that really dictates what we can and can’t do to this track Sunday getting ready for our race.”

Like Reddick, Briscoe noticed the changing conditions even during the practice sessions. He’s eager to see how it all unfolds under the lights on Sunday night, which adds another thrilling layer to the unique race.

“I thought it was interesting how we were running the top versus last year we were always on the bottom.  Hopefully, we can race where it’s like that and you can kind of move around,” Briscoe said. “I will say it have more grip than I thought it was going to — like from a forward drive standpoint it definitely had way more grip and we carried way more throttle than I thought we would. I was kind of surprised by that. I’ve never driven a dirt car with this kind of suspension, so that part was interesting. I was surprised, truthfully, how well it drove on the dirt.”

Along with Elliott’s three spins and Hamlin scraping the wall, Logano, Bowman, Ross Chastain and Haley spun during the first practice. Briscoe also slowed late in the practice session thanks to a flat rear-left tire.

Stewart Friesen and Joey Logano led the way during the two sessions during Bush's Beans Practice Day for the NASCAR Camping World Truck Series on Friday at Bristol Motor Speedway, as both impressed heading into Saturday’s Pinty’s Truck Race on Dirt.

Logano, of course, is pulling double-duty as the defending winner of the Food City Dirt Race in the NASCAR Cup Series and looked strong to close out the day in his No. 54 truck with a top speed of 91.006 mph.

Friesen, meanwhile, had the best pass of the day in the opening session, going 92.932 in his No. 52 Toyota. Ben Rhodes was solid during both sessions on Friday, making the second-fastest lap in each of the two sessions to take plenty of momentum into Saturday’s race.

Matt Crafton, Buddy Kofoid and Chase Elliott made up the top five during the second practice session, while top-five drivers in the opening practice also included Derek Kraus, Carson Hocevar and Matt Crafton.

Rhodes enjoyed every bit of his time on the track on Friday, reveling in the dirt environment in Bristol.

"We were pretty quick in practice both times today, and I think it is a whole lot of fun," Rhodes said. "I love that you can throw the truck into the corners, and you will have the banking to catch you. When you just start sliding and sliding and sliding, I mean, some people like that, but I don’t. My feel is when I throw it in there, I want to know I’ve got something to lean on and the banking provides that. I’ve never experienced that before."

Rhodes said he enjoyed racing on dirt at The Last Great Colosseum more than the concrete because he hasn’t experienced much success on the traditional set-up in Bristol. But he’s found a strong footing on the dirt, finishing second a year ago and putting together two strong practice runs on Friday, and he’s looking forward to carrying that over to the race on Saturday.

“I had a really, really fun practice session today,” Rhodes said. “We ran a few laps off of the bat and the crew chief (Rich Lushes) said ‘Alright, that’s enough. Let’s be done for this round.’ After about 30 minutes of watching other people, I got really bummed out that they were having fun and I wasn’t. I begged him to let me go out and he got the truck back on the ground and we put some tires back on it and we went out and ran some laps. That is the happiest I’ve been in a truck at a dirt track ever. This next session we were running through changes and tried to get some sensitivities on what some of the changes are like here, so that way at the end of the stage breaks we know how to adjust the truck. Pretty calm, cool and collected practice for us, but the track is changing a lot to say the least.”

During the second practice, multiple trucks collided, causing significant damage to the No. 02 of Kaz Grala when he made contact with Austin Dillon's No. 20 machine.

Four qualifying heats are scheduled, starting at 4:30 p.m. during Saturday's Bush's Beans Qualifying at Bristol, leading into the Pinty’s Truck Race on Dirt at 8 p.m.