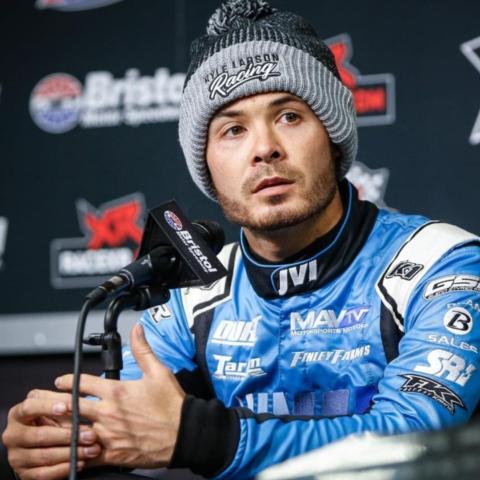 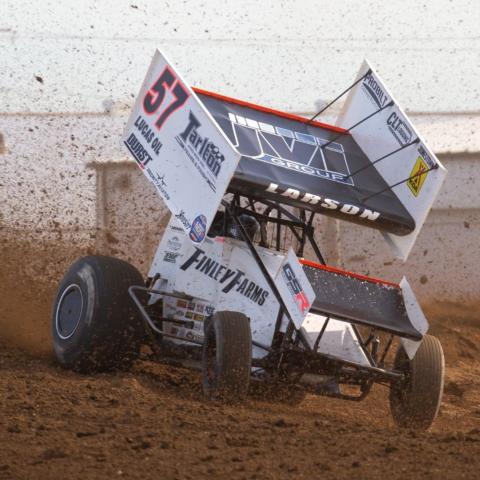 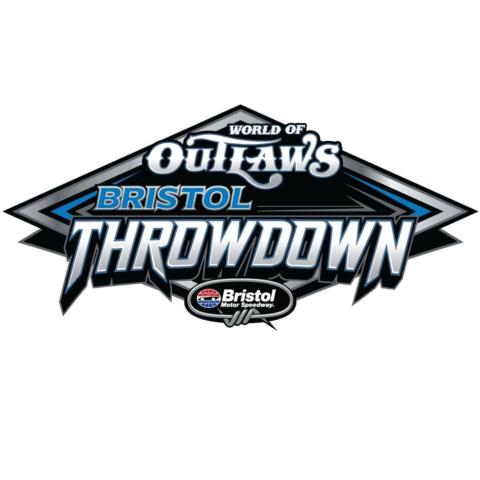 No driver has had more fun with the dirt-transformed Bristol Motor Speedway than Kyle Larson. The self-confessed dirt-obsessed racer is heading to Thunder Valley this weekend for the World of Outlaws Bristol Throwdown chasing another victory in the high-speed World of Outlaws NOS Energy Drink Sprint Car Series, April 22-24.

Larson drove a Super Late Model to a pair of second place finishes in the Bristol Dirt Nationals in mid-March, then shifted gears by driving his No. 5 Hendrick Motorsports Chevy in the historic Food City Dirt Race, the first time the NASCAR Cup Series had raced on dirt in more than 50 years. Larson also competed in the Pinty’s Truck Race on Dirt in a Chevy Silverado for Niece Motorsports during the NASCAR weekend.

This weekend at The Last Great Colosseum, Larson will finish off his grand Tennessee dirt expedition in style, by wheeling Paul Silva’s No. 57 winged sprint car as he tries to add another win to his resume as “The Greatest Show on Dirt” makes its much-anticipated return to Thunder Valley for the first time in more than two decades.

For Larson, a win at dirt-covered Bristol would be a victory he would cherish for a long time to come.

“It would mean a lot,” Larson said. “They've only done this race a couple times. There's not too many people who can say they've won on the dirt at Bristol, so I would like to do that for sure. It's a unique event. You want to win all of them, but you want to win the special ones for sure. This is one of those, and it's a track with so much history and for sure, I'd love to win there.”

For fans who may have never seen the Outlaws in action, the NOS Energy Drink Sprint Cars are lightweight vehicles that tip the scales at 1,400 pounds with the driver and have large adjustable wings and large rear tires that help transfer the car’s power to the track. The 410 cubic-inch engines are loud and fueled by methanol and produce around 900 horsepower. Larson says with Bristol’s 19-degrees of banking and more than 50 feet of racing surface, fans are in for a real treat watching the Outlaws Sprint Cars fly around Bristol.

“It’s going to be ultra-fast racing for sure,” Larson said. “I mean you’ve got sprint cars at over 900 horsepower weighing 1,400 pounds vs. a Cup car at 3,500 pounds and around 750 horsepower. I think lap times will be crazy fast — like 12 seconds. I still think it’ll be fairly similar to other half-miles, though. I just don’t think the pace will slow off as much as it does at other places because you have the banking and the load to carry speed throughout the night.”

Larson won an amazing 46 dirt feature races in 97 attempts across the county last season, an epic total that included an impressive 12 feature victories in the World of Outlaws NOS Energy Drink Sprint Car Series. Last weekend he drove the car to victory in an All-Star Circuit of Champions race at Williams Grove Speedway in Pennsylvania and comes to Bristol riding a bit of momentum, although he says it’s nothing quite near last year’s pace.

“Last year I was racing almost every day of the week, and we built a huge notebook and I was fresh as a driver,” Larson said. “Now, this is only my second race back in the Sprint Car since November so there’s some rust there. The Outlaws are just so much more aggressive than the All-Stars with double-file restarts and such. It’s the little things you have to perfect to be good with the World of Outlaws.”

A star-studded 38-car field is expected to join Larson for the World of Outlaws Bristol Throwdown, including five drivers who competed in the historic World of Outlaws races at Bristol in 2000 and 2001. The Outlaws will be joined at the event by the Super DIRTcar Series Big Block Modifieds with a pile of money up for grabs in both series as well as a few highly-coveted BMS Gladiator Swords available to the weekend winners.

In addition to Larson, the list of potential winners also includes two-time defending series champ Brad Sweet, who drives for Kasey Kahne Racing and has won five times this year at the controls of his No. 49 NAPA machine. The rivalry is a bit personal for Larson and Sweet, who are brothers-in-law.

“I’m really competitive with Brad, I want to beat him more so than anybody and I’m sure the same goes for me with him,” Larson said. “He is having a great year. He is by far the best driver out there right now with the best team. He will definitely be the guy to beat for sure. The World of Outlaws has a really tough field and there's guys who run great at half-miles. The best sprint car drivers in the world will be here and the list of drivers who could win goes on and on. They are hard to beat and we are just a part-time team, but we feel like we do a good job and proved last year that we can win any day of the week. I don't think anybody can go there and expect to win with how competitive it is. It should be fun."

Others to watch are 10-time series champ Donny Schatz, who is seeking a milestone 300th series victory this weekend and was one of the drivers to win a Bristol feature back in 2001, Kraig Kinser, Giovanni Scelzi, and Rico Abreu.

The ground-pounding Super DIRTcar Big Block Modifieds compete primarily in the northeast and all along the East Coast. A Super DIRTcar Series Big Block Modified is a purpose-built open-wheel race car, weighing in at 2,500 pounds including the driver. The 467-cubic inch V-8 engine is fueled by methanol, and produces roughly 650-800 horsepower.

The Bristol dirt conversion took place from January thru March and was highlighted by track operations crews putting down more than 23,000 cubic yards of dirt to cover the famous concrete race surface. The dirt was spread via satellite technology with sophisticated graders and bulldozers to get it in just the right positions.

Fans can purchase their tickets today for the Bristol Throwdown at www.bristolmotorspeedway.com. Reserved grandstand ticket prices are $30 Thursday; $40 each for Friday and Saturday; $80 three-day weekend. Kids (12 and under) tickets are $5 for each day and $10 for the 3-day combo ticket. VIP Parking is available in for $10 per day. Guests are encouraged to purchase their tickets by today, to take advantage of a $5 advance-purchase discount