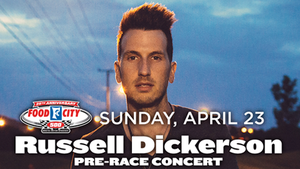 Emerging country music star Russell Dickerson will get fans revved up for the Food City 500 green flag as the Nashville native has been named the official pre-race entertainment by Bristol Motor Speedway officials.

Dickerson, who has headlined numerous venues and toured with Billy Currington, Florida Georgia Line and Canaan Smith, will perform Sunday, April 23 on the backstretch prior to the 1:20 PM driver introductions. Wrestling legend and recent WrestleMania 33 participant Bill Goldberg will get the crowd pumped up when he introduces Dickerson.

"We can't wait to welcome Russell Dickerson to Bristol as he gets the party started for the 25th anniversary of the Food City 500," said Jerry Caldwell, executive vice president and general manager of Bristol Motor Speedway. "He's toured with some of the biggest names in music and has performed solo in some of most iconic venues, including Tennessee's own The Grand Ole Opry. Now he'll get to put on an awesome show for fans at The Last Great Colosseum."

Dickerson's star is quickly rising. With over 37 million on-demand streams and more than 2.9 million views on YouTube, his newest single "Yours" will begin impacting country radio on April 24. Dickerson's EP "Yours" was also a success, debuting at No. 2 on the iTunes country store and the No. 1 album on Billboard's Heat Seeker chart. With his ever growing catalog, Dickerson is ready to be a force to be reckoned with on the country music charts.

"I've grown up around racing and Bristol is a legendary track," said Dickerson, who is currently on the "Home Team" tour with country music star Thomas Rhett. "I could not be more excited to kick off the Food City 500 with a big ' bang!"

While supplies last, Food City 500 ticket holders may add on a Pre-Race SuperPass and be stage-side (on the track) for the concert featuring Russell Dickerson. The SuperPass also includes a Track Walk and track access for Bristol's wildly popular Food City 500 Driver Introductions.