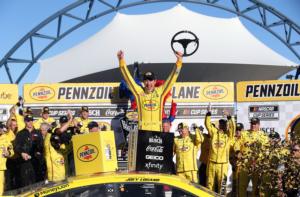 Logano sped away after a restart on Lap 266 of 267 and led runner-up Matt DiBenedetto to the finish under caution to win for the second time at Las Vegas, the first time this season and the 24th time in his career, breaking a tie with Ricky Rudd for 35th all-time.

Logano was one of seven lead-lap drivers who stayed out on older tires when Ross Chastain's spin in Turn 2 brought out the eighth caution of the afternoon on Lap 261. That yellow flag changed the complexion of the race.

But it was Logano who celebrated in Victory Lane after taking the white flag with cars crashing behind him as he started the final lap. Interestingly, because of accidents and pit strategy, the two drivers with whom the driver of the No. 22 Team Penske Ford battled for much of the race—teammate Ryan Blaney and Chase Elliott—weren't in the mix at the finish.

After running solidly in the top 10 in the third stage, DiBenedetto, whose Wood Brothers team is affiliated with Penske, was right there at the end, matching his career-best finish in his second ride with his new team.

"I'm not really sure what I was supposed to do (on the last pit call), but, boy, we fought hard for this one today," Logano said. "Man, what a battle between Blaney and I and Chase Elliott and the 19 (Martin Truex Jr.) earlier in the race, and then to see this finish with Matt finishing second is great day for Wood Brothers and for Team Penske.

"Man, nothing like winning the Pennzoil 400 in front of this amazing crowd with this awesome yellow car right here in the front.  Man, this is a huge win, and nice to kick off the season with a 'W.'"

A push from Stenhouse on the final restart gave Logano the space he needed to pull away.

"You get a good start like that, and I watched him, he pushed me and then he shoved me ahead, which was great, and then the block on the 24 (William Byron), that was the winning move, I was able to get down in front of him and then be able to separate myself a little bit from the field.

"Clean air was going to be key with old tires. If I got swallowed up by a couple cars, I was just going to fall backwards really quick. Being able to get that clean air, secure that.  Man, this is great getting back in Victory Lane."

DiBenedetto took the second spot after he and Byron made contact on the restart. Suffering from a tire rub on his No. 24 Chevrolet, Byron fell back to 22nd during the melee on the penultimate lap.

"This is all just too surreal," DiBenedetto said. "Tough to be that close, but, hey, this is only the second race of the season. So it was the strength of this team. It's so cool to have the backing of all the people that allow me to drive this thing."

Kevin Harvick, whose cars had excellent short-run speed, led a race-high 92 laps but finished eighth after taking tires under the decisive caution. Elliott was out front for 70 circuits and Logano had the point for 54.

Elliott won the first two stages but finished 26th after spinning into the Turn 1 wall with a flat left rear tire on Lap 220.