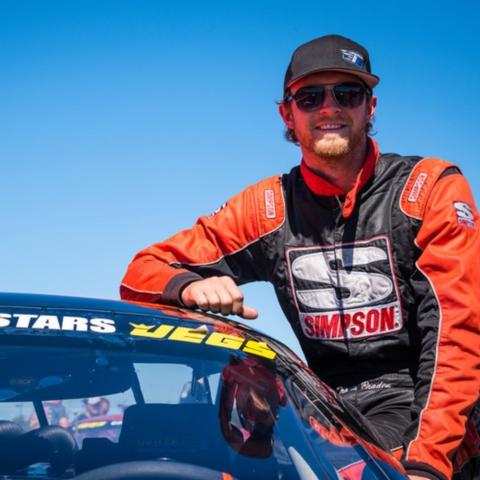 When Travis Braden first visited Bristol Motor Speedway in 2017 for the inaugural Pinty’s U.S. Short Track Nationals, like his fellow competitors, he said he felt in awe of the famed high-banked bullring where he knew so much stock car racing history had been made.

As he returns for Saturday’s fourth annual version of the popular Late Model race where the country’s best short track racers will take the big stage, he comes in with more experience under his belt and is riding a nice wave of momentum from his recent on-track successes.

He is the current points leader in the CRA-JEGS All-Stars Pro Late Model tour and last weekend he claimed victory at the Fall Brawl at Lucas Oil Raceway in Indianapolis. He can’t wait to take the green flag in the 100-lap Pro Late Model feature Saturday night at Thunder Valley.

“That’s the buzz word on our team right now, momentum,” Braden said. “We’ve always had strong performances everywhere we’ve gone the past few years. But you know how it goes in racing, there’s times when you are competitive and it just doesn’t come together for the trophies. Right now we’re on track to keep winning the rest of the year with a lot of big events coming up, starting with this weekend at Bristol. So it’s really a good time to get hot.”

Braden who will compete in Pro Late Model only this season at the controls of his No. 26 Platinum Motorsports entry, raced in both Super Late Model and Pro Late Model in 2017. He studied aeronautical and mechanical engineering during his college days at West Virginia University and says that knowledge serves him well as he embarks on the extreme task of powering a late model race car into the steep corners at Bristol at more than 130 mph.

“We go really, really fast here with these cars,” Braden said. “The corner speed here with the banking is intense. I don’t know what the G-force load is but it has to be incredible. That’s what is so unique about Bristol. You are not off the gas very long, if at all, making a lap here in a Pro Late Model. You’ve got to have a lot of guts to drive it into the corner going pretty fast and rely on the car to stay in one piece. You have to have a lot of faith in what’s going on around you.”

Braden said in 2017 he got caught up in wrecks in both races that ended his day early, but felt like if not for having bad luck he could’ve been there at the end. He says his strategy this time around will focus on limiting mistakes and trying to stay focused on what’s ahead of him on the track.

“To be smart, do a good job in practice and get the car prepared properly and performing well,” Braden said. “Being smart in the race is key because it’s a really fast place and there are things that can happen quickly and if you aren’t paying attention you can wind up in a wreck or ending your day from something simple. I feel really confident we will be performing well enough to compete for the win so at that point the main philosophy for me is to just not make mistakes.”

And in order to win he will need to finish in front of a tough group of competitors. The CRA-JEGS All-Stars tour features many of the top short track racers in the country. In addition to Braden, the field for this weekend’s 100-lap Pro Late Model feature will include Cody Coughlin, Josh Brock, Mandy Chick, Cole Williams and Mason Keller, to name a few.

“The JEGS CRA All-Stars tour is just as competitive, if not more competitive at times, as the Super Series,” Braden said. “A lot of us race in both series, so it’s very competitive. Since we run the crate engines in Pro Late Model the playing field is a lot more even. You have less horsepower. It kind of closes everything up and makes the competition really tough and puts on some intense racing where you are almost wide open the whole time and everyone is really aggressive basically.”

Winning at Bristol would fit the profile for Braden, who has had success taking home several much-desired trophies in big races during his career. In 2015 he won his first ARCA Series race at Lucas Oil Raceway in Indianapolis. He won the famed Winchester 400 in 2016 and last year he earned the coveted Tom Dawson Trophy for winning the prestigious Snowball Derby at 5 Flags Speedway in Pensacola, Florida. Braden's name is etched on that trophy alongside a stout list of past winners of the Snowball Derby, including Kyle Busch, Chase Elliott, Erik Jones, Noah Gragson and John Hunter Nemechek, among others. In earlier days, former Bristol winners Darrell Waltrip and Donnie Allison also won that tradition-rich race.

“What’s so cool to me is if you look at the last decade of winners listed on that trophy, every single driver, except for me now, is competing in the top levels of NASCAR and most are in the Cup Series,” Braden said. “It puts our team in the category of those teams and I am so honored and humbled to put my name in that category and on that trophy. It’s a special feeling.”

Another thing that would give Braden a special feeling is getting to visit Victory Lane at Bristol once the checkered flag falls Saturday night.

“It would be cool to go to Victory Lane on top of a building,” Braden said. “It’s such a unique Victory Lane, I can’t think of too many victory lanes that are set up that way. And they give you a Gladiator Sword here for winning. That is so cool. I would love to be up there on Victory Lane with one of those swords Saturday night.”

In addition to Pro Late Model, the other classes showcased in the event include Super Late Model, Street Stocks and Compacts. On Saturday, teams in all classes will have a final practice starting at 11 a.m., followed by qualifying and then racing will begin at 4 p.m.

A limited number of spectator tickets are available for the race. Fans are encouraged to purchase their reserved grandstand tickets by Thursday, September 24 at 11:59 p.m. in order to take advantage of a $5 discount off of $20 adult ticket prices. Kids (12 and under) tickets are $5. All BMS events now feature mobile tickets. If fans choose to purchase at the gate, fans must have a debit or credit card for payment as cash will not be accepted. To purchase tickets, click here.

Parking is available at Bristol Motor Speedway’s South Entrance on Saturday for $10 via debit or credit card only day of the event. Cashless transactions will also only be conducted for pit passes and concession stands.

Due to the COVID-19 pandemic, spectators will be required to follow Bristol Motor Speedway’s safety protocols and guidelines, including practicing social distancing, having temperature screenings upon stadium entry and wearing masks in common areas like concessions and restrooms. Fans can remove their masks once they are in their socially-distanced grandstand seats. A full list of BMS safety protocols and guidelines are available on the BMS Website.

The sanctioning bodies leading the efforts in 2020 for the Super Late Models are the ARCA/CRA Super Series powered by JEGS, The Southern Super Series and the CARS Tour. The Pro Late Models will be sanctioned by the JEGS/CRA All-Stars Tour presented by Chevrolet Performance. The Van Hoy Oil CRA Street Stocks will oversee their portion of the show, while the Vore's Compact Touring Series will handle the sanctioning of the Front Wheel Drive Compacts.