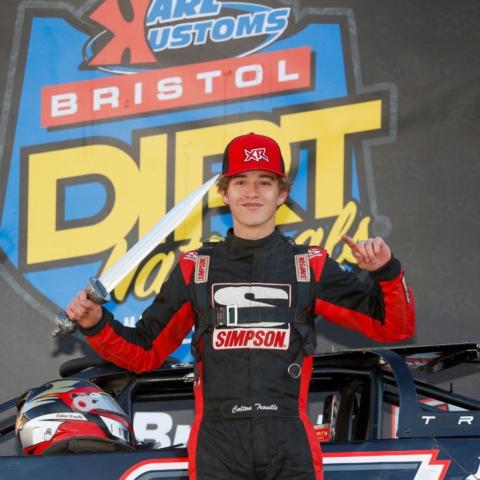 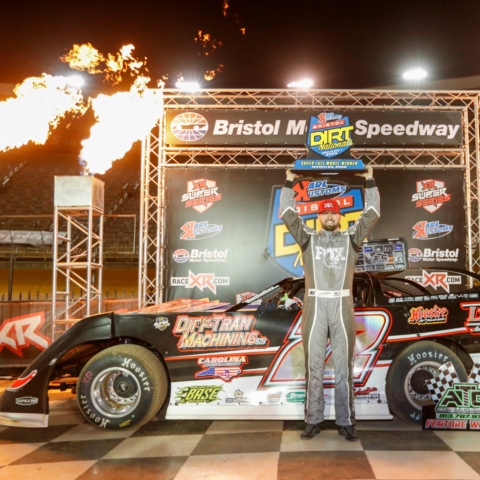 Ferguson overcame a lackluster run last night where he finished 19th and recaptured the form he used last year to win the Friday Dirt Nationals Super Late Model feature for $10,000. He earned $50,000 for tonight’s win in the star-studded 50-lap feature.

“This is awesome,” Ferguson said. “I am so thankful for all the people that are here with me this weekend, and I am so blessed to be in this moment. I have to thank God. This is the biggest win that I’ve had.”

Ferguson, who took over the lead on lap eight, held off a hard charge from dirt racing hall of famer Scott Bloomquist and pole-sitter Ricky Weiss to take the win.

“That car was awesome, it was flawless, it’s the same car I won with last year,” Ferguson said. “Anytime Scott is behind you, you’ve got to be on your game.”

With the win, Ferguson, from Mt. Holly, North Carolina, is now in the conversation to claim the $100,000 total points bonus for the XR Super Series Late Models next Saturday at the end of the two-week Karl Kustoms Bristol Dirt Nationals.

Friday winner Chris Madden had a tough run during his heat race today and started in the back of the pack. He eventually finished 12th. Jonathan Davenport had another strong effort and produced a second-straight fourth place finish.

O’Connor, from Vancouver, Canada, was declared the winner of the 30-lap Modified feature after original winner Shane Demey was docked two positions after his car didn't pass post-race tech.

There was a similar situation in Stock Car as pole winner Vis, who finished second, was declared the winner following post-race tech. Original winner Dallon Murty was docked two positions for a rules infraction discovered on his machine during the post-race inspection.

Georgia native Trouille led all 20 laps of the 602 Late Models feature, and pulled away from the pack to take the victory. Cody Courtney of Knoxville finished second and was followed by Tucker Anderson.

“This car was money, it was perfect,” said the 15-year-old Trouille. “My dad worked really hard on this car all week. I want to thank all the people that support me. It’s Bristol, baby.”

The Karl Kustoms Bristol Dirt Nationals continues Monday with support classes practice for week two. The XR Super Series Late Models return to action on Thursday with their practice session to prepare for their final two feature races, set for next Friday and Saturday, April 1 and 2.