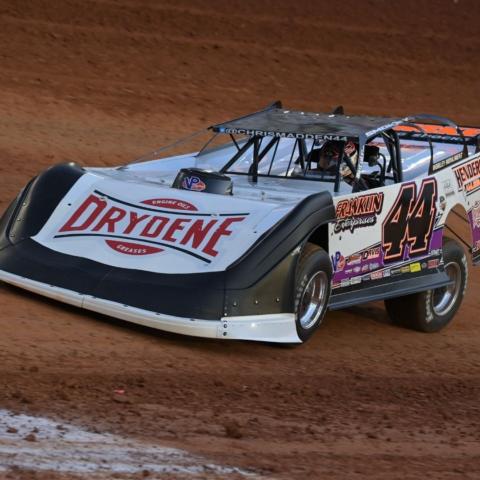 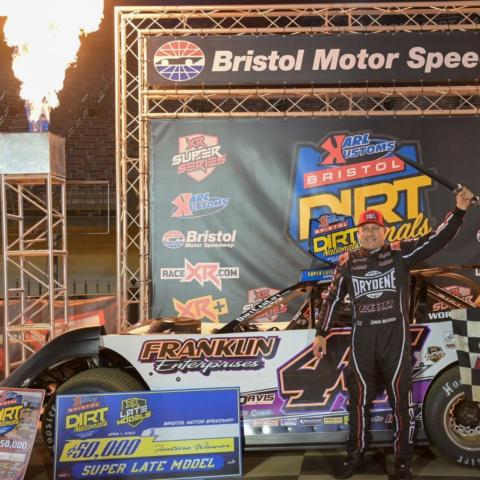 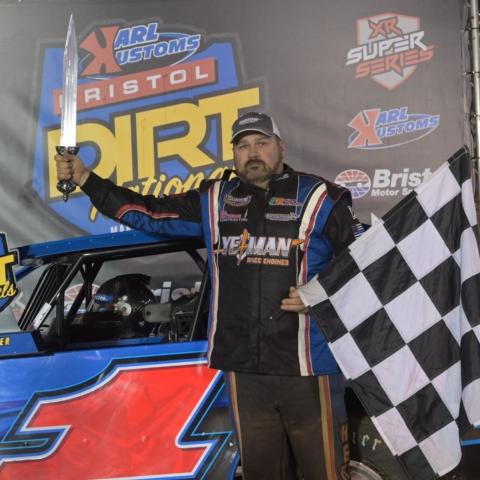 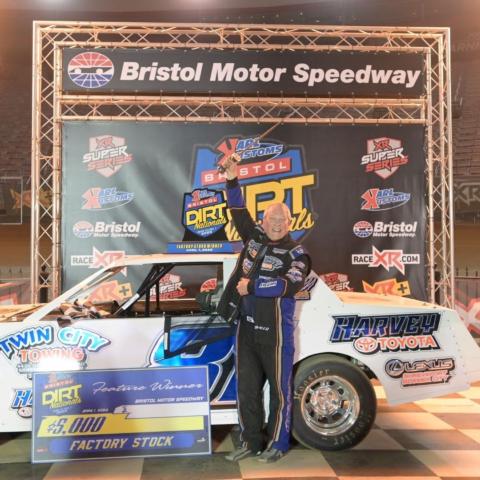 In other racing Friday night at Bristol Motor Speedway, T.J. Herndon claimed another victory in Street Stock while Ricky Ingalls took the win in Factory Stock.

Madden, who earlier in the day set a track record at 14.950 seconds at 128 mph in qualifying, drove his ultra-quick car to lead all 50 laps from the pole and claim his second win in the four-race series over the two-week event. With the win, Madden moved into contention to claim the $100,000 event bonus for the racer with the highest average finish.

“Its pretty awesome, what a phenomenal race car, we had some mishaps last Saturday, but we recovered well,” said Madden, who won last Friday night’s race in similar dominating fashion but finished 12th Saturday. “It’s awesome to be at Bristol and see all the fans out and appreciate all their support.”

Madden, from Gray Court, S.C., says he hopes he can make a similar run in tomorrow’s 50-lap finale to try and pocket the hefty bonus check.

“Our goal is to win races and we have a big points fund going into tomorrow night,” Madden said. “There’s definitely some tough competition here this weekend, but we’ve been fortunate to put ourselves in position to win and that’s what we have to do tomorrow.”

“It takes every bit of it, we’re just thankful and blessed to be able to win,” Madden said. “Hats off to the crew. Thanks to XR for stepping out on a limb to give us racers some great money to race for. We appreciate them.”

Herndon of Atwood, Tenn., swept the week in Street Stock, winning all four of his feature races, including tonight’s 30-lapper.

Herndon held off Morristown’s Austin Adkins, who finished second, and Georgia racer Andy Stewart, who rebounded from a crash last night and overcame a back of the field starting spot to score a third place finish. Dale Nelson finished fourth and Mario Gresham was fifth.

Megan Erwin, who made history Wednesday night by becoming the first female to win a race at BMS, finished sixth.

“I’ve got an incredible team,” Herndon said. “Couldn’t ask to be no better. I don’t know what else to say. My car was phenomenal, we didn’t make a change from the time we unloaded it out of the trailer to tonight.”

Herndon said winning at Bristol, where so much racing history has been made, is the biggest of his career.

“I’ve had some good ones but this one pretty much tops it, especially with the weekend we’ve had,” Herndon said. “My crew works their hearts out. I couldn’t do it without them. My goal this weekend was to make it on top of that building (BMS Victory Lane) one time so I’m just speechless.”

Herndon won four Dirt Nationals trophies for the week, but tonight’s victory earned him a signature BMS Gladiator Sword, which he says he will proudly display at his home.

“It’s fixing to go on my mantle,” Herndon said with a smile. “Sometimes I put my trophies in the living room just to irritate my wife, so the sword is going to go up there when I get home.”

“It’s the greatest accomplishment I’ve ever done in racing," Ingalls said. "This is the greatest place I’ve ever been, when you roll down that hill inside this track you are in awe. I love it. I want to thank God for giving me the opportunity to do this.”

The final night of the Karl Kustoms Bristol Dirt Nationals begins tomorrow at 7 p.m. Spectator gates open at 5 p.m. Grandstand tickets can be purchased online at www.racexr.com or at the gate, starting at $40 for adults and $5 for kids (12-under).