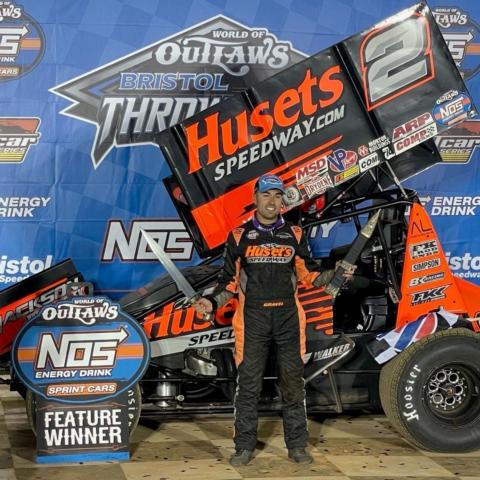 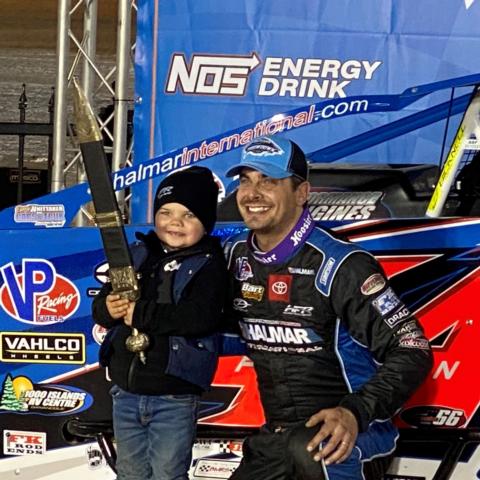 David Gravel set the track speed record in qualifying, won his heat race and then made it a clean sweep by leading nearly every lap in the main feature en route to victory Friday night in the World of Outlaws Bristol Throwdown at dirt-transformed Bristol Motor Speedway.

Gravel, who clocked a BMS track record time of 13.672 seconds at 138.502 mph to qualify on top, took the lead on lap three in the 25-lap feature race by passing Sam Hafertepe Jr. and then led until a caution with six laps to go. Hard-charging Aaron Reutzel challenged Gravel in the closing laps, but Gravel’s No. 2 machine was too fast and he earned the coveted BMS Gladiator Sword in the World of Outlaws NOS Energy Drink Sprint Car Series, the first time the “Greatest Show on Dirt” has visited Thunder Valley in nearly two decades.

Gravel earned $10,000 for the win, his second win of the season and 59th of his career. Reutzel finished second and was followed by Carson Macedo, Hafertepe Jr. and 10-time champ Donny Schatz in the top five.

“This is such an iconic place and I can’t thank Bristol Motor Speedway and World Racing Group for putting this event on, to get that sword is really cool,” Gravel said. “We’ve had a great car since we unloaded. In traffic guys got close to me but I was a little conservative. Those last five laps I was wide open on the top, I didn’t conserve a thing. Those were my five fastest laps of the race and hopefully Aaron wasn’t too close.”

Reutzel finished third in his heat race but his car took off in the feature as he maneuvered his way from mid-pack to the front. He was closing in on Gravel when the caution flag flew with six laps to go as Logan Schuchart had a problem with his wing.

“To go from ninth to second and being two laps away from taking the lead I was feeling good, (Gravel) couldn’t get around the lap cars and my car was so good,” Reutzel said. “After the restart (Gravel) was back to being good again. I felt like we were the car to beat. You have to be good to win these races, but you also have to be lucky and we didn’t have that tonight. We had a great racecar and it gives us something to build on for tomorrow.”

Gravel’s record qualifying lap took away a 20-year record of 138.441 mph held by Sammy Swindell. He hopes he can keep it through the weekend.

“If it cools off tomorrow you never know, somebody could run faster and I may not leave here with it,” Gravel said. “Hopefully by the end of the weekend I will still have the record.”

Friesen became the first Super DIRTcar Big Block Modified winner in BMS history by moving to the top groove late in the race and cruising to the finish to claim the 40-lap victory. He held off Tyler Dippel, multi-time series champ Mat Williamson, Tim Sears Jr. and Mike Mahaney in the top-five.

It was Friesen’s second consecutive victory of the season and the 34th Big Block Modified win of his career.

“Man this is unbelievable,” Friesen said. “This is awesome, this is such a big stage for our series. I’ve wanted one of these (BMS Swords) for so long since we started coming here with the Truck. I tried to watch the Sprint Car race and watched Gravel run up top so I thought I could make it work up there. We have a couple more aces in our back pocket for tomorrow night so we will see if we can do it again.”

Saturday night’s feature races include another 25-lapper for the World of Outlaws NOS Energy Drink Sprint Cars with a $25,000 top prize and a 40-lap, $10,000-to-win race for the Super DIRTcar Big Block Modifieds. Racing is scheduled to begin at 6 p.m.