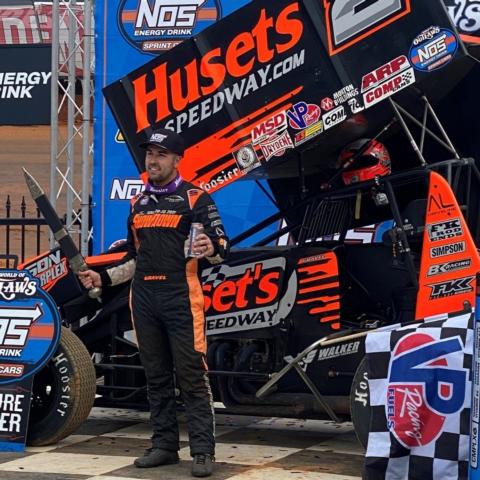 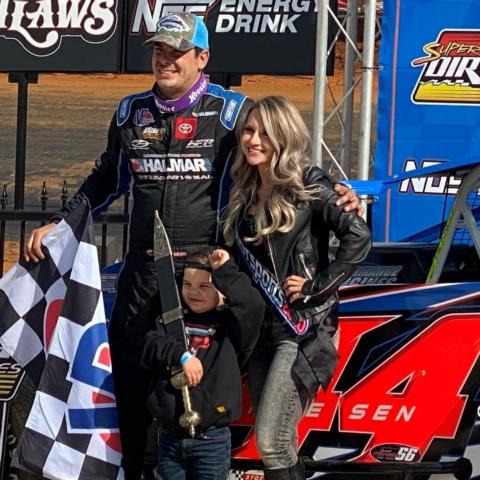 David Gravel swept the weekend of racing Sunday in the NOS Energy Drink Sprint Car Series by taking the checkered flag in a thrilling feature race at the World of Outlaws Bristol Throwdown, the first time the “Greatest Show on Dirt” has visited BMS in nearly two decades.

In other racing Sunday at dirt-transformed Bristol Motor Speedway, NASCAR Camping World Truck Series standout Stewart Friesen also made it a clean sweep for the weekend by taking the victory in the Super DIRTcar Series race.

In the Outlaws feature, pole-sitter Logan Schuchart led 23 of the 25-lap feature race before Gravel reeled him in and passed him with two laps to go. Schuchart’s car then broke which brought out a late caution and set up a final two-lap dash for the cash between Gravel and fellow front-runner Donny Schatz, who was in hot pursuit of his milestone 300th career victory. On the restart, Gravel’s orange and black No. 2 machine got the jump and pulled away, grabbing his third win of the season and 60th of his career.

Gravel, who won Friday night’s 25-lap feature race for $10,000, earned $25,000 for today’s victory and added another much sought after BMS Gladiator Sword from Thunder Valley to his trophy collection.

Gravel, who dominated Friday’s feature, had to navigate his way to the front today. He said his car was a bit sluggish early on.

“I slipped back to third early and didn’t know if I could pass them,” Gravel said. “Our car was a little lazy in the first few laps and just needed to get the momentum going. Logan had a hellacious pace going there and then when he got in lapped traffic he had to slow down and figure things out. He made a couple mistakes, I made a couple of mistakes and so did Donny too. I know Logan hadn’t broke when I passed him, but it must’ve been shortly after that.”

Gravel said he continued to keep his foot in the gas the entire race, he said he was aggressive the entire time as Schatz’ No. 15 car was filling his rearview mirror for most of the race.

“You never give up and just keep fighting and I’m happy it worked out,” Gravel said. “I don’t know what happened to Logan. I felt like we had a good chance with five to go. It seemed like it took a while for my motor to get going. Logan seemed to have more gear or something, but for me it just seemed like I needed time to get momentum built up.”

Schatz, who finished fifth on Friday, passed Gravel for second place at one point in the race and looked like he might power into the lead, but Gravel quickly moved back around him. The 10-time series champ said the track was in good shape despite having to race in the daylight after Saturday night’s racing was postponed due to weather. After a slow start to the season, Schatz’ two top-five Bristol feature finishes are very promising for he and his Tony Stewart-owned team.

“I wouldn’t say we are back, but we had a solid finish today, we had good speed,” Schatz said. “We changed so many things to make it right but that’s just the nature of the beast. The guys have done a great job with the car. I think we were a third-place car there, but we ended up second so we will take it.”

Aaron Reutzel finished third and was followed by Giovanni Scelzi and Paul McMahan in the top-five. Other notable finishers were Carson Macedo in sixth, points leader Brad Sweet at 11th, Sheldon Haudenschild at 14th and Schuchart ended up 19th after his late race issue. Kyle Larson, who posted a sixth place finish Friday, wasn’t able to compete Sunday in Paul Silva’s No. 57 as he had to travel to Alabama for the NASCAR Cup Series race.

Sam Hafertepe Jr. wowed the Bristol crowed by winning the World of Outlaws quick time award during Sprint Car qualifying with a stunning track record performance of 13.326 seconds at 142.098 mph, but his celebration was short-lived as he ultimately had issues early in the feature race and finished last.

In the Super DIRTcar Series feature race, Friesen scored his 28th career victory and third in a row for the season by holding off Demetrios Drellos in the closing laps to pocket another $10,000 payday.

“It’s a testament to this race team,” Friesen said. "All our guys are great. We just had a plan and it worked out for us. I had some speed when I could get in clean air. I needed a long run to get the tires to come in. This is the best afternoon track I’ve ever seen. It’s really cool. It’s unbelievable. This is awesome for Modified racing.”

Friesen has competed at BMS six times in the NASCAR Camping World Truck Series, made his NASCAR Cup Series debut here in the Food City Dirt Race in March and has also raced a Super Late Model at Thunder Valley during the U.S. Short Track Nationals in the past. He has wanted a BMS Gladiator Sword for a long time and now he has earned two in one weekend.

“It was very special to win here again,” Friesen said.  “It was nice to have a day to celebrate in between and rest up and then come back and do it again. It’s a great weekend. I’m proud of the whole race team, it’s a pleasure to work with those guys.”

Drellos, who finished 25th on Friday night, showed some power in the Sunday feature by winning his heat race and then mounting a strong challenge to Friesen in the final two laps.

“If we had one more lap it might’ve been different,” Drellos said. “We did everything we could to get up there but it just didn’t fall our way. It was a roller-coaster experience for sure. I think the trick here at Bristol is that under-adjusting is your friend here. I think our lap notes from Friday really helped us this afternoon.”