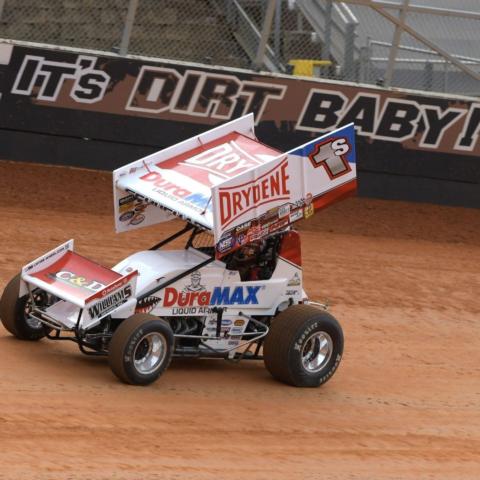 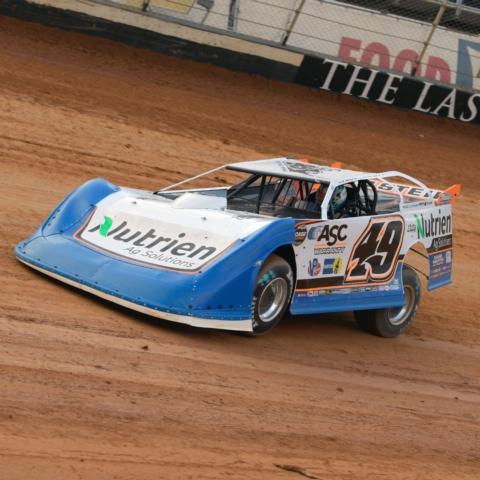 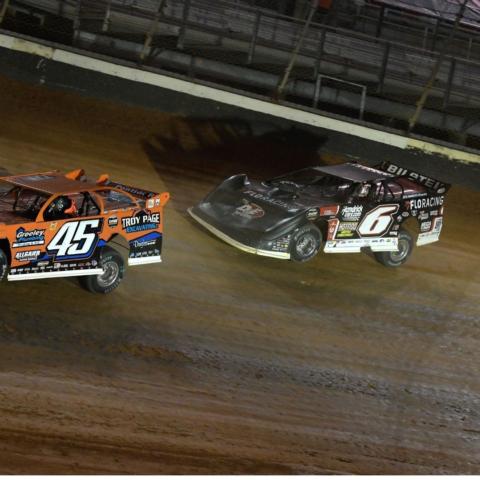 Kyle Larson (6) had to start from the rear of the field but put on a heck of a show and thrilled the fans in a charge to the front in the CASE Construction Equipment Late Model Series feature Friday at Bristol Motor Speedway.

It is the second Bristol Motor Speedway victory for Jonathan Davenport, who drove his No. 49 machine to the CASE Construction Equipment Late Model Series victory Friday in the World of Outlaws Bristol Bash. 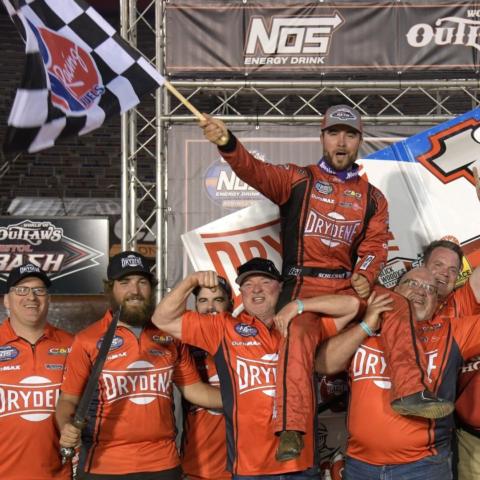 Logan Schuchart waves the checkered flag and is hoisted up by his team after winning Friday's World of Outlaws Bristol Bash.

Schuchart broke a winless drought with a dominating performance, leading every lap of the 25-lap Sprint Car feature to claim his 31st career victory and first ever at Bristol Motor Speedway.

“It couldn’t have felt any better from qualifying on,” Schuchart said. “Just an awesome race car, phenomenal. Really want to thank all the guys who helped out and worked hard including my Grandpa. It was a great team effort. It’s awesome to be on a big stage like this and get this car back into Victory Lane.”

It was a bit of redemption for Schuchart, who led 23 laps here last year in the final feature of the weekend and appeared to be on his way to victory before his engine broke with two laps to go, opening the door for David Gravel to take the win.

“It’s nice to be back in Victory Late, let alone in a facility like this,” Schuchart said. “The car seemed like it almost couldn’t miss. Really felt good all night. I felt like I could go anywhere I needed to go on the race track. I raced with Aaron (Reutzel) early in the night and he was very fast. When we were able to race together I knew we were pretty good.”

This season Schuchart has posted a bunch of top fives and top 10s, but he was thrilled to finally put another W in his victory column.

“We’ve had some good runs and been fast, but have been to some new places this year and trying to figure this car out,” Schuchart said. “We are gaining some momentum. There’s just so many good cars in this series you can’t afford to have any little slip up. If you don’t qualify well you have to start in the back and it’s hard to work your way to the front. It’s easy to over think things and second-guess yourself. That’s what I was doing a month ago and now I’m finding a way to make myself comfortable. I can’t thank everyone who is a part of this team for sticking behind us and working hard.”

In the 30-lap Late Model race, Davenport took the checkered flag but the moonlighting NASCAR Cup Series champ Larson put on quite a show for the fans Saturday night at the World of Outlaws Bristol Bash.

Davenport passed race leader Ricky Weiss with four laps to go and managed to hold off the hard-charging Larson, who had to start at the rear of the field for being late getting to the staging area.

Just as Davenport caught a glimpse of the hood on Larson’s fast-approaching No. 6 machine, Larson’s car got loose and tagged the wall in turn two on the final lap.

“I’m glad I didn’t have a spotter or a mirror because I guess he was coming pretty hard behind us up top,” Davenport said. “It’s great for our team we finally got that gorilla off our back. Just got to thank this whole team. It’s a pretty awesome deal to win at Bristol.”

Larson thrilled the fans with his march to the front. He started 22nd and had passed half the cars in the first two laps of the race. He used the top side of the track to slide through and get strong runs down the front and backstretch. After the race Larson, who is pulling double duty, wasn’t pleased with the penalty. He ultimately finished eighth.

“I want to thank the fans for their support, and I’m glad I was able to give you all a show tonight,” a steamed Larson said, who was supposed to start on the front row. “It would’ve been a lot easier if I could have started up front, but I had a lot of (stuff) to do running in both classes.”

Weiss held on to post a second-place finish and was followed by Kyle Bronson, Scott Bloomquist and Chris Madden in the top five. Newport’s Jimmy Owens finished sixth.

Fans can purchase their tickets today for the Bristol Bash at www.bristolmotorspeedway.com. Reserved grandstand ticket prices start at $45 each. Kids (12 and under) tickets are $10. VIP Parking is available in for $10 per day.