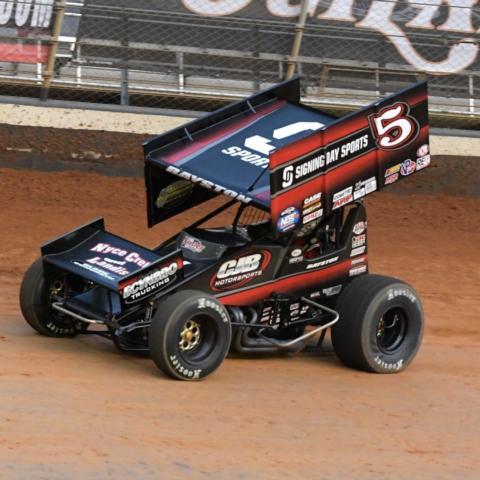 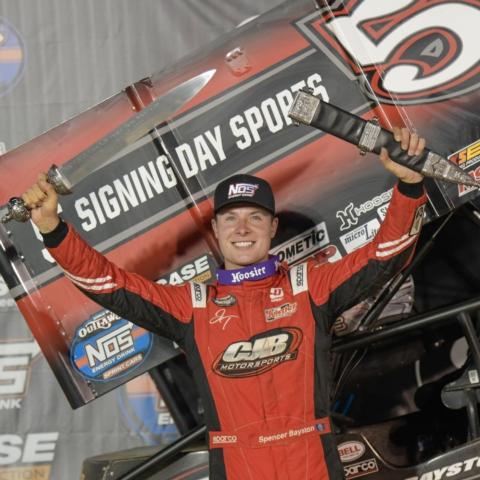 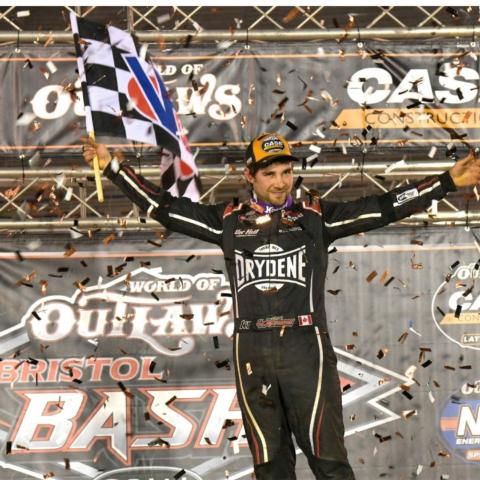 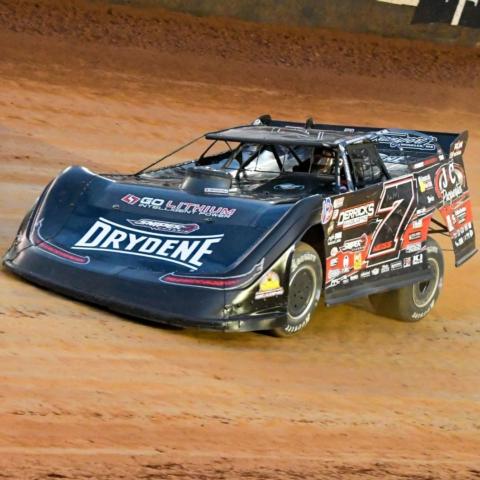 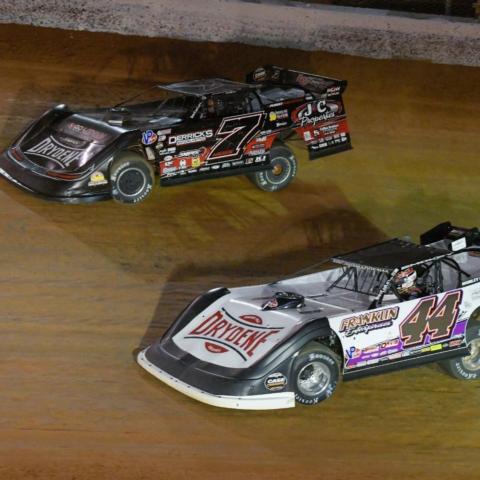 Ricky Weiss (7) held off a challenge for the lead by Chris Madden (44) early in the 30-lap race. The Canadian driver was able to retake the lead and finally earn a Late Model victory at Bristol Motor Speedway. 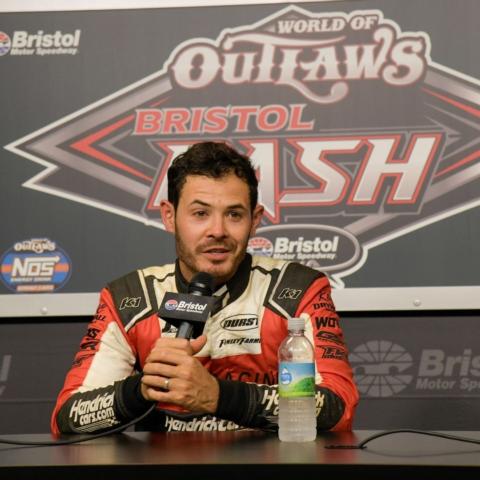 Kyle Larson finished second in the Sprint Car race and fifth in the Late Model race Saturday night in the World of Outlaws Bristol Bash at Bristol Motor Speedway. He will compete in the NASCAR Cup Series race at Dover Motor Speedway on Sunday afternoon.

Bayston led wire to wire in the 25-lap feature in the NOS Energy Drink Sprint Car Series and held off a determined Kyle Larson for most of the race, especially in the closing laps. The two crossed the start/finish line side by side with one lap to go and then Bayston was able to pull away to take the checkered flag.

“It’s been a long time coming, we’ve been so damn fast every night,” Bayston said. “I feel more comfortable than I have my whole career in any race car. This is such a high-risk place with high speed and high reward. I’m so fortunate to be in a wicked-fast car right now. Hopefully we can start clicking off a few more wins now.”

As Bayston kept hitting his marks around the dirt-transformed Bristol high banks, he knew Larson and Schuchart were closing in on him. After a late caution, he was determined to be ultra-focused for the two-lap run to the finish.

“When that caution came out I knew I had to run really, really well in those final two laps,” Bayston said. “Kyle got some good runs on me and he gave me a lane in those final two laps and I was thankful for that. I felt like I had to hit my marks. I was committed to what I was doing and Kyle threw those moves into one and two and three and four, and I circled around him and did what I had to do.”

Bayston said taking the win over Larson here at Bristol is definitely the biggest win of his young career.

“Its incredible,” Bayston said. “To think about all the races I watched here as a kid as a Jeff Gordon fan and Tony Stewart fan, it’s surreal. It almost takes your breath away when you walk into this Colosseum. It’s a great opportunity. Given this opportunity to come here and compete is really cool and to win here at Bristol Motor Speedway at such an iconic place is special. It’s great to get our first win of the season out of the way and get over the hump and hopefully stay on the path we are on to click off a couple more down the road.”

Larson kept the pressure on Bayston all the way to the end of the race, but had to settle for second place in his No. 57 machine. Once again, like he did in the Late Model class the night before, his hard-charging style brought the Bristol fans to their feet.

“I felt like it was going to be close, I got through three really well, I didn’t want to squeeze him in the fence, he was barely able to squeeze around me and win the race,” Larson said. “It was a fun little shootout there and I’m glad we were able to make it fun for the fans. It was a good weekend for the 57. We still have some work to do but I feel like we are in a much better place with the car.”

Schuchart was pleased with his team’s performance to get another podium finish for the weekend. He said he was making a move just as the caution came out, but after that he lost the momentum he needed at the end.

“It was a great weekend for our team, I feel like we had the best car all weekend,” Schuchart said. “We were up there racing for the lead. I didn’t get the best restarts that I needed. I needed to stay green to have the best chance. Proud of another podium finish and props to the five team. Spencer drove his butt off and he didn’t have but an inch between himself, Larson and the wall and he held his ground.”

Abreu qualified No. 1 with a best lap of 13.517 then held off Schuchart to take an impressive heat race victory. After the redraw, Abreu started the feature in the fourth position.

Australian Kerry Madsen, who was impressive in winning his heat race, finished sixth and was followed by Carson Macedo, Donny Schatz, Anthony Macri and Aaron Reutzel in the top 10.

In the CASE Construction Equipment Late Model Series race Weiss was the quickest qualifier, won his heat race and then held on to win the 30-lap feature race.

Weiss received a challenge at the end from Chris Madden, who passed Weiss for the lead on lap 11 but then Weiss regained the lead the for good on lap 13 and cruised to the victory, his first at Bristol Motor Speedway.

“It’s awesome, we’ve been so close here,” Weiss said. “We’ve gave away a couple. When Madden got by me there I thought he had to be really good. Typically, I would’ve just followed him there. He just showed me the fast lane and I was able to get back by him. Thanks to everyone who turns wrenches on this thing. I hope they keep putting dirt on this track every year.”

Friday night winner Jonathan Davenport, from Blairsville, Ga., rallied to finish second in his No. 49 machine.

“My car got better as the race went on,” Davenport said. “About half way through the car came to me. Finally I found the line that worked to get some speed. Ricky did a good job. He deserves one, he’s led three of four of the races here. Good job to him. Just got to thank my guys. It’s been awesome and I hope they keep putting dirt on this place.”

Chris Madden, who won two races and $200,000 at Bristol in March during the Karl Kustoms Bristol Dirt Nationals, appeared to be on his way to winning another race here but this time it wasn’t meant to be.

“When I got by Ricky there I left too much race track open,” Madden said. “I didn’t get down there to clear those guys and Ricky got back to me and took the lead back. I got behind some lapped cars after that. It was a good race tonight, a great race track and I had fun racing with these guys to put on a heck of a show.”