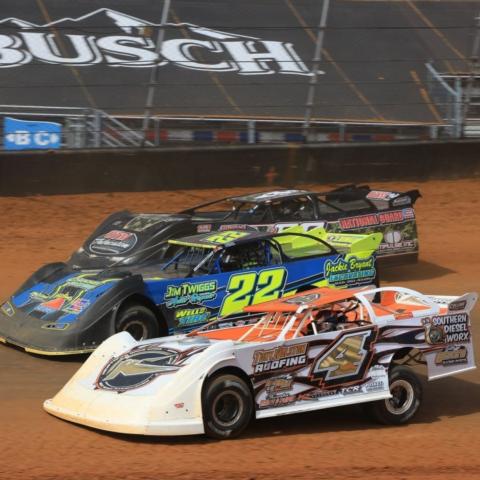 Thursday’s racing for the Karl Kustoms Bristol Dirt Nationals at Bristol Motor Speedway has been canceled due to weather, track and race officials announced.

Friday and Saturday’s race schedule remains the same, with spectator parking lots opening at 1 p.m. and spectator grandstands opening at 2 p.m. each day. Hornets racing was added to the schedule at 9 a.m. on Saturday before spectator gates open.

On Saturday, the Super Late Models will again start the day at 2:30 p.m. with heat laps and group qualifying. At 5 p.m. there will be Super Late Model heat races to set the field for a 40-lap Super Late Model feature that pays $50,000-to-win. Other classes with last chance qualifier races and feature races on Saturday are Hornets, Open Modified, Stock Car and 604 Late Models.

Stock Car feature winners included the father and son tandem of Damon and Dallon Murty who each earned a victory in the first two features. Johnny Spaw earned the win in the final Stock Car feature.

Jesse Sobbing, Ricky Thornton Jr. and J.D. Auringer took feature victories in the Modified class to close out the night of racing on Wednesday.

Complete coverage of the Karl Kustoms Bristol Dirt Nationals is available via live-streaming at www.racexr.plus.

Spectator tickets for Friday and Saturday’s racing are $45 and all fans are encouraged to purchase their tickets in advance by clicking here.

To keep up with the latest updates for the Karl Kustoms Bristol Dirt Nationals, please click here.