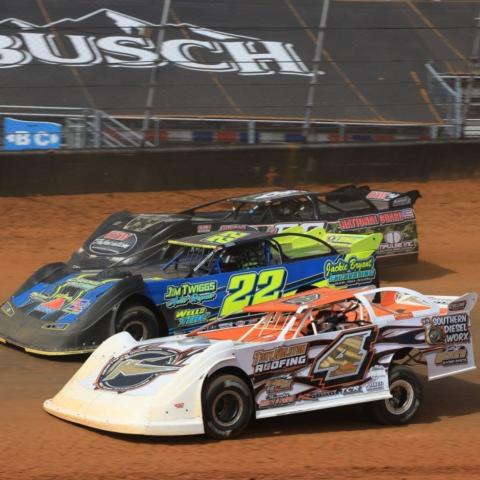 The second annual Karl Kustoms Bristol Dirt Nationals, March 22-April 2, will showcase the best in dirt racing over a two-week period, featuring a total of 11 different classes where a hefty event purse of more than $1 million will be up for grabs.

Spectator grandstands will be open during both weekends of racing (March 25-26 and April 1-2), which will be headlined by the powerful XR Super Series Late Models. There will be a $50,000-to-win feature race for the XR Super Series Late Models to close out each night of racing during the two weekends. For each of those races, payouts will go to the top 24 finishers, with last place taking home $2,500 in each race. The driver who has the best series of finishes over the four-race stretch will pocket an additional $100,000 bonus.

“I’ve always seemed to like the bigger tracks with more speed,” he said. “I grew up on a small bullring when I first started late models. It seems like my driving style fits more of those higher-banked venues that we don’t go to often. It’s not something repetitious. It’s unique and different.”

The other Super Late Model winner from last year, Chris Ferguson, says he will never forget his victory at BMS that Friday night. Ferguson also held off Larson, Davenport and Bloomquist to earn his $10,000 payday.

“We race some big events like the World 100 and Dream at Eldora, the World Finals, but nothing captures that feeling of being inside a stadium like Bristol,” Ferguson said. “Driving up on the roof of a building for victory lane, it was career-defining. That was so big that it didn’t settle in for a couple of months.”

The competition schedule each week will include a Monday practice day for the support divisions. Heat racing and features for those five classes will be held Tuesday-Thursday. On Thursday the XR Super Series Late Models will have a practice session to close out that day’s racing.

The event’s main features will be run on each Friday and Saturday for all six classes, culminating each day with a $50,000-to-win Super Late Model feature race. The weekend race format for each class will include qualifying, heat races, last chance qualifiers and the main event features.

The Tuesday-Thursday format for the support classes will include heat races and features where drivers will earn points to qualify for the main event features on the weekends.

The Bristol Dirt Nationals will be streamed on raceXR.plus and raceXR+ apps, which is available on a number of mobile and television devices under the Monthly Subscription.

Grandstand tickets are available for weekend racing only (March 25-26 and April 1-2) and can be purchased online at www.racexr.shop or at the gate, starting at $40 for adults and $5 for kids (12-under). Please visit the BMS website for information about camping and premium seating options.