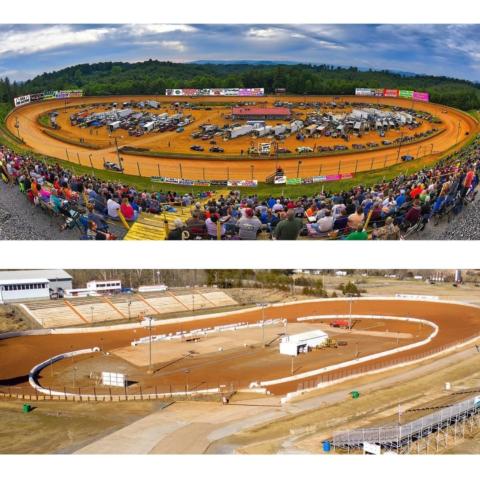 The local dirt racing scene in the greater Appalachian Highlands Region, which covers Eastern Tennessee and Southwestern Virginia, has been thriving for many years. A wide selection of tracks offers weekend fun for fans and many opportunities for aspiring drivers.

As Bristol Motor Speedway has been converted into a temporary dirt track and will host five upcoming races on the clay surface in March and April as part of its 60th anniversary celebration, track officials are also using the opportunity to raise awareness to the vast dirt racing heroes throughout the motorsports world. There are plenty of those heroes right here racing each weekend at dirt racing facilities near Bristol Motor Speedway.

Many of those local dirt tracks have been helpful to BMS officials as they placed the dirt atop of the all-concrete high-banked half-mile oval during the past two months. The first dirt race that will be held – The Karl Kustoms Bristol Dirt Nationals – will feature many of the top local drivers competing against drivers from across the United States in one of eight classes of competition. More than 1,200 drivers have registered for the landmark grassroots racing event.

Landon Stallard made his first trip to Volunteer Speedway at age 7.

“I was amazed at the scene,” Stallard said. “The cars were so fast and there was competition all over the track.”

Stallard, 44, grew up in Kingsport but he accompanied his father on many return adventures to Bulls Gap, Tennessee, for the Saturday night shows at Volunteer.

In 2019, Stallard took his passion for the 4/10-mile dirt track to another level. He bought the facility from longtime owner Joe Loven.

Since then, Stallard has balanced the roles of general manager, promoter and track prep specialist.

“Volunteer is known as the “World’s Fastest Dirt Track” for a reason,” Stallard said.  “This place is super fast and it has a ton of history.”

Each of the historic area dirt tracks are within a 2-3 hour drive of Bristol Motor Speedway. Each features a legacy of famed racers, loyal fans and legendary feats.

“We take a lot of pride in the national success of those guys,” Stallard said.  “Bloomquist was kind of my hero when I was young, and I still go over to his race shop quite a bit.”

Stallard is also friends with Owens, recognized by dirt racing fans as “The Newport Nightmare” and “The O Show.”

“Jimmy kind of started out at Volunteer and he was a regular for years in our Late Model events,” Stallard said. “Jimmy is a super nice guy who has won a lot of big races, but he’s down to earth.”

Volunteer earned national exposure in 2010 thanks to former NASCAR Cup driver Kasey Kahne. During qualifying for a World of Outlaws Sprint Car event, Kahne posted a jaw-dropping lap of 10.258 seconds at 140.378 mph.

Hill, who operates his own engine building business, established the Super Late Model record at Volunteer in 2017 with a qualifying lap of 11.860 seconds.

“If you compare the speeds for NASCAR races Bristol Motor Speedway to a typical Saturday night at Volunteer, there’s not that much of a difference,” Stallard said. “Our banking is 32 degrees in the turns, and there is never a boring moment.”

Charismatic businessman Fred Brown has worked as the owner and promoter at Wythe since it opened in 1970.

With hillside seating and multiple divisions for entry-level and low-budget racers, Wythe has thrived as other short tracks have struggled with car count and attendance.

“We’ve been very fortunate to have a formula that has worked for years,” Brown said. “We have a family-type atmosphere with talented competitors and fans who enjoy dirt track racing.”

Wythe Raceway has been featured during motorsports segments on television outlets ranging from the Discovery Channel and the Speed Channel to Spike TV.

Current NASCAR Cup regulars Tyler Reddick and Austin Dillion have made trips to Rural Retreat in recent years for dirt Late Model events, while other NASCAR drivers in various divisions have honed their power sliding techniques during practice sessions at Wythe.

One of the most proficient and popular figures at Wythe is Duke Bare, a 45-year-old free spirit from Meadowview, Virginia, respected for his versatility as a racer and wizardry as an auto mechanic.

In addition to winning more than 200 races and 20 track titles, Bare served as the mentor to current NASCAR Xfinity Series regular Jeffrey Earnhardt when he began his motorsports career at Wythe Raceway. Jeffrey is the grandson of the late Dale Earnhardt.

Bare credits the car control skills he developed at Wythe for helping him win Mini Stock and Street Stock races held on the same day during a special grassroots event held at BMS.

“A driver can learn so much at a place like Wythe,’’ Bare said.  “I’ve raced at 40 different tracks, including Rockingham and Kentucky Speedway, and there’s no place like Wythe Raceway.”

“If you are a true racer, you will be watching or competing in the Dirt Nationals,” Bare said. “I had to be part of history. It was Bristol, it was dirt, and it was Street Stock. Really, all the dirt races at Bristol will be interesting.”

Tyler Arrington, a 27-year-old dirt racer from Lebanon, Virginia is also fascinated by the ambitious dirt transformation at Bristol.

For the past few years, Arrington has paid his dues on the American Crate All-Star Series, a dirt late model touring organization based in Northeast Tennessee.

Arrington has followed all the headline-grabbing news regarding the makeover at BMS.

“When I caught wind about the NASCAR races in Bristol, I knew this could be a great opportunity for dirt racing around our region,” Arrington said. “When the news came out about the Dirt Track Nationals I figured it would be a big hit, but I didn’t realize just how big it would become.”

Just like Bare, Arrington embraced the chance to compete on his home NASCAR track in the Dirt Nationals.

“We beefed up some certain suspension components to make sure they could withstand the loads the track will produce and also the length of the corners,’’ Arrington said. “The track will be faster than most of us have ever been on before.”

Arrington knows competition. He topped a field of 45 drivers from several states to capture a $10,000-to-win Crate All-Star Series event at Wythe on Sept. 6, 2020.

“I’d love to race Super Late Models on dirt someday, but the cost is almost out of reach for a guy like me that works every day,” Arrington said. “I’m proud to be part of the group of racers that grew up running at tracks like Wythe Raceway and Volunteer Speedway.”

Stallard thinks his track in Bulls Gap helped set the stage for the marquee dirt showcase at Bristol Motor Speedway.

“There are a lot of dirt racing fans and dirt racers in Northeast Tennessee,” Stallard said. “When I took over Volunteer, folks at different tracks were kind of butting heads but we’ve put all our differences aside and worked to correlate our schedules so we don’t have conflicts.”

“Our fans are excited to see the dirt on Bristol,” Stallard said. “It’s encouraging to see NASCAR getting back to its roots, and I think it will help create a new appreciation for the non-stop excitement of dirt racing.”

This is the third of six feature stories in the “Dirt Racing Heroes” content series leading up to the historic running of the Food City Dirt Race at Bristol Motor Speedway on Sunday, March 28, 2021. The legendary BMS half-mile oval has been transformed into a dirt track with 19-degree banking in the turns and will present a challenge to the modern-day Cup Series stars as they race for victory on a clay surface for the first time since Richard Petty won on dirt at the North Carolina Fairgrounds in September 1970.

Allen Gregory is a veteran sports reporter for the Bristol Herald-Courier who covers motorsports as well as many other sports for the newspaper.