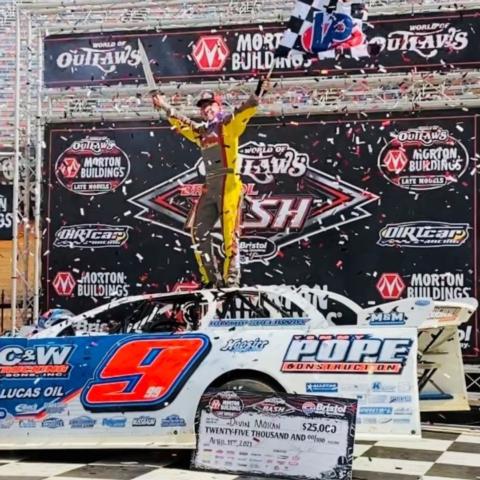 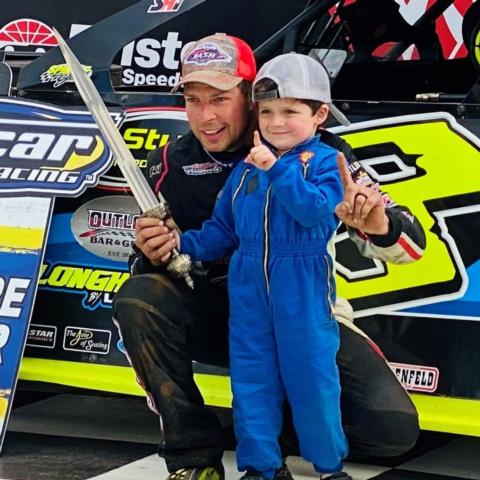 Second-generation racer Devin Moran became the ninth different winner of the season in the World of Outlaws Morton Buildings Late Model Series by taking the checkered flag Sunday at dirt-transformed Bristol Motor Speedway in the weather-delayed final day of the World of Outlaws Bristol Bash.

Moran, who won his heat race over Chris Madden, claimed his second win of the season and his sixth career World of Outlaws Late Model victory, which earned him a top prize of $25,000 in the invitation only 40-lap feature race.

He also earned the coveted BMS Gladiator Sword for the win, which is presented to all winning drivers at The Last Great Colosseum.

“Oh my goodness, this is unbelievable. These cool trophies are getting to be a great collection, hopefully I can keep getting them,” Moran said. “I was six or seven when they ran here in 2000 and 2001, so I barely remember being here when dad was racing back then. But winning here today is so cool.”

In a day that had completely different conditions with dry and slick characteristics compared to Friday night’s race, Moran started second behind pole-sitter Ricky Weiss and dropped back as far as fourth early in the race. He managed to move back to the front later on and was able to get around Weiss, who led the first 30 laps, with nine to go.

“I fell back there a little at first and saw those guys running up top and then I found out the outside was so much better,” Moran said. “We are so blessed. Look at this place, we are at Bristol and we just won, this is awesome.”

Weiss hung on for a second-place finish and was followed by Ross Bailes, Ricky Thornton Jr. and Brandon Overton in the top-five finish order.

Moran said his dad, dirt racing legend Donnie Moran, helped him out this weekend and proved to be a huge asset. Although the elder Moran has more than 150 career dirt Late Model wins, the son moved past his dad on the World of Outlaws career victories list with the finish.

“I want to give major thanks to my dad, he hasn’t been to a race all year and he came down here and gave me some pointers and we showed our speed today,” the younger Moran said. “Around this place, you have to be patient, be patient and be patient and then if someone messes up just get by them. That’s exactly how it played out for me today.”

Friday night winner Josh Richards exited the race on the 10th lap and finished 24th. Other notable finishers included Jonathan Davenport at 8th, Newport, Tenn.’s Jimmy Owens at 11th, defending series champ Brandon Sheppard at 13th, Strickler at 14th, and Scott Bloomquist at 19th. Bloomquist had to change an engine and had issues most of the day as he finished last in his heat race and had to advance to the feature through the last chance showdown.

Strickler, who was impressive in winning his heat race by more than four seconds, showed similar power from the pole position in the feature as he pulled away from the field to take the checkered flag.

“It’s a great way to end the weekend,” Strickler said. “I really love Bristol. Big fast race tracks like this are high up on my list. When I got into lapped traffic and went to the top I knew our car was really good. It really makes me happy to drive this thing and work with these guys. I will be smiling all the way home.”

It was Strickler’s second Modified win at BMS this year as he also claimed the main feature during the Dirt Nationals in March.

“Winning today is right up there with the best and biggest ones I’ve won,” Strickler said. “To come back here and win again is really cool. It is something that we won’t forget for a while that we came to Bristol this year and won both Mod races.

Kyle Hammer finished second for the second time this weekend and was followed in the top-five by Chris Arnold, Ryan Ayers and former NASCAR star David Reutimann. Friday night’s winner David Stremme finished last in Sunday’s feature after getting caught up in a crash on the fourth lap.