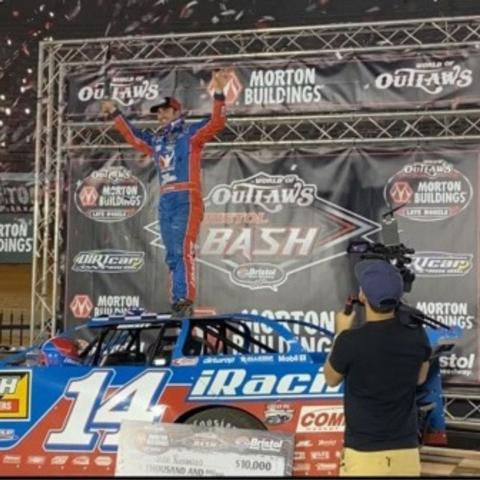 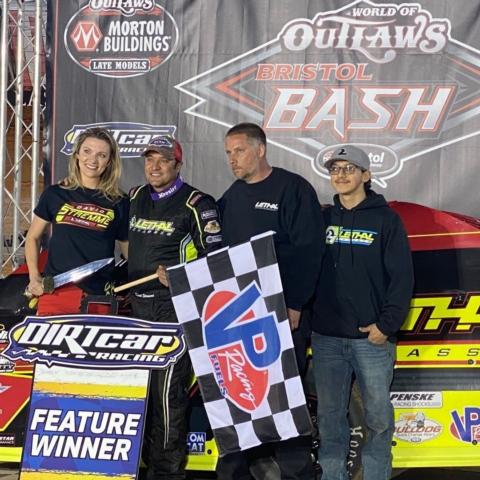 West Virginia native Richards, a four-time World of Outlaws Series Late Model champion who drives for Clint Bowyer Racing, claimed his series-best 78th career victory in his blue No. 14 machine and earned $10,000 for the win in the 40-lap invitation race that featured some of the best dirt Late Model racers in the country.

“I never thought I would win a race at Bristol since my asphalt career didn’t take off,” said Richards, who also won his heat race. “Just a great time to be here. Can’t thank the guys enough, everyone at Clint Bowyer Racing. It was getting hairy out there in lapped traffic. I knew Madden had a really good car and just tried to hold him off.”

The race had several cautions, including one with two laps to go. Madden was gaining ground on Richards before that caution. On the final restart however, Richards pulled away to take the checkered flag.

He says getting a win at Bristol is cool.

“The first one is always going to be the best, but this one is up there for sure, it’s a lot of fun,” Richards said. “Anytime you can win against these guys it really means a lot no matter where it is.”

Madden, who won his heat race earlier in the evening, said he just ran out of laps in the feature.

“We had a good car and just picked the wrong line there on the restart,” Madden said. “I didn’t need that caution at the end. We definitely were good on long runs. If it would’ve been 50 laps tonight I think we could’ve got us one.”

“We didn’t qualify as good as we needed to,” Sheppard said. “We managed to hang on there at the end. Good job to Josh and Chris, they did a heck of a job. It was a fun and clean race. We’re close, we have to figure out qualifying and I think we will be there at the end.”

Rick Eckert and Brandon Overton rounded out the top five in the Late Model race.

North Carolina’s Stremme, a former NASCAR driver who posted a fifth-place finish at Bristol Motor Speedway in the Xfinity Series and a ninth-place finish in the Trucks at Thunder Valley, held off Kyle Hammer for his first-ever Bristol victory.

“When you walk in here you have to look around, just to win at Bristol is amazing,” Stremme said. “It’s very special and very demanding, physically on the car and on the driver mentally. Bristol is not a place you mess around with. You’ve got to respect it. It’s just an intimidating place. You look around at these big grandstands. For me, I am used to all that so I think that was an advantage. I’m just very proud to win here.”

Saturday’s Morton Buildings Late Model Series race will feature a 50-lap race with $25,000 going to the winner. The UMP Modifieds will battle for a $10,000 winner’s prize in a 20-lap race.