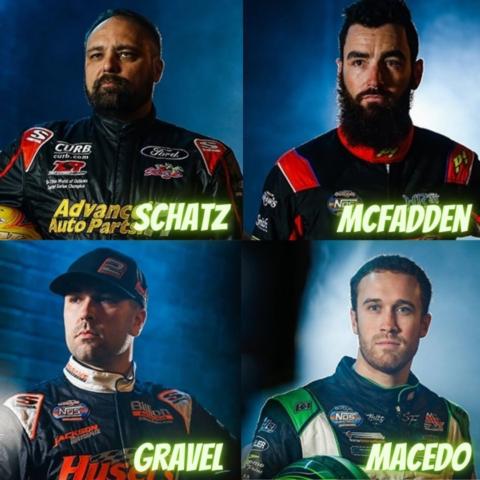 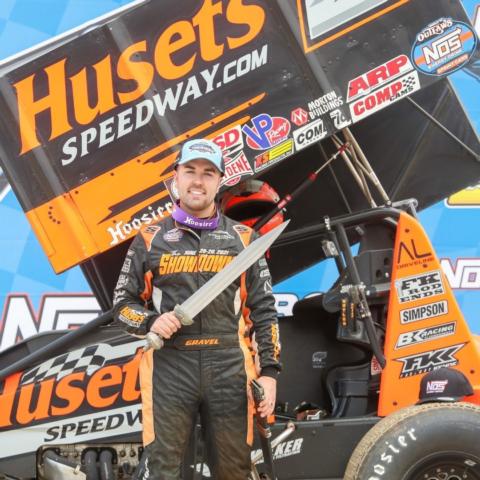 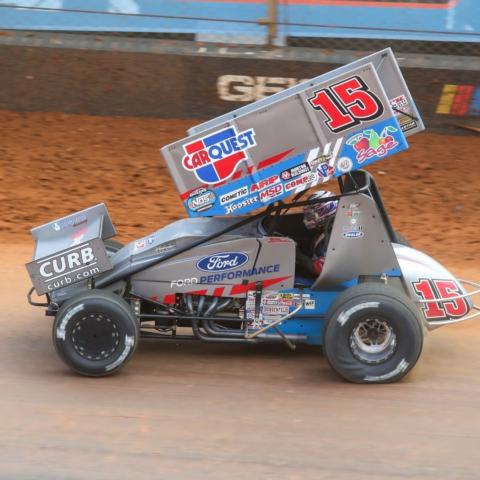 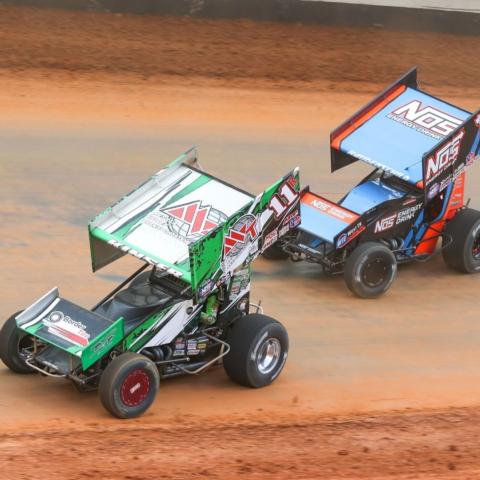 Veteran racer Kraig Kinser (11) says a driver is on the edge constantly during a high-speed lap around Bristol Motor Speedway in the World of Outlaws NOS Energy Drink Sprint Car Series. 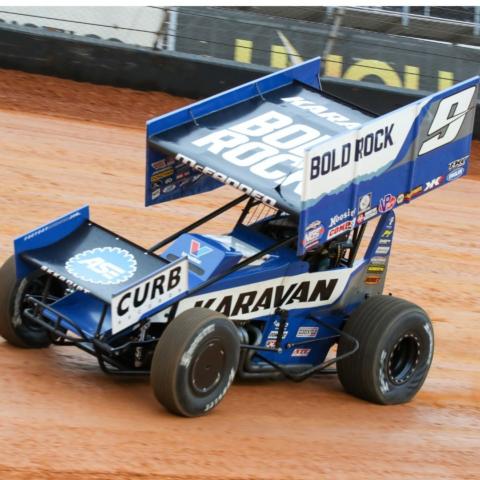 The Greatest Show on Dirt returns to The Last Great Colosseum April 28-30. It is the fourth time in history that the World of Outlaws will race on the high-banked dirt-transformed half-mile oval. Last year David Gravel took the checkered flag in both of the feature races at Bristol Motor Speedway to make for a memorable weekend. This year the race will feature both the NOS Energy Drink Sprint Car Series and the CASE Construction Equipment Late Model Series competing together in what promises to be an amazing weekend of dirt racing. Several of the top drivers in the World of Outlaws NOS Energy Drink Sprint Car Series gave us their thoughts to five big questions leading in to this weekend’s World of Outlaws Bristol Bash.

How much fun did you have last year at Bristol?

DAVID GRAVEL: It was a little nerve-wracking going there for the first time and the practice day to see how fast the cars were and they were very fast, but to sweep the weekend was definitely a great feeling and you couldn’t ask for any more.

CARSON MACEDO: I had a lot of fun at Bristol last year. I’m excited to go back, I think it’s a fast race track and I think the fans are in for a treat with both the World of Outlaws Late Models and World of Outlaws Sprint Cars.

DONNY SCHATZ: I was there at the original Bristol on dirt back in the early 2000s. I was a lot younger and the speed was nothing like we’d ever experienced before other than places like Eldora. The bank was incredible. Just to see that Colosseum and be in that atmosphere was incredible. A lot of emotions flowed through me last year. It was great to be back. Obviously we’re even faster, which makes it super-exciting but also there’s a fine line on whether it’s beyond scary for a guy like me or super fun as well.

Was there anything you learned last year that you plan to apply this year?

CARSON MACEDO: A few things I learned last year that I plan to apply is just the high speeds, keeping the car nice and straight. When you’re going that fast, these wings are nice and big. They like to cut through the air really nice. The straighter you are the faster you’re going to go and the better these race cars handle.

DONNY SCHATZ: I don’t know that you can take dirt off of Bristol then put dirt back on Bristol and think anything you did last year is going to be the same thing. I think they changed the bank up a little bit again. I know they’ve made it a little wider in certain areas. What was applied 20 years ago didn’t apply last year. It all relies on what these guys do with these cars and the things they do to keep the speeds going. We don’t normally get in the sprint car world to where you trim the car in order to get more speed, but man Bristol is that way. There’s so much speed and so much downforce that you end up doing that and it’s one of the very few places that happens.

It’s rare, but how cool will it be to have both the World of Outlaws Sprint Cars and Late Models competing at the same event?

JAMES MCFADDEN: Yeah, that’ll be really cool. I enjoy watching the late models. I got to see the World 100 once so to watch those guys around there will be really fun. It’ll be a good event for the spectators for sure.

DAVID GRAVEL: We did it I believe at Cedar Lake one time and then we did it at obviously the World Finals, but for me it doesn’t really matter too much, we’re so focused on the task at hand and what we got going on. Staying on top of the race track, communicating with my team so it’s one of those things where you’re just laser focused. When we were there last year I don’t think I watched one lap of the big block modifieds. I’m just trying to do what I can to win races and be very focused.

CARSON MACEDO: It’ll be really cool to have both the sprint cars and late models at the same event. I think with an action-packed track like Bristol and huge grandstands with plenty of race fans to come check it all out. I think it’ll be a success and I’m excited for the two straight, good nights of racing.

DONNY SCHATZ: I’m optimistic about everything, having both classes at the same event. We don’t have it very often, we have it at the World Finals in Charlotte. We had it at Cedar Lake a couple years ago. If you take those two events one was successful and I think one was not as successful as they want for track conditions. I’m really unsure about what’s going to happen, but I think it’s going to force them to do a lot of track maintenance and work that probably wouldn’t happen if the late models weren’t there because there are really demanding tires on the surface. All I can do is speculate and see what happens. I’m sure they’ll make the best of it.

What would it mean to you to be able to win an iconic Bristol Gladiator Sword?

CARSON MACEDO: It would mean a lot to me to be able to win the Bristol Gladiator Sword. It’s definitely a race track that I’ve always thought was really cool as a little kid playing the 2002 World of Outlaw Sprint Car game on PS2. A dream that I’d be able to race there someday, let alone win. This JJR car is really good especially on big half miles like that so I’m looking forward to going there.

DONNY SCHATZ: It would be really cool to win at Bristol, to win the sword. Just to win, the older I get the more I appreciate all these wins. I appreciate everyone I’ve got. They’re coming fewer and further between. That’s just the nature of how competitive the sport is and how things are. To be able to get a win there, we were close last year. We ran second the final night, so that sticks in the back of my mind. Second is something that a lot of people would be OK with, but it’s not what you want when you’re that close. You want that win and that extra edge so we’re pulling out all the stops. These guys are working hard to build a special car for Bristol and I’m hoping we can get that win for them and that gladiator sword. I’m definitely going to enjoy it if we do.

How cool was it to win a pair of Bristol Gladiator Swords last year?

DAVID GRAVEL: Obviously walking into that place is unexplainable unless you’re there in person. To play the old 2002 video game and see old videos, to finally get to race there and sweep the weekend and get those swords is very cool. This year it pays a little bit more on the first night so hopefully we do that again.

What did you do with your swords?

DAVID GRAVEL: Tod [Quiring] kept them, the team owner keeps the trophies, but he was able to purchase me two replicas which are the exact same thing. I have a trophy room that is now turning into a baby room so all my stuff is laying in a pile. I do want to mount those up really cool looking and have them crossing. Right now they’re sitting in my room, but I’ll have them displayed in a cool spot one day.

Can you describe what you see and feel when you’re at full speed on a lap around Bristol?

JAMES MCFADDEN: Nah, not really, it’s all a bit of a blur, you know. We tend to not go as fast as we do there at most places. It’s just a lot different, you have different pick up points with your eyes because you’re going faster and stuff like that. It’s fast, it’s pretty intense; it’s a lot of turbulence in the car and to do a lap around there with the big colosseum feel is pretty crazy.

KRAIG KINSER: You really don’t realize how fast you’re going until you start pushing over the limit a little bit or doing something you don’t want to do then you feel the speed come up a little bit. I mean we go to fast tracks, don’t get me wrong; you get that feeling quite a bit, but just pushing that little bit extra you realize you’re on the edge.

DAVID GRAVEL: Actually the straightaways feel like they take forever and they’re long, but you really feel the speed going into the corners and going into the banking. There’s a lot of G-force and the corners go by very, very fast. It’s like going on a rollercoaster where you get a lot of pressure on your shoulders and your head and then the speed just happens really, really fast. It’s pretty physically demanding. When you’re by yourself it’s easy to go around there, but the corners are very physical.

DONNY SCHATZ: What you see and feel at Bristol is quite a bit different from everywhere else. I haven’t been at speed like that where your head moved around and buffeted. We all have the best safety equipment. We all have the best helmets and all these things. I remember my head moving enough to where it created an issue where trying to keep your eyes focused on one thing at speed was pretty crazy. You feel every little vibration, every little flaw in a tire. It creates such a high frequency vibration that everything affects you at those speeds. You’ve got to be very cautious, things happen in a hurry.

CARSON MACEDO: Basically, it’s intense. The speeds are the fastest we see throughout the World of Outlaws season. It will definitely be the fastest we go all year and I’m looking forward to the high banking and all of the things that are different compared to a lot of the race tracks we go to across the country.